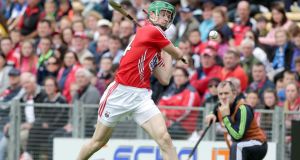 Séamus Harnedy is one of six changes for Cork’s game against dublin at Croke Park on Saturday. Photograph: Morgan Treacy/Inpho

Cork hurlers come to Dublin on Saturday looking for their first win of the current Allianz League Division One A campaign and manager Kieran Kingston names a much changed side from that which lost to Waterford in week two of the competition.

Injuries keep out Colm Spillane, whose season is over because of a cruciate ligament rupture and Aidan Walsh, who underwent surgery for a broken nose sustained in the last match. Shane O’Neill is sitting exams, whereas William Egan, Lorcán McLoughlin and William Leahy drop to the bench.

Others missing are the suspended Alan Cadogan and another defender, Conor O’Sullivan, is still ruled out with a groin injury.

Tyrone have changed half the side that won in Portlaoise last week. Niall Morgan replaces Michael O’Neill is goal in one of seven changes.

Roscommon make only one change to the team that started last week’s big win down in Cork. Joint managers Kevin McStay and Fergal O’Donnell bring in Conor Daly for his brother Niall, who he replaced against Cork after the latter picked up a facial injury, which still keeps him out for this week’s match against Down, now switched to Longford.

One more win is likely to assure Roscommon of retaining their Division One status next year.

There is one change on the Monaghan team to play Mayo. Daniel McKenna is named at full forward in place of the injured Kieran Hughes. Otherwise the team that were unlucky to lose against Dublin last week remains intact.