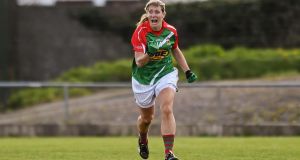 Cora Staunton kicked a glorious late winning point in the seventh minute of additional time to steer Mayo into a first Lidl Ladies’ National Football League Division One final since 2013.

The Westerners were seven points down at the break but Staunton’s late, late effort, her 11th point of the afternoon, put Mayo ahead for the very first time in the game and they held on in the closing seconds to set up a final clash with holders Cork in a fortnight.

Mayo won their eighth successive game of the 2016 League season and now have the chance to avenge their final defeat to Cork three years ago, as they aim to clinch top flight silverware for the first time in nine years.

At St Brendan’s Park in Birr, the game looked up for Mayo as they lost Rachel Kearns to a red card late on, for a second bookable offence, but Frank Browne’s charges showed real character to pip the Kingdom at the death.

The breeze advantage in the second half was certainly a help to Mayo as they set about eating into a 1-4 to 2-8 half-time deficit.

Staunton will grab the headlines for another match-winning haul, which included nine frees, but Kerry’s Sarah Houlihan was the player of the match with an individual tally of nine points, five from play.

Houlihan was desperately unlucky to find herself on the losing team but after taking a pass from Sarah Rowe, Staunton booted the winner from distance to preserve Mayo’s 100 per cent record this year.

There was a remarkable opening to the game as Laura Rogers netted for Kerry with just over a minute on the watch but that goal was cancelled out almost immediately by the opposite number 15, Mayo’s Niamh Kelly.

It was tit-for-tat fare in the opening exchanges and the sides were level again at 1-3 apiece before Kerry opened up a decent lead.

With Rogers and Houlihan on song, Kerry managed to assert some dominance and their second goal arrived in first-half stoppage time, Anna Galvin cutting in from the left touchline before unleashing a powerful drive past Yvonne Byrne.

That goal came at a time when Mayo were under the cosh and playing with 14 players, after Clodagh McManamon was sin-binned.

In that opening half, it was Kerry’s inside line that inflicted the damage on Mayo as Houlihan (0-5), Galvin (1-0) and Rogers (1-2) accounted for all but one point of their tally.

Houlihan added four further points in the second half but Kerry had goalkeeper Edel Murphy to thank for some fine second-half saves as Mayo came storming back.

Kerry, who lost Kate O’Sullivan to the sin-bin, were finally pegged back when Rowe equalised and there was still time for Staunton to loft over that incredible late point.

There was some positive news for Kerry as ace forward Louise Ní Mhuircheartaigh returned to action following some time out with a neck injury.