Bubbles halts the Joe Show as Tipperary save a draw 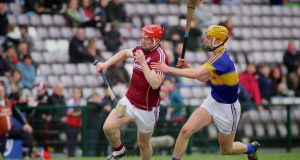 Galway need a win away to Waterford to avoid a relegation play-off against Cork thanks to a late equaliser from John O’Dwyer for Tipperary at Pearse Stadium.

Seconds earlier Joe Canning looked to have given Galway the win with a brilliant sideline cut from the right, but in a fitting end, a half that saw the lead exchange hands seven times, was brought to an end with O’Dwyer’s leveller from the right wing.

As a result of this result, if Tipperary beat Cork at Semple Stadium next Sunday, Michéal Donoghue’s side need to beat Waterford by a margin of 14 points more than Tipp win by to avoid a relegation play-off with Cork.

Donoghue will be pleased with certain aspects of his side’s performance, but their poor return from their own puckouts, the fact that they were bossed at midfield, and another slow start to the game will frustrate the Clarinbridge man.

That early lethargy saw Galway trail by 1-3 to 0-1 after nine minutes. Niall O’Meara’s early goal was laid on by Noel McGrath as Galway struggled to cope with Tipperary’s aerial dominance, but once Jason Flynn and Canning pointed from play Galway began to improve.

Canning hit six frees before half-time to keep Galway in touch after some really poor play in the opening 35 minute, but when Tipp hit five points without reply from the 15th to 28th minutes they looked likeliest winners.

But Canning inspired a comeback from the home side before the interval. Instead of trailing by seven points - as they did seven minutes from the break - Galway trailed by just 1-10 to 0-9 after Canning latched onto to Aidan Harte’s great diagonal ball to rattle the net two minutes into injury-time.

Galway were soon level when Canning landed another free a minute into the second-half and when Iarla Tannian’ miss-hit shot found the net in the 42nd minute Galway took the lead for the first time.

Half-time substitute O’Dwyer began to have an impact with a good point four minutes later as Tipp took the lead again, but Canning, Jason Flynn and Niall Burke all hit great points from play as Galway improved as the finish-line appeared.

Padraic Maher and Noel McGrath then appeared to have given Tipperary the edge with two points to level the game in injury-time, but after Canning split the posts from the sideline cut, O’Dwyer sealed a crucial point for Tipperary.

Stephen Kenny vowing to do things his own way, an Ulster final like no other 08:14
Ireland boss Stephen Kenny: ‘I’ll do things my own way. Put it that way’ 06:00
Mickey Graham calls for some clarity from GAA on championship plans 06:00
Whole new ball game: Hats, scarves, facemasks - An Ulster final like no other 06:00
Damian Browne: To the ends of the Earth in search of the ‘savage warrior spirit’ 06:00
Crossword Get access to over 6,000 interactive crosswords