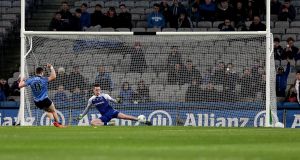 Thoroughly enjoyable fare for the last Saturday in February, with Dublin ultimately breasting the tape no more than a floating rib clear of Monaghan. Two late points from Cormac Costello and Bernard Brogan robbed this for under the noses of Malachy O’Rourke’s side, just as they had more or less robbed it from under Dublin’s. Brogan’s in particular was a fantastic score, worthy of winning any game.

On a crisp night in Dublin 3, there was enterprising stuff here from both sides. Monaghan did onto Dublin as Dublin have done onto others – took their kick-outs quickly, moved upfield at pace, fed their inside line of Darren Hughes and Conor McManus sharp, early ball.

In reply, Dublin had to be patient in the face of Monaghan’s double sweeper – and though it took a while, they switched from a kicking game to a running game eventually and made their hay that way.

McManus was in one of those moods where he’s best described as just one step down from an alien. Having given David Byrne a scalding here in the league last year, he came out intent on picking up where he left off. From four touches of the ball in the opening 20 minutes, he scored three supreme points and set Hughes up for another.

His two from play were instinctive clips from away out on the right, his first free a booming effort from 50 metres on an angle. He ended the night with 12 points, all but three from play. If and when Monaghan find another route to the scoreboard to share the burden with him, they will be dangerous. Until then, you suspect they’ll remain at arm’s length from the top sides.

Thanks in the main to Monaghan’s two-time All Star, they led 0-7 to 0-2 after 17 minutes. Dublin were a little stand-offish in that opening period and had a couple of communications snafus – especially from Stephen Cluxton’s kick-outs. Kieran Hughes and Kieran Duffy both landed terrific scores and the Monaghan chunk of the 17,080 crowd had something to take the chill of the evening out of them.

But Dublin are a thinking side as well as a footballing one. Gradually, they worked out that the way to penetrate the Monaghan defence was to run at them and draw them into either positional mistakes or fouls. Philly McMahon stole forward for his customary couple of points, Emmet Ó Conghaile jinked inside two flailing tackles to pop one of his own. Dean Rock did his duty from frees along the way and it all washed out to Dublin leading by 0-10 to 0-9 at the break.

Monaghan will have wondered how they went from a comfortable enough position after the opening quarter to being behind at half-time but Dublin have taught harsher lessons to better teams. And the All-Ireland champions looked to have found their groove son after the restart when Rock extended their lead with another free before Diarmuid Connolly put them five ahead with a penalty.

It was Paul Flynn, playing his first game of 2016, who won the spot kick, latching onto a breaking ball 10 yards from goal and finding himself the meat in a sandwich between two Monaghan defenders. Connolly endured a fair bit of jawing from Fintan Kelly as he lined it up but he dispatched it all the same – with just under half an hour to go, it meant Dublin were 1-11 to 0-9 to the good.

That, we presumed, was that. But Monaghan kept at it. Much like Dublin in the first half, they inched their way back into matters with frees. McManus kicked four of them on the spin after Connolly’s penalty and Dublin didn’t register another score for 15 minutes. In between times, Shane Carey had a fantastic chance to slot home a goal for the visitors but McMahon dived to get a fingertip to his shot and deflect it onto the post. Flynn went down the other end and pushed Dublin two clear soon after.

Still Monaghan came. McManus kicked three in a row inside six minutes, one of them their only point from play in the whole of the second half. It meant that with three minutes left, Monaghan led by 0-16 to 1-12. In the end though, Costello and Brogan did the needful.

Dublin got out with the points. Just.

Tommy Walsh knows Kerry will be judged on the summer and nothing else 05:00
Jürgen Klopp believes Jordan Henderson can improve further 22:30
Burnley end 58-year Old Trafford drought to deepen United’s woes 22:21
Steed has the last word as IT Carlow reach their first Sigerson Cup final 22:02
Son pops up late to seal vital three points for Spurs 21:50
Crossword Get access to over 6,000 interactive crosswords