Analysis: Mayo could have won war if they hadn’t lost battle of kick-outs 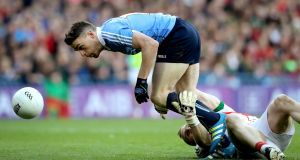 Mayo goalkeeper Robert Hennelly fouls Paddy Andrews to concede a penalty in the second half of the All-Ireland final. Photograph: Ryan Byrne/Inpho

Numbers don’t lie. They just dress the truth up in different clothes. Sometimes those clothes are as revealing as a thong bikini, sometimes they go full burqa. Saturday night was the latter in one crucial category.

The bare figures of the kick-out battle give very little insight into the effect it had on the game. Mayo had 20 kick-outs, Dublin had 21. Mayo lost six, Dublin lost five. Mayo scored 1-3 from moves that started with their own kick-out and conceded 1-2. Dublin scored 0-2 and conceded 0-2. By the numbers, therefore, it all came out pretty much as a wash.

But we know that’s not what happened. We know that those numbers are wrong. Not incorrect – just wrong. Mayo lost the kick-out battle and it wasn’t even close and it mattered. When Stephen Rochford was pondering over the big call to pick Robbie Hennelly ahead of David Clarke, that is the one sentence he didn’t want attached to any report on this replay.

When you change your goalkeeper with the whole country watching, he better be brilliant or he better be irrelevant. You want the player ratings bit to say: “Didn’t have much to do, solid from kick-outs.” What you don’t want is what happened to Hennelly on Saturday.

Drill down into the Mayo numbers and it makes for ugly reading. Hennelly took 13 of the 20 kick-outs, of which Mayo won only seven. The six won by Dublin led to the concession of 1-2 and the loss of Lee Keegan to a black card. After Clarke replaced Hennelly upon his own black card, Mayo won all seven of their own kick-outs over the closing half hour.

Dublin attacked the Mayo kick-out right from the off. Hennelly’s first was aimed at Kevin McLoughlin but Diarmuid Connolly beasted him in the air, although nothing came of it. His second went long to Seamus O’Shea and Brian Fenton did the spoiling this time, sending Ciarán Kilkenny away. Again, it came to nothing but you wouldn’t say it had no effect.

Everywhere, you could see vexed Mayo faces – why had Rochford risked it? Clarke had a five-minute brain freeze at the end of the drawn game but otherwise, he’s had a sound season. He was the All Star goalkeeper-elect. Probably still is.

Hennelly, meanwhile, was dropped in mid-summer after the Galway game, his most obvious sin that day being a calamitous short kick-out that Tom Flynn intercepted for the killer goal. Not alone that, he had a rough day against Dublin in last year’s All-Ireland semi-final replay, where two Dublin goals were scored off moves that started with his kick-outs.

Dublin were always going to try and sack the Mayo kick-out regardless of who was wearing the gloves. But now they could smell chum in the water. Six minutes in, James McCarthy rose above Tom Parsons to punch his third kick-out back towards the Hill. Kevin McManamon slunk onto it out by the Cusack Stand sideline and sniped a point, Dublin’s third.

To Hennelly’s immense credit, he didn’t give up a kick-out for the next half an hour of football. Seven times in a row, he found safe passage – occasionally short to Keegan or Kevin McLoughlin but mostly long to his midfield. Diarmuid O’Connor, Donal Vaughan, Seamus O’Shea all had pinpoint deliveries hit them on the fingertips as Mayo gained ground.

Indeed, it was Hennelly who started the move that led to Keegan’s goal, picking out Vaughan’s run on the Mayo 45. Five passes and 22 seconds later, Keegan found the corner of Stephen Cluxton’s net. Nearing half-time, the Mayo kick-out stats said he’d found his man seven out of 10 times and only conceded a point. The ship had been steadied.

In fact, his numbers were similar to Cluxton’s at that stage. Cluxton had taken nine kick-outs by the 35th minute and found his man six times. Dublin had been blessed not to lose John Small to a black card for a hand-trip on Andy Moran after bobbling one early kick-out; another had gone straight out over the sideline. More pertinently, Dublin had yet to score a point that started with a Cluxton kick-out.

But calamity always has time for Mayo. Hennelly only took three more kick-outs for the rest of the day and Mayo lost all three, two of them to devastating effect. The first one sold Keith Higgins short, allowing Dean Rock to get a flick in and leading to Keegan’s foul on Connolly for the black card.

And soon after half-time, the last act. Mayo’s first kick-out of the second half was aimed long at Patrick Durcan but he was outjumped by Paddy Andrews and, though he didn’t know it yet, Hennelly’s day was about to be done. Dublin recycled and moved through the phases – the rest, we know. The kick, the fumble, the trip, the penalty, the black card. Clarke on, Hennelly in misery.

For the rest of the game, both sides found their men with increasing success. Clarke was spotless off the tee, snapping kicks into tight windows and getting Mayo moving. He went short mostly and his first two kick-outs led to points at the other end.

Cluxton, meanwhile, put on a masterclass in the second half to rival his 2013 final display. He varied between short and long, hitting his man eight out of 10 times, leading to points for Bernard Brogan and Cormac Costello. As Mayo tired, he continually pulled them around the place. And when it was vital that Dublin kept possession in injury-time, he twice hit Kilkenny from distance.

The numbers say he had more or less the same sort of day as the Mayo goalkeepers. Don’t believe a word of it.