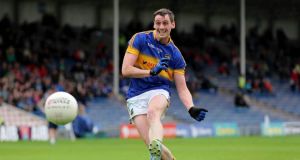 Tipperary ensured progress to the next phase of All-Ireland senior football qualifiers with an emphatic 23-point victory over Louth at Semple Stadium on Saturday.

The Premier County will learn the identity of their round 3B opponents on Monday morning after crushing the Wee County in Thurles.

This was clinical stuff from Tipp but Colin Kelly’s Louth were abject.

Nevertheless, Kelly indicated at full-time that he wishes to finish what he’s started, having completed his first season at the helm.

He said: “I’ve been given a three-year term, why would I think of walking away?”

In Kelly’s defence, it’s been a transitional season with so many former stars, including talismanic midfielder Paddy Keenan, no longer available.

But Louth scored 0-16 in defeat against Westmeath and when they met Tipperary in Division 3 of the Allianz League earlier this year, they managed 3-11.

“It was just an awful performance - there’s not a lot you can say.

“We spoke (at half-time) about clawing back the lead as best we could.

“We scored three goals against them in the second half of the League match in Drogheda.

“But there’s no quick fix to this. It hasn’t happened overnight and it’s not something that will be fixed overnight.”

Louth were ten points down at half-time, 0-6 to 2-10, and managed just a point in the second half.

They went from the 26th to the 67th minutes without a score and when Ryan Burns raised their solitary white flag in the second half, it was met with derisory cheers.

Louth also lost Eoghan Lafferty to a black card and their miserable afternoon was summed up by the scruffy nature of Colin O’Riordan’s 40th minute goal, which slipped through the hands of Craig Lynch.

The Premier County had six different players on target in the opening half, with Ger Mulhair and Conor Sweeney (penalty) bagging goals. Creedon reflected: “Louth weren’t good on the day but we were no world-beaters either. We’ll see who comes out of the hat on Monday now.”