‘We threw everything at it, and just came up a bit short again’ 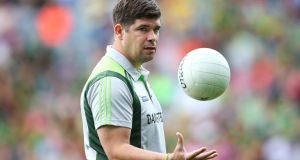 Sometimes the silence can be like thunder. Nothing Éamonn Fitzmaurice could or maybe even should say was about to change the result, other than help us to decide whether this was a game Kerry lost or left behind or maybe even had lifted from them.

So Fitzmaurice started out by saying nothing – at least nothing specific about a couple of late calls which swung closing time in Dublin’s favour, including a near full frontal assault on Peter Crowley by Kevin McManamon, simply let go by referee David Gough.

“Look, I made a decision coming down the corridor, I’m going to bite my lip,” said the Kerry manager, in ways his silence speaking louder than any words. “If I say anything, that becomes our reaction, which isn’t the reaction. The reaction is Dublin are an outstanding team, and I don’t want to be looking at the paper tomorrow or Tuesday and see that Fitzmaurice said this about the ref, or whatever.”

Not even about that potentially match-altering decision, halfway through the five minutes of added time, when a free for Kerry might well have levelled it again, rather than set up Dublin’s confirmation score?

The story of the game doesn’t begin or end there, because Kerry had their chance to put Dublin out of sight – failing to build on a five-point lead at half-time, which given where they’d come from, appeared like a prime match-winning position.

“We threw everything at it, and just came up a bit short again,” said Fitzmaurice.

“I know Dublin won the second half alright, and we had them on the ropes at half -time, but like they’ve done so many times under Jim Gavin’s reign, they righted the ship again in the second half.

“We won the throw-in, it looked to me like David [Moran] was fouled, didn’t get the free, and they went down and got a point straight away It kind of gave them a bit of life and belief straightaway and they kept going. But as I’ve said before you have to give them massive credit, because we had them on the ropes, and they really showed the stuff of champions in the second half.”

Kerry’s life and belief had come off two wonderfully opportune goals in the last five minutes of the first half, turning the strength of Dublin’s kick-outs into their weakness: “We’d rehearsed some of the kick-out scenarios alright,” said Fitzmaurice, “and they came off for us alright.”

Even amid Dublin’s second half onslaught, which Fitzmaurice “knew was coming”, there was no panic. In the end then was it a game Kerry left behind, or were some beaten by a better team?

“Hard to say. Maybe leaning more towards the second, to be honest. But look, we’ll have the winter long now for chewing over it.”

A winter of decisions, too? “Possibly, but today isn’t the time for that. There’ll be a lot of emotion after that effort, but I would encourage everyone to take stock. For me too that’s for another day. I was only hoping to win today, and be back here in three weeks.”

Hatton roars clear in Abu Dhabi as McIlroy’s game deserts him in the dessert 15:31
Manchester City’s Kevin De Bruyne ruled out for up to six weeks 14:33
Angelo Mathews stands up to England attack as Sri Lanka hold firm 15:44
Conor McGregor feels like he’s ‘only starting’ in UFC career 13:02
TG4 to show matches and highlights from AFLW 12:40
Crossword Get access to over 6,000 interactive crosswords