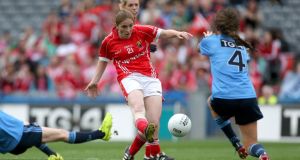 Last year’s All-Ireland women’s final was arguably the game of the summer – but a year on have Dublin learnt their lesson after conceding 2-7 within the final 15 minutes?

As for Cork, this will be a 10th All-Ireland final in 11 years and a crack at five-in-a-row, and a 10th triumph at that, but they too have lessons to learn.

Cork hit 11 first-half wides in that game and had trailed by 0-6 to 2-10 on the 45 minute mark, but as emphatic as their comeback was they’re hardly too keen on leaving themselves in such a position again.

Indeed a year earlier they trailed Dublin by nine points in the quarter-final before a blitz of 1-10 without reply, in the 2011 quarter final too Dublin had led 3-10 to 2-7 with 16 minutes left and again lost, while in the 2014 league decider Cork had also defied a 0-4 second half deficit to go on and win.

If their semi-final victory over Kerry is anything to go by they are performing in a similar hit and miss fashion this year.

Of course when they connect it’s been just as effective, but when not in control of proceedings in any game you always run a higher risk of losing.

For the opening 20 minutes of that last-four tie they managed only 0-2, a fortuitous goal in the 11th minute was only their third score conversion from 13 attempts. Yet in the final six minutes of the half they suddenly came at Kerry hot and heavy scoring 1-3 from six attempts – that’s a point a minute.

In another spell in the second half (with 16 minutes left) they totted up 1-2 within three minutes – again a point a minute. Then in the final six minutes they scored 1-4, all but 0-1 within a three-minute blitz.

So that’s 65 per cent of their overall total amassed in 20 per cent of the in-play game time. They have gotten away with that lack of consistent efficiency in the past against Dublin but it’s still something they will need to work on against a team who will be gunning for them more than ever at the weekend.

Cork are at their most dangerous with ball in hand going directly at the opposition, as are most teams which emerge from the Rebel County. 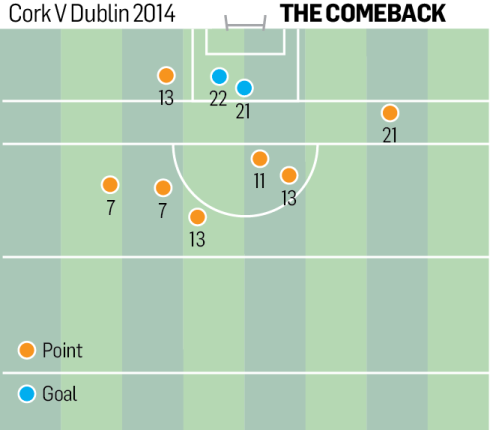 Against Dublin in last year’s final, of the nine scores they managed during their remarkable late comeback, none of those contained a kickpass within the opposition’s 45.

Cork carried the ball into the tackle, and looked to offload hand passes inside – they averaged two handpasses per score.

Such methods though do result in a high error count and force players into crowded areas where shooters are under greater pressure (16 missed scoring chances against Kerry), but it also wears down the opposition.

Dublin will know this better than most – this will be their fourth All-Ireland final in the past decade, one in which they’ve been the number one contender to Cork’s dominance.

Albeit against lesser opponents, Dublin found themselves in somewhat similar circumstances to last year’s final during this summer’s semi-final against Armagh.

Dublin dominated the first half – and remained on top for much of the second, but Armagh scored a goal with eight minutes remaining to reduce the deficit to just six points. The ante was raised and alarm bells were ringing.

Now it wasn’t Cork they were playing but nonetheless Dublin bounced back instantly with a goal of their own and Armagh would not score again.

That kind of response is exactly how they will need to cope with Cork on Sunday, sitting back and inviting the running onslaught will only hold it out for so long.

Experience will have no doubt taught them to push up against Cork, as there’s no better team to exploit the possession and play until the final whistle, regardless of earlier missed chances.

Goals will be another key aspect of the game.

In their last three championship meetings, Cork have raised seven green flags against the Dubs.

In all they’ve scored 42 goals in their 17 All-Ireland series games since their last knockout defeat in 2010.

Dublin will have half the battle won if they can manage to keep a clean sheet.

While on the topic of goals, three were scored in this summer’s two semi-finals directly from intercepted short kickouts – neither goalkeeper can afford any such similar errors on Sunday.

One play, one mistake, could separate these two teams. There was only the one point between them in the two finals they previously met in (2014 and 2009) – but which of them has learnt the most from their contrasting recent pasts?