Failure of Clare hurlers leads to the end of dual dreams 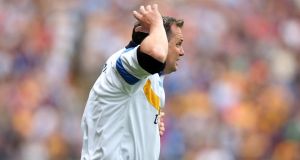 Davy Fitzgerald’s sensitivity to criticism, his agitation at refereeing performances this year and his famous sideline demeanour would suggest a man at his most comfortable when railing against something.

There isn’t a county in Ireland I love more than Co Clare. I have spent many (too many) happy hours in Cullinan’s bar in Ennistymon, and in the countless other bars there, a beautiful place that still surely has the highest pub-to-person ratio in the country. My uncle Mick is a son of that town, and I must be the only Galwayman alive who doesn’t think of Joe McDonagh when I hear “The West’s Awake”, because that’s Mick’s party-piece.

His passion is music, more so than hurling, but he took plenty of joy in last year’s All-Ireland title, which meant I could too. If the come-from- nowhere 2013 win seemed like a kind of dream, however, 2014 has blown some dark clouds into what should be a pretty tranquil landscape.

But the story that broke this week about the decision by the Collins brothers, Podge and Seán, to play football instead of hurling for Clare next year robs last year’s All-Ireland champions of one of their brightest stars for no real reason that I can see.

Their father Colm is the Clare football manager of course, and he was quoted this week as saying: “the hurling management decided that they weren’t going to have any dual players. The decision was made by the senior hurling management, so there were no negotiations. If they’re going to reverse it then that’s their decision too.”

Davy Fitzgerald’s intransigence is part of what makes him who he is. Like Jim McGuinness, he is a man who retired from the intercounty game having served his county with uncommon distinction. Like McGuinness, he managed to get his county to the top of the mountain with almost indecent haste, admittedly with more obvious talent at his disposal but without a core group of experienced players that you would assume must be the backbone of any All-Ireland winning team.

“I am worried because there’s been a lot taken out of the lads,” he said, after Cork had beaten Clare in the Munster championship in June. “There are a few lads that think they can play both codes – you can’t do it.

“I knew something was going to happen today before the game even happened, and if you know that going into a game, sure you’re wasting your time. What are you doing?”

Retaining an All-Ireland title proved to be beyond McGuinness, and many would have said last year that the All-Ireland quarter-final dismantling at the hands of Mayo was inevitable – that the spell can only last so long.

The ferocity of the criticism after that game last year in Donegal was instructive – when you take on your own, as McGuinness had done, you have to keep winning. Stop winning, and you’re suddenly fair game, no matter what trophies you’ve put on the table. The loss last year emboldened people to stand up and challenge him over the fixtures backlog . . . there aren’t too many people complaining now.

Davy was never going to be a man to rest on his laurels – he’s too restless a character for that. And if he’s made a rod for his own back by putting an ultimatum to the Collins brothers over their football commitments, there is also a part of Davy that thrives on that pressure. If the under 21s manage to win the All-Ireland final against Wexford on Saturday, the wriggle-room for failure shrinks again for the senior team.

Retaining the All-Ireland championship with a frighteningly young team was always going to be a huge task, and losing the hero of that triumph, Shane O’Donnell, to a hamstring injury suffered while in training for a Strictly Come Dancing fundraiser would have to count as pretty extraordinary bad luck.

Jim McGuinness knew what he had to do to fight back against local criticisms this year – now Davy has a fair idea too.

1 My favourite sporting moment: Game, set and couch as Borg takes down McEnroe
2 Six Nations rugby needs to be protected for terrestrial TV
3 Garry Ringrose to stay with Leinster as he signs two-year central contract
4 Dr Claire Molloy: ‘It is a privileged place to be, on the frontline’
5 ‘For 25 minutes I ran out of oxygen’: Pepe Reina on his coronavirus battle
Real news has value SUBSCRIBE

Pandemic leaves beleaguered Australian rugby staring into abyss 08:09
Ringrose set for new central deal; memories of Björn Borg at Wimbledon 06:50
Seán Moran: What nostalgia tells us about how the GAA sees itself 06:20
My favourite sporting moment: Game, set and couch as Borg takes down McEnroe 06:29
Dr Claire Molloy: ‘It is a privileged place to be, on the frontline’ 06:21
Here is your handy guide to sport on television this week