Dublin boss Jim Gavin aware midfield could be a minefield 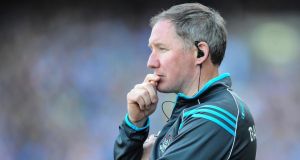 Jim Gavin on Kerry’s midfield: “It’s one of their strengths and nobody’s been able to go after it yet, so it’s a big challenge for us in that department.” Photograph: Tommy Grealy/Inpho

Jim Gavin came before us at the Dublin media night with an apology. He was late due to work commitments. A volunteer, he proceeded to work the rooms on the first floor of Parnell Park. The Sunday Game. Radio. Print. Online. The media were served with stern politeness.

“It’s just another game of football. Our process is ruthlessly going after in terms of what we want to do . . . It’s just kind of business as usual, it’s a game that has a lot of things attached to it but ultimately once the players cross the white line . . . the management team won’t win it for the players, it’s the players that will the game. I think it’s going to be a great contest.”

Gavin seems to predict what he will be asked and memorises his answers. He rarely deviates. Earlier this summer these answers sounded ridiculous and disingenuous when Newstalk’s Colm Parkinson, referencing sources, repeatedly asked the Dublin manager about the assault of Davy Byrne by an Armagh player in a challenge match that led to no suspensions as the managers decided to sort it out among themselves.

Such an instance cropped up again when the opportunity to lavish praise on the Kerry’s midfield was offered to him.

“I thought they were outstanding when they played us in Killarney. The replay game against Cork they certainly won that midfield battle and they’ve won every midfield battle since. [Anthony] Maher and [David] Moran are two colossal players but Bryan Sheehan can easily step in there, [Johnny] Buckley too, they have a lot of players – Donnchadh Walsh too – who can win that primary possession around the midfield area.

“It’s one of their strengths and nobody’s been able to go after it yet, so it’s a big challenge for us in that department.”

Brian Fenton, Denis Bastick and Michael Darragh Macauley can answer this challenge with actions on Sunday.

Discipline is raised. There is some sympathy for Dublin here; they do on occasion seem victims of their own strength in the tackle.

“Discipline would be a part of the team’s culture, it would be part of the culture of any of the teams that I’ve been involved in,” said Gavin. “The players don’t need me to remind them what’s expected of them when they wear that county jersey. [Mayo] was a physical game, both teams went hard at it and some players stepped over the line and mistakes were made.

“I think both teams took that on board, I thought both teams were very mature in terms of how they approached the replay, both teams went hard at it despite what was being said externally about what the game was going to be like.

“I thought both management teams and players approached the game the right way. I think it was a cracking game of football and we realise we were lucky to get out of there and we’re fortunate to be in an All-Ireland final but we’re just happy to be there.”

The Diarmuid Connolly sending off, suspension, hearing, appeal and eventual quashing of the suspension hours before the Mayo replay is broached. The question is whether Gavin thinks the system is working.

“I think the disciplinary process that the GAA have set up is there for the association and its members and is there to ensure that members get due process. That’s the process that we took. I think it’s fit for purpose. We’ve got over that particular issue now and we’re just looking forward to an All-Ireland final.”

Was Connolly’s performance in the Mayo replay a result of the prolonged appeals process? “When we approached that week of preparation for the game, as we always do, we looked at how we wanted to play our game.

“It doesn’t matter what players are at our disposal, it’s just that players have to be adaptable to move in and out because it has become a 20-man game, it’s being able to stick with that gameplan, that process, for the full duration, so whether a player was available or not, was inconsequential in some regards.

“For the player personally, having been by his side, he managed it very well, he’s a very mature man now and took a very balanced approach to it.

“On a personal level, when he became available, I was just very happy for him.”

Why was he cleared? “The DRA have yet to publish their written findings so I’m not going to comment until that comes out.”

You were given a shortened explanation on the night? “We were yeah but, as I said, I don’t want to get into that at the moment. The focus for me now is . . . that’s behind me, for the team now our focus is on this Kerry challenge.”

Just another game of football.