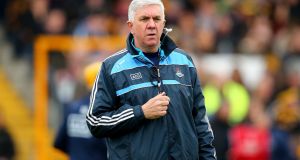 Dublin manager Ger Cunningham: will be aiming to lead his charges to victory over Limerick at Parnell Park on Saturday. Photograph: Cathal Noonan/Inpho

When Daire Plunkett talked about getting rid of that “which Dublin will show up this week?” question, he could have been talking about any weekend in the Allianz Hurling League.

Lethargic against Tipperary, on fire against Cork, and a bit of both against Kilkenny in the last round, they have, not for the first time in recent league campaigns, been a model of relative inconsistency.

Now comes Saturday evening’s quarter-final against Limerick at Parnell Park, and the chance to level that consistency gauge a little more.

Dublin beat Limerick in the same fixture (at Croke Park) a year ago and also beat them in the championship, and yet for players like Plunkett the performance really is as important as the result.

“The last three or four weeks, any of the reports from our games have talked about our work rate and our use of the ball, and that’s what we really needed to get back to. When we have that work rate, we’re a very, very good team. But when we don’t have it and when we’re not bringing it, and we didn’t bring it against Tipperary, that was one of the most disappointing things, having had a very positive start to the year with the Walsh Cup. To fall so flat, it was very disappointing . . .

“But since then we’ve been able to get back to it and it kind of proves that point to ourselves . . . when we have that work rate and use the ball well, we’re a very, very good team.

“When you can say that you’ve beaten Galway, Cork and Waterford in three games in four weeks, it gives you a lot of confidence that what we’re doing is right and we should trust that process and keep going with it.”

Limerick lost their crucial last game in Division 1B to Clare but won all four of their previous games. They have the successful Na Piarsaigh club players back on board.

Tipperary will be without Patrick “Bonner” Maher for their quarter-final with Clare in Ennis, the Lorrha-Dorrha forward ruled out with a knee injury. Corner back Michael Cahill is also out with a hamstring injury but forward Jason Forde is set to feature for the first time since the opening day victory over Dublin, when he hit 1-5.

Clare manager Davy Fitzgerald will be without forward Podge Collins as he is set to feature for the footballers instead, in their Allianz Football League Division 3 clash with Kildare. A victory for the footballers would ensure promotion. Collins featured the last day against Longford.

He also featured for the hurlers recently, coming off the bench against Kerry and then Limerick, but the football will be the focus this weekend. Even though Kildare are already promoted, there is a lot riding on the game for Clare.