Cillian Buckley following in the footsteps of Kilkenny legends

Defender claiming the mantle left by the likes of JJ Delaney, Tommy Walsh and Brian Hogan 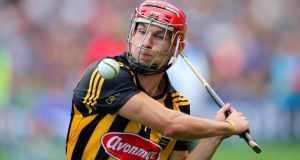 Cillian Buckley: “It’s turning into a fierce game of athleticism and fitness. It’s probably suiting me, and it is a place I enjoy playing.” Photo: Cathal Noonan/Inpho

It’s now 31 days and so many hours since Kilkenny collected their 70th Leinster hurling title without much fuss, and it would appear that several positions are up for grabs again for Sunday’s All-Ireland semi-final against Waterford. With at least one exception: the number seven shirt.

With Jackie Tyrrell definitely ruled out, Michael Fennelly a considerable doubt, and Richie Power still a long-term absentee, manager Brian Cody could be considering several changes from the side which started the 10-point win over Galway in the Leinster final.

Yet if there is such a thing as a definite starter for Kilkenny this season then it’s left wing back Cillian Buckley, and for a good reason. The Kilkenny defence took the brunt of the high-profile retirements last year (JJ Delaney, Brian Hogan, Tommy Walsh, etc), and in the meantime, Buckley has become one of their defensive pillars.

Yet Buckley, like many Kilkenny players, wouldn’t necessarily consider that his first or even best position: he describes himself almost as a “recast” half-back, having first emerged on the Kilkenny county scene as one of their most exciting midfield prospects.

“I think then I made the transition to midfield with county set-ups. But the way things are gone now, half-back, midfield, and half-forward is a real battle zone. You’re wearing the number on the back, but there is not much difference between the three lines. It’s turning into a fierce game of athleticism and fitness. It’s probably suiting me, and it is a place I enjoy playing.”

Yet it also brings responsibility, given the iconic status of so many of the players that held that position in recent years. It’s still early days, although Buckley, with the likes of Pádraig Walsh (number five) and Kieran Joyce (number six) are already looking every bit as comfortable in their positions.

“When you think that Tommy Walsh, Brian Hogan, and JJ made up that line, I don’t think there was anyone else needed.

“It was certainly hard to get a knock in there. But the last few years, since the boys left, Kieran Joyce was knocking on the door for a long time. Kieran had won an All-Ireland under-21 playing in that position.

“With Pádraig Walsh, you’re not getting anything too unlike Tommy. It’s nearly a replica in a way. So things have fitted in there nicely. You get a chance to learn from the likes of Tommy and JJ and you try and reproduce a bit of it if you’re playing half-back. If we were half as successful as the boys we’d be happy to get some success there.

“There are players coming there behind us, trying to knock us out, and that’s what makes the thing so successful.”

Buckley has also taken on a greater leadership in the Kilkenny team this year, again partly due to necessity.

He points to the likes of Richie Hogan and TJ Reid for taking over the leadership roles in the attack, and it’s up to everyone else to follow suit.

“Things move on, and now they have become the main players. And there’s no doubt they are the leaders, they are absolutely vital in our set-up. They took on the challenge of being out in front and taking up the gauntlet, learned from the lads who have gone before them, and hopefully we can learn a bit from them too.”

As for his own breakthrough moment, Buckley points back to the 2012 All-Ireland final replay against Galway, when – despite not featuring at all in the drawn game – he started the replay at midfield, scoring a point in what proved to be another one of those master strokes of Cody.

“Yeah, although Walter “Wally” Walsh was the main man that day,” recalls Buckley.

“I managed to get in, even though I hadn’t played in the drawn game. So to be involved was a real dream come true.”

“You never feel you are far away, but there is a fierce sense of disappointment, when you are not picked, like that first day.

“But I really learned from it. And there is a huge change now, between my first year on the panel. You do definitely feel more comfortable.”

At least as comfortable as it gets on a Kilkenny team.