Ciarán Kilkenny back stronger than before after cruciate injury 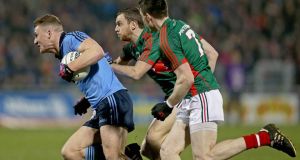 Ciaran Kilkenny of Dublin in action against Keith Higgins and Patrick Durcan of Mayo in the Allianz Football League. Photograph: Donall Farmer/Inpho.

The way Ciarán Kilkenny talks about tearing his cruciate ligament it sounds more like a blessing than an actual curse, although that’s not saying he doesn’t utterly sympathise with his Dublin team-mate Eoghan O’Gara.

News that O’Gara will now miss the rest of Dublin’s season, after tearing his cruciate in a club match last Sunday, came almost exactly one year after Kilkenny endured a similar fate – his injury sustained in Dublin’s football league game against Kildare.

There are some subtle differences – O’Gara is now 29, while Kilkenny was still only 20 – although there is no reason O’Gara can’t make a complete comeback within the year, exactly like Kilkenny has now done. (There was a further blow for the O’Gara family, however, as younger brother Killian broke his ankle in the same game on Sunday, ruling him out of Dublin’s under-21 campaign).

“It’s tough on the family alright,” says Kilkenny, “and I’m devastated for Eoghan, personally. But these things happen in sport. I wouldn’t wish that injury on anyone, but you look at the likes of (Cork’s) Colm O’Neill. He has come back from it three times. And if Eoghan puts the work in he’ll be back, better than ever.”

Kilkenny was quite philosophical about his injury at the time, and although the rehab was hard at times, it helped that another Dublin footballer, Kevin O’Brien, was sharing the comeback from the same injury. Also, says Kilkenny, the time out afforded him the chance to get a different perspective on sport and indeed life.

“I’d been playing so much, football and hurling, with so many different teams, it was good to get a break, and it does make you appreciate it a lot more. You really are in a privileged position to be playing for your county, and although you’d even miss being around the dressing-room – the small little things – I learned a lot from it.

“I helped out with a few teams in the college (St Pat’s Drumcondra), and got to develop different aspects of my life as well. I got to go to Zambia, with a charity, and that gives you a good perspective on life, how little they have over there, and how privileged we are over here.”

Kilkenny reckons he’s played 10 games since returning to full training in December, and “touch wood” there are no lingering effects of the injury: “Naturally enough, the first few games, it’s in the back of your head, but I don’t even think about it any more.

“And since I got injured, the gym work has been pivotal in helping to strengthen the quads, the hamstrings, all around there, and try to manage the body and the workload. Myself and Kevin did testing before we got injured, and when we came back, some of the scores were a lot better. You’re in the gym for four or five months so you get to specify a lot of parts of your body so you do come back stronger.

“And when you’re playing football, you think you are invincible and then you get an injury, and you suddenly realise these things can happen. It makes you think about other aspects of your life, college work, family. You become a better person because of it. Obviously I was devastated that I got it but it was a good opportunity to learn other things about yourself and thank God I’m back fully fit, and can keep that clean bill of health.

“It’s 50/50, mental and physical, trying to come back, and you do have a lot of hurdles to get over. But I feel now if lads can get through a cruciate injury they can get through a lot of things in life” said Kilkenny. Another cruciate victim from last weekend is Offaly footballer and Rhode captain Paraic Sullivan, which means he too will miss the remainder of 2015.

Ciarán Kilkenny was speaking in Dublin at the launch of the AIG XLNTdriver App, which rewards safe drivers by reducing their car insurance premiums.