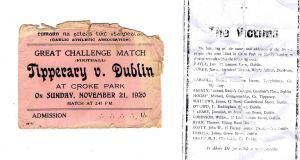 A ticket from the Tipperary versus Dublin match at Croke Park on Bloody Sunday. 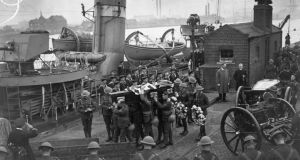 The bodies of British officers killed in Dublin on the morning of Bloody Sunday being taken back to England for burial on 25th November 1920. Photograph: Getty Images. 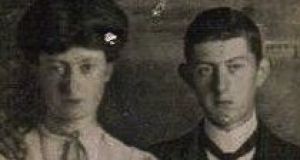 Daniel Carroll, who was shot by British soldiers on Bloody Sunday, with his sister May.

Daniel Carroll was 31 years old when he was shot in the thigh walking away from Croke Park on Sunday, November 21st, 1920.

The bullet came from a passing lorry of soldiers, part of the convoy hurtling down Jones’s Road in the hours after an IRA dawn operation killed 14 people, including nine British Army officers. He died two days later in Jervis Street Hospital, the shock and extensive bleeding claiming him at 10am on Tuesday morning. He was the 13th victim of the Croke Park attacks, the second-last one to die.

Growing up, Stephen Brennan occasionally heard tell of the “Carroll Curse”. It was a sort of bleak family fable handed down through the generations, a legend half-believed and half-dismissed, according to mood. It involved one side of the family falling out with the other – over what, nobody was entirely sure. But the upshot told of a curse that decreed a Carroll family member would die young in every generation for seven generations.

“Spookily, it kind of happened to some extent,” says Brennan. “Dan was the last. But his father died when he was six years old. He fell and hit his head off the hearthstone while reaching for his fiddle over the fire. So the story goes anyway.

“He had a brother called Hugh who died when he was 21. Then there was another relation, a woman who was shot in her bed and buried in the back field for days before people started asking questions. But yeah, Dan was the last.”

Dan was the youngest of four siblings, of whom his brother Joe was the only one to have a child. Joe’s daughter Daphne grew up to be the well-known actress Daphne Brennan and she and her husband Denis reared the Brennan acting dynasty.

“Dan died before my mother was born,” says Stephen. “She died last year at the age of 91. So she didn’t know him at all and we’ve only ever had hearsay to go on really. I never paid it that much attention as a kid, you know the way you don’t really care about history or whatever.

“But when I got older, I was aware of his name being up on the thing in Croke Park as one of the 14 killed on Bloody Sunday. And my mother always said that her father, my grandfather Joe, referred to him as his favourite brother. He sounds like he was just a real simple, quiet gentleman. He wouldn’t say boo to a goose.”

This afternoon at Glasnevin Cemetery, 96 years almost to the day after his death, a headstone will be unveiled at Daniel Carroll’s grave. Brennan will be there with assorted relatives and interested parties, seeing off a Tipperary bar manager who none of them ever knew and who was buried quietly and out of the way in the harum-scarum days that followed Bloody Sunday.

Of the 14 people who were killed at Croke Park that day, eight were buried in graves that remained unmarked up until very recently. The Bloody Sunday Graves Project is an initiative that aims to have headstones for all 14 by the time the centenary comes around in 2020. Jane Boyle’s headstone was unveiled on this weekend last year, that of James Matthews in August. After Carroll, five remain.

The project is a joint effort between the GAA, Glasnevin Cemetery and Sunday Times journalist Michael Foley, whose 2014 book The Bloodied Field was the starting point. During the writing of the book, Foley attempted to find the families of all the victims – with varying degrees of success. The fact that over half of them were in unmarked graves wasn’t all that surprising, given events in 1920s Ireland.

“At the time, the families would have just wanted to keep the heads down and not draw any attention on themselves from the authorities,” says Foley. “It was ordered that the funerals were to have no shows of strength, no flags, no banners, nothing like that. Everything was to be very low-key, just put them in the ground and go home.

“And a lot of the funerals were in Glasnevin on the day that the dead British agents were being taken in gun carriages down the Liffey to Dublin Port, to be taken home to London lie in state. The civilian victims were to be buried with no fanfare, no nothing.

“So what happened in a lot of the cases was that families just kept their heads down and let the dust settle. And then the War of Independence bled into the Civil War and time moved on and things were put to the back burner and eventually forgotten about.

“As well as that, financial reasons would have been a big thing in some cases. Michael Feery, for instance, is in a common grave with about 20 other people. The money wouldn’t have been there to do it in a lot of cases.”

Daniel Carroll worked in Kennedy’s pub in Drumcondra. He was unmarried and lived with his employer Martin Kennedy near Merrion Square. His sister May lived near the top of Clonliffe Road and Daniel supported her from his salary of £120-a-year. He visited her regularly either on his way to work or after a hurling or football match in Croke Park.

His brother Joe was the family dare devil. He had fought in the first World War, first in the trenches and later in the skies.

“He was in the Battle of Messin and the Battle of Flanders,” Brennan says of his grandfather. “And then he came back and joined the Flying Corps, the madman. He had a better chance of survival in the trenches. He was a rear gunner who shot his own tail fin off at one stage.

“They were known as Flaming Coffins, these planes. If you crashed one of those, the chances of it not bursting into flames was very remote. He did crash and it didn’t blow up, amazingly. They were behind French lines.

“And there’s a picture of him standing beside the wreckage of the plane with the caption saying: ‘Retrieving guns and ammo after petrol tank pierced and controls blown out.’ All he did was break his nose and have couple of teeth knocked out. And then stood to pose for a photo.

“He got to the end of the war, survived everything. Even survived Spanish Flu, which killed off more people than the plague. And then he got back home to find his brother shot dead at a football match. Imagine coming back from the horrors of that war, believing you’d die every minute and your country is in complete upheaval. I would say it was only the fact that he had a weak heart that stopped him joining the IRA after Dan was killed.”

On that Sunday, Daniel Carroll was supposed to be on a day off. Bar workers were entitled to every fourth Sunday off work but he went in and opened up as a favour. With Tipperary playing Dublin in Croke Park, he reckoned it would be a sin to have his native county playing just down the road and not go along.

In the chaos of raining bullets, Carroll left Croke Park and headed for the city. He had crossed the bridge onto Russell Street when the bullet pierced his thigh, lacerating the muscle and severing the blood vessels. The bullet fractured his thigh bone and some of it was left embedded.

“Even on the day, people were afraid to call an ambulance to help the injured,” says Brennan. “People were being dragged into houses and taken down back lanes before an ambulance was called because they didn’t want to attract attention from thugs running around with guns. They were all terrified.

“It just took a guy to jump out of a truck that day and shout ‘ambush’ and soon you had guys shooting kids out of trees. It was a nightmare. Everyone was living in fear. The last thing anyone would have been thinking of in the aftermath was headstones for the graves.”

Initially, it looked as though Carroll would merely be grievously injured rather than in fear for his life. Martin Kennedy visited him in hospital on the Monday and he was lying with his leg bandaged all the way up to his waist having been operated on the night before. “Wasn’t it misfortunate that I went?” he said to his boss.

The Kennedys left him and went home, only to find out the following day that he had died in the morning after a tortuous night of pain. “He was the most inoffensive man I ever knew,” said Martin Kennedy. He was buried on the Thursday in Glasnevin. Today, he gets a headstone.

“The family are all 100 per cent behind the idea,” says Brennan. “And because my mother died last year, it was a nice thing to do in honour of her memory. It made total sense.

“I just think it’s a wonderful thing for the GAA to do. The whole sentiment behind it is fantastic. The first time I met Cian Murphy in the GAA, I said: ‘God, thanks a million, this is a great thing you’re doing.’ And he said: ‘No, no. These people were our patrons. They went to a football match and didn’t come home. It’s only right that they are remembered.’”