Deputy Walsh has national question on his agenda 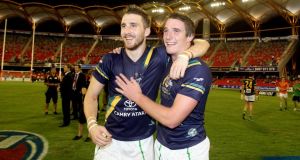 At the age of 23 Aidan Walsh has already had an extraordinarily eventful career. In his second season three years ago he helped Cork to the county’s first All-Ireland in 20 years, won an All Star and was selected as Young Footballer of the Year.

A year later, having along the way put in a dazzling performance for the county’s under-21 hurlers in the epic Munster final against Limerick that summer, he was chosen to travel with Ireland to Australia for the most recent International Rules series for which his exceptional fielding ability and perpetual motion made him an obvious fit.

This evening he takes the field for the first Test of this year’s series, as vice-captain of the team. Even this week has been noteworthy. Cork have acquired a new football manager in Brian Cuthbert and lost to retirement the long serving Noel O’Leary.

Oh, and that’s not to forget the tangles of the club-country interface, which has created havoc for Ireland manager Paul Earley.

It’s more of an indication of those pressures than an eerie coincidence that Walsh and his two DCU house-mates in Dublin, Ireland and Donegal captain Michael Murphy and Dublin’s twice All-Ireland winner Paul Flynn, are all compromised by club activity this weekend, or at least were until the Cork County Board moved the intermediate hurling final between Kanturk and Éire Óg.

Walsh sees the problem as symptomatic of the declining status of the internationals but equally has sympathy for club players caught in the crossfire.

Competition
“I suppose the competition has lost a lot of its recognition compared to years ago but it’s hard for the other club players who have to stop for the whole summer because of inter-county. Then all of a sudden the International Rules comes along and they have to stop again.

“It’s a juggling act. You could be lucky and the games mightn’t fall on top of the Tests but this year it’s been fairly hectic with fellas playing championship and games falling on top of the Tests. I suppose it’s just part and parcel of the whole competition really. It would be nice if the fellas that are involved were able to play for their country and the games got put back but it’s hard to please everybody.”

His elevation to the vice captaincy is a reflection of Walsh’s status in the game as well as his importance in the Ireland game plan. He says the honour was unexpected.

“I wasn’t expecting it at all considering the older fellas on the panel and have played many more Tests than I have. I’m just delighted that he thinks I’m good enough for that accolade. It’s no extra pressure. It’s just being more vocal and a small bit more of a leader.

“Two years ago was my first time there. I was just 20 or 21 at the time and it was a great experience for me and my first time being involved in a professional set-up. I was kind of in awe of fellas I’d looked up to who were on the panel and I just wanted to learn off them.”

Rumours
Back at home Walsh’s inter-county career faces some fundamental decisions in the weeks ahead. Rumours that he was in training with and under consideration for a place in Jimmy Barry-Murphy’s hurling panel surfaced before last month’s All-Ireland replay.

He bluntly dismisses this as “lies” but says that he will make up his mind shortly on whether to pursue a dual career at inter-county level next season. He is familiar with new manager Brian Cuthbert, who was a selector with Conor Counihan last season.

“It will be interesting in the next few days,” he says, “to see who he brings in with him.”

He hasn’t had time to give much consideration to the subject of inter-county hurling.

“I haven’t thought about it because there’s so much going on between the International Rules and the club so I’ll wait and see and have a talk with Cuthbert and see what his plans are and I’ll make my decision in a few weeks and see what happens.”

In the immediate term with his club issue resolved, he looks forward to seeing how he and the Ireland team match up to professional opponents.

“It’s a challenge and you relish it. We’ve looked through their players and they’ve some massive players, some of the best players in the AFL.

“You wouldn’t like it any other way. Two years ago it was kind of disappointing the way Australia didn’t pick their best team. They’d a poor enough team and that downgraded the competition a bit more so it’s good to see Australia picking a good, strong panel.

1 Gary Neville in Qatar an exercise in semi-journalism
2 Owen Doyle: Creeping professionalism of schools rugby a threat to the game
3 Investment in our Olympic hopefuls may be costly – but it’s worth it
4 NFL Division One: Malachy Clerkin’s team-by-team guide
5 Matt Williams: Expect the unexpected in rugby’s greatest tournament
Real news has value SUBSCRIBE
Here is your handy guide to sport on television this week