Denise O’Sullivan : ‘When I told him about Houston Dash he was over the moon’ 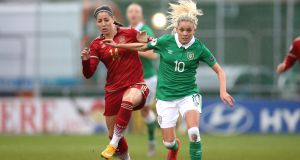 “My Dad passed away on Sunday, I signed for Houston Dash on Thursday and then went to the awards on Sunday and won International Player of the Year. My emotions were all over the place.”

Life motors along at a fair old clip when it wants to and sometimes it takes everything we have just to grab a strap and hang on. In the space of five days last week, Denise O’Sullivan buried her father, completed the pivotal transfer of her career to America and took home Women’s International Player of the Year at the FAI awards. Any one of them would have made it a hell of a week. All three together? Buckle up.

John O’Sullivan was 63 when he died in the Mercy University hospital in Cork, just five weeks after being diagnosed with cancer. He left behind a family of five boys and five girls, the youngest of whom is 22-year-old Denise, a busy schemer at the heart of the Ireland midfield for 48 caps now. By this time next week, she’ll be in Houston meeting up with her new teammates, her head still spinning a little, understandably enough.

“My Dad passed away on Sunday, I signed for Houston Dash on Thursday and then went to the awards on Sunday and won International Player of the Year,” she says. “My emotions were all over the place. For it to all happen in that short a time, it was a weird week to be honest.”

She was still in Glasgow when he was diagnosed in early February. Having signed for Glasgow City as a teenager in 2013, O’Sullivan was part of a glorious spell of success for the Scottish club, picking up eight trophies in three seasons and scoring 33 goals in 65 appearances. Her father was her greatest supporter and took huge delight in her progress.

“When I was in Glasgow, my dad would have rung me every single day to see how I was. Then one day he texted to say he was going into hospital and to ring him if I needed anything. I didn’t really know how sick he was – they weren’t telling me much because they didn’t want to distract me.

“But then once they got the results and found that he had cancer, they obviously told me then. He went into hospital five weeks ago and found out he had cancer and after that he didn’t have much of a chance. It happened very quickly.”

So quickly, in fact, that she had to rush home for his last days. Sue Ronan’s Ireland side played in the Cyprus Cup in the first week of March and it was in the airport in London on the way home that the call came from her family. She landed back in Cork and went straight to his bedside. She slept in the hospital on Thursday night and again on Friday. They lost him overnight on the Saturday.

“It’s definitely a weird feeling to have just at the minute. Like, since the start of the year, even if all that had happened was that I got the news about Houston, that would have been enough. But to get that and then find out about my dad being sick first of all and then for him to go so quick in the week that was in it. Everything happened at once.

“He would have been absolutely thrilled. When I told him about Houston Dash, he was over the moon for it. He was calling me every day for updates on the contract situation and looking to find out if anything had happened. To be honest, I was kind of doing his head in before he died because I was starting to get stressed out over whether it would happen or not and what the contract would be like. But really, he loved all that stuff. It’s all happened at a weird time but hopefully it will work out good in the end.”

The club she’s joining finished one spot off the play-offs in the nine-team National Women’s Soccer League (NWSL) last year. O’Sullivan has been signed primarily as cover initially, since the Dash will lose World Player of the Year Carli Lloyd as well as USA’s Morgan Brian and Brazilian Andressa from their midfield during the season due to the Olympics. She starts off in a pre-season tournament in Portland the week after next. Time to start making an impression.

“It’s a huge move, to be honest. I’d been in Glasgow for two and a half years and I had told them that I thought I was ready to move on. I said that to them around Christmas time before I went home. But I was under contract so nothing could happen, even though they said that if someone wanted to buy it out, then they’d be fine with it. I thought nothing of it and I presumed nothing would happen.

“But when we played the USA with Ireland in January, that seemed to change things. It’s funny, we were on the bus one day in the USA and I was sitting beside Savannah McCarthy and I was saying how much I would love to play in America sometime. That would be the dream, totally. And then a week later, Houston came in for me. So I’m delighted. It’s a massive move and a really big step into the unknown but I’m looking forward to it.

“It’s one of the biggest leagues in the world. The standard is so high and there’s really top teams over there. The players are athletes so it will be great to live as a full-time pro, to train every day and improve. I just want to be a professional environment. It’s going to be really tough but I’m willing to work really hard and try to get into the starting 11. That’s my aim.”