‘Crazy honey with a gun’ shows the extreme realms of fandom 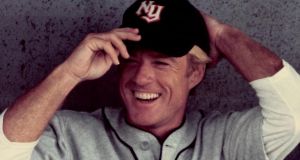 The new baseball season will officially open across America next week with the usual fanfare and hyper-speculation but one of the stranger and half-forgotten incidents in the rich history of the national pastime has only just run its course.

Since its release in 1984, The Natural has become one of the most revered of all sports films, featuring a still-dazzling Robert Redford playing Roy Hobbs, the dauntless country kid who shapes a baseball bat from the wood of a tree struck by lightning on the family farm before chasing glory in the major leagues. It presaged a series of films which would help to mythologise baseball, with the unabashedly sentimental Field of Dreams becoming a huge hit five years later.

The pivotal sequence in The Natural takes place relatively early and is jarring in its unlikely violence: Hobbs is invited to a hotel room by a young woman who shoots him in the stomach as soon as he enters. It was one of the few scenes faithfully adapted from Bernard Malamud’s 1952 novel of the same name, which sets Hobbs’ startling ability against a much darker and troubling canvas. In the book, the shooting scene is as vivid as it is unexpected but was easily accepted by readers as it mirrored a similar encounter which had occurred in Chicago three years before Malamud wrote his book.

In 1949, Eddie Waitkus, a player with the Philadelphia Phillies was in his room at the Edgewater Beach Hotel in Chicago for a game against his former club, the Cubs. A note was delivered to his room by hotel staff. It was written by a young woman who called herself Ruth Ann Burns and consisted of an urgent but respectful request that he visit her. He phoned her room and agreed to visit, walked in, sat on a chair whereupon his host produced a shotgun stored in the wardrobe.

In the subsequent court case it was heard that the woman, who was actually Ruth Ann Steinhagen, told her guest: “For two years, you’ve been bothering me and now you are going to die.”

Immediately after shooting Waitkus, the young woman phoned for help. It became the defining story of that year’s baseball season. There is a common misconception that fame was an easier cross to bear half a century ago but the sensationalising of the lives of film stars and athletes was probably as intense in the 1950s as it is today.

Steinhagen was charged with attempted murder but a psychiatric report deemed her insane during her meeting with Waitkus. It turned out that she had been bereft after he was traded from the Cubs, having become fixated with him. She had been in regular attendance when he played for the Cubs, often waiting to watch him emerging from the clubhouse. “I just became nuttier and nuttier about the guy,” she would admit after the crime.

Waitkus survived the shooting. He had come through three years fighting in the Philippines during second World War unscathed but the incident left him sidelined for the remainder of a season in which he had been having a fabulous run of form. But Waitkus was old-school chivalrous, proving himself more than worthy of Ms Steinhagen’s adulation, refusing to press charges and preferring to see them both as a victim of fantasy. The woman spent three years in a psychiatric hospital before being released.

Waitkus spent the year convalescing and his recovery was difficult, requiring several operations. He played major league baseball for a further six seasons, losing the World Series with the Phillies against the Yankees in 1950. But it was felt that his game never soared in the way it had done during that interrupted season and he was bothered by the physical effects of the shooting for the remainder of his life. And he never again crossed paths with his assailant after their brief and violent encounter in the Chicago hotel.

The incident would probably have faded from memory had it not been placed by Malamud in the opening scenes of his book and for the fact that it was a perfect case study into the more extreme realms of fandom and of the potential risks faced by people who are elevated to stardom. Three decades later, John Lennon would encounter a similarly deranged stranger with the most tragic result.

Elite sport has changed beyond recognition since Eddie Waitkus wore a Phillies uniform and access to contemporary stars is heavily vetted and controlled. Players move from gated houses to security-guarded players’ areas in stadiums to VIP rooms in restaurants and clubs and airports and holiday facilities: they exist, for the most part, in a parallel world to the hundreds of thousands of people who follow their every move and watch their facial expressions in the slow-motion replays and who are often thrilled and moved beyond rationality by watching their heroes run, shoot, hit, catch . . . all the childhood basics at which they preternaturally excel.

The monetary compensations are lavish, of course, but you only have to see any famous athlete or music star in a public place to gauge the intense scrutiny under which they exist through those lightning quick few years when they are the best at what they do. Sports stars have never been under as much scrutiny and observation and few sports excite as much debate as baseball. Although it is unlikely that many of today’s players were familiar with the Eddie Waitkus story, there is a good chance that they have all had fleeting worries about an encounter with a disturbed fan or, as Waitkus described his assailant, the “crazy honey with a gun”.

After her brief dance with infamy, Ruth Ann Steinhagen disappeared into regular life in Chicago and lived until late last year. It took a full three months before the Chicago Tribune reported her death and they had only discovered it by chance when researching another case.

The Tribune published an obituary and last week the New York Times followed suit, complete with photographs of the trial, which looks like a still from To Kill A Mockingbird , and a portrait of Eddie Waitkus wearing a Cubs uniform, his cap tilted and his gaze straight-on.