Gaelic games may become just another sport, simply another product to be consumed 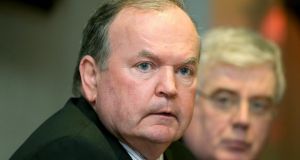 GAA president Liam O’Neill: Asked why after 30 years of service would he suddenly decide to oversee a deal which he knew would damage its future? Photograph: Cathal Noonan/Inpho

During this week’s anguished debate about Sky television and the soul of the GAA, two people kept coming to mind: the late writer and broadcaster Breandán Ó hEithir and the late rap artist Notorious BIG.

In the afterword to his much loved book Over the Bar , Ó hEithir offers his interpretation of what the GAA is really about and tells the story of Bill Doonan, a restless Cavan man who literally broke for the border in 1943, joined the British army and quickly found himself serving as a radio operator in southern Italy. On a certain Sunday in September, the Irish man vanished and his unit, fearing the worst, quickly mounted a search. His mates found him in the rarest of places.

“He was up a tree on the side of a steep hill and appeared to be in a trance,” wrote Ó hEithir. “And in a way he was, for after much effort and experimentation, Private Doonan had eventually homed in on the commentary of the second half of the All-Ireland final between Roscommon and Cavan in Croke Park. He was too indispensible to be court-martialled and survived the war to play soccer for a year with Lincoln City and afterwards win two All-Irelands with Cavan; one in the Polo Grounds, New York in 1947 an another in Croke Park the following year. If anyone ever asks you what the GAA is all about, just think of Bill Doonan, the wanderer, on the side of that hill, in the middle of a World War . . . at home.”

The spirit of Doonan was at the heart of the debate between the pro- and anti- Sky factions. Nobody should doubt the integrity of GAA director general Páraic Duffy or president Liam O’Neill on this matter. As O’Neill asked, why after 30 years of GAA service would he suddenly decide to oversee a deal which he knew would damage its future?


Siege mentality
The GAA delivered its message that this was a good week for the association,

but for all that there was an unmistakable sense that they were never fully at ease with themselves or with their decision to make a deal with Sky. Liam O’Neill’s anger with RTÉ, particularly at the tone and insistent questioning during the Prime Time debate was reminiscent of the siege mentality that the GAA adopted in the years when they were required to defend rules 21 and 42. The irony is that this time, they were being hammered not for digging their heels in but for orchestrating a move described as “progressive”.

The Sky decision has many champions, including many contemporary GAA stars who are understandably excited at the idea of playing to a (potentially) global rather than national television audience. That, too, is understandable.

But the Sky deal isn’t so much about the money involved or the plight of the mythical bachelor in his cottage with turf neatly stacked for whom satellite television is a foreign language (he will simply do what he did through from the 1950s through the 1990s – like Bill Doonan, he will turn on the wireless). It isn’t really about the bells and whistles of the Sky presentation either: their programme will undoubtedly be polished and fine but RTÉ still hold the ace in the pack with M Lyster, the Big Smooth of sports presentation.

No, the Sky deal has forced the GAA to look in the mirror and ask itself what it wants the association and its games to become in the decades ahead.

There has been a lot of vague talk about transforming Gaelic games into global sports like football or basketball. It is a bold vision and all but impossible to imagine. If people in many parts of Ireland cannot be persuaded to play hurling after a century of exposure to the game, why would they suddenly take it up in Marseille or Mozambique?

In response, the association can point to GAA clubs splashed across the globe. And there is something brilliant about the idea of Irish expatriates playing the games in Asia or the Americas. But these clubs were set up by Irish people as a means of preserving some sense of Irishness and they thrive much as Irish dancing thrives in pockets of cities across the world.

Those in charge of the GAA now can say that they will not be interested in granting more games to Sky and less to free-to-air RTÉ in three years’ time. But they can’t say with any certainty what the GAA president in 10 years’ time will feel is right for the association.

Let’s imagine that clubs flourish and bring in members and crowds in cities across Europe and a league is dreamed up and that Sky TV is a big player in this. Let’s imagine the wildest progression possible: that in decades to come, the association has a profile something similar to the NBA. What then? Does the GAA want that to happen? Can the games possibly remain amateur? Will the All-Ireland matter as much? Will it still exist in the same form?


Jamaican immigrants
In 1984, when Breandán Ó hEithir published Over the Bar and the GAA was celebrating its centenary and still believed that

TV presented a threat to its welfare, a12-year-old named Christopher Wallace was growing up in Brooklyn, the son of Jamaican immigrants with a talent for English and music which found expression in rap performances he gave on street corners and on home-made demo tapes.

He came to prominence just as rap was shifting from the living rooms of city project buildings to dance clubs and finally the airwaves. By 1988, a New York Times headline read: “It’s Official: Rap is in the Mainstream.” Christopher Wallace, under his stage name Notorious BIG rode that wave and among his hits still played around the world was Sky’s the Limit , the very phrase which was more or less inescapable in Ireland this week.

The magical thing about the GAA is that although it is runs through the heart of Irish life, it has gone mainstream. It has never been high street. You can live your life through the GAA or ignore it entirely.

In the last 30 years it has made the transition from being a conservative, suspicious entity into the occasionally exasperating but exuberantly confident and versatile organisation it has become.

The forthcoming All-Ireland hurling championship is among the most hotly anticipated ever. Gaelic football has moved from all-out defence to total attack in three seasons and may move back again: it has never been faster or more intriguing. Attendances are strong and TV companies are vying for broadcast rights.

This could well be the Golden Age of Gaelic games. Good luck to them. The TV decision is brave. But the danger is that if the GAA moves towards the mainstream and invites the world into its house, then Gaelic games may some day become just another sport, just another choice, just another product to be consumed. And if that happens, then the very point and essence of what Gaelic games are right now– the magic that can never be fully articulated – will have become extinct.

1 Justin Thomas tames Winged Foot to lead US Open
2 Head-to-head: Jack Conan and Billy Vunipola know how to lead from the back
3 Tour de France offers magical escape but is it all make believe?
4 Bradley hails ‘outstanding’ Shamrock Rovers effort as Milan’s class wins out
5 Paris in green beckons for Sam Bennett after passing final Alpine test
Real news has value SUBSCRIBE
Here is your handy guide to sport on television this week