Clare Balding reining herself in to advocate for female sport 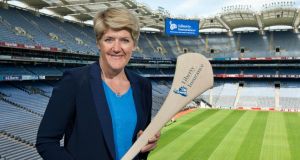 You leave suite 637 up in the gods of Croke Park wondering what it would take to bottle Clare Balding’s vigour.

She is a whirlwind of positive energy, even if – at one point – this goddess of sports broadcasting confesses, with a little chuckle, and using a horse racing analogy, to “reining myself back” in terms of workload.

On Wednesday night, she attended a literary festival in Althorp in the English midlands hosted by author Lord Charles Spencer, brother of the late Princess Diana; yesterday she was in Dublin to reveal Liberty Insurance’s “Wise Up” study on Women in Sport in Ireland; and last night she was in London to present the First Women awards.

Oh, and the other day, she was named as the new presenter of BBC television’s Wimbledon highlights . . . to go along with her Channel 4 racing and all her other broadcasting commitments, both sporting an non-sporting.

If that workload is, as she puts it, a deliberate case of doing “much, much less,” then it provides an insight in its own way in how Balding works. She grew up immersed in horse racing but she has brought that passion to a wide range of other sports and has won awards for fronting the BBC’s Olympic and Paralympic Games coverage.

She brings huge passion to her job and also to her role as an advocate for improving the lot of women in sport.

“I have tried in the last three years to also strongly support women’s sport, because it is where I can make a difference; it is where luckily my voice will be heard . . . . we have had a massive lift in terms of the attention given to women’s sport and the investment in it. I think it is changing, and it is why I wanted to be here, because it is very interesting research and because if you can make a difference for any girl aged 15 and below, her life will be different because of that.”

“As Billie Jean King put it, ‘if you want to be it, you have to see it’,” recalls Balding, adding: “Watching women push themselves beyond what most of us would consider painful barriers is enlightening and inspiring.”

Balding has shown her own ability in breaking into what was once seen as a male domain and forging a career as a leading sports broadcaster.

She is now keen to use her position to improve the lot of sportswomen and to encourage girls to be involved in sport.

Of her own ability to seem so at ease in front of camera, Balding says that it is about connecting with the audience.

“I try very hard. I think it is a realisation you come to after a while where the world stops revolving around you. I think that’s part of maturity, that we all do at some stage in our jobs, when the job becomes your career and you then realise, ‘actually, this is not about my role in this, this is about the event’. Everything I have done in the last two, three years, and it is probably only that recent, has been to turn the camera out. It is to put the spotlight on the event and that really works, people enjoy it. If I can help them feel immersed in an event, then I will. I am very enthusiastic, I love what I do.”

She recalls one of the earliest tips she received when starting out as a trainee with Radio 5 Live. Someone told her, “Push yourself out of your comfort zone and don’t be afraid to take risks”.

It is something that struck a chord: “And that means you are going to make mistakes and I have made plenty. But what I am better at now is acknowledging them, straight away and luckily on air if you do say something wrong, you can say straight away ‘I messed up, I am sorry’.”

Horse racing. Rugby, union and league. Soccer. Tennis. Golf. Whatever it is, Balding brings her passion to the job; as an advocate for women in sport, there is a similar commitment.

“Women’s sport is such a visual, powerful image of women being allowed to be strong and confident and ambitious and competitive and those not being seen as bad things.”