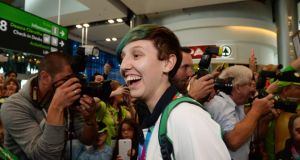 And if satisfaction was weighty too, then the 30-plus personal bests achieved by the 88-strong team in their sporting disciplines would have made the load that bit heavier.

Choosing a single name from the list of women who contributed to that record of success at the Games was a taxing enough task, there were far too many options, but in the end we went for Dublin teenager Sarah Byrne who excelled for the basketball team throughout the competition, starring again in their gold medal match against Mexico on the final day.

A gruelling enough schedule it was too for the team, India, Japan, Russia (twice), Australia, Ecuador (twice) and Mexico (twice) providing the opposition, Ireland winning six of their games and drawing one.

Byrne, a silver medallist from the 2011 Games in Athens, was top-scorer throughout, her highest tally coming in the first meeting with Mexico when she helped herself to 21 points in a 31-25 win.

The gold medal match against Mexico at the University of Southern California was a decidedly closer affair, Ireland trailing for most of the game but finding themselves level with just 10 seconds to go – at which point Byrne got the basket that sealed gold. Unconfined joy, then, for the squad, made up of Byrne, Ann Marie Cooney, Amy Duffy, Nichola Farrell, Laura Mangan, Lydia McGowan, Clare Nolan, Megan Reynolds, Laura Reynolds and Michelle Stynes, as well as head coach Vicki Ronning and her assistant Antoinette Campbell.

Ronning had worked with this group of players for the past nine months, and spoke of her immense pride in their commitment and efforts after their success.

For Byrne it was just a “dream come true”. She spoke before of her love of the game and how the Special Olympics had transformed her life.

“Since I started I’ve come on a lot, with talking to people, I have a lot more friends, I’m much happier. I’m a real shy person, but when I’m out on the court I’m not shy at all, I just do what I do and what I love.

With that gold medal in her luggage, losing wasn’t an issue.