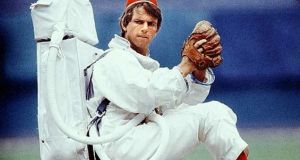 Bill Lee: On different days, he took to the field wearing a gas mask, a Daniel Boone coonskin cap, and a hat with a helicopter propeller whizzing around on top.

The candidate listed on the ballot as Bill ‘Spaceman’ Lee turned up for the first Vermont gubernatorial debate, wearing jeans and a rather garish Hawaiian shirt, replete with a swimsuit-clad woman on the breast pocket.

Befitting a representative of the Liberty Union Party (“So far left, we’re right”), he has used his platform to advocate for turning the New England state into a socialist idyll. His manifesto includes devoting more acreage to sheep-rearing, creating an indigenous baseball bat industry and battling the scourge of heroin by turning schoolkids on to the endorphins-releasing joy of exercise.

“Women are going to be fine in my utopian environment,” said Lee, offering a further glimpse of his world view.

“They’re going to run the show, because a lion sits on his ass and licks himself. It’s the females that go out and hunt.”

Between 1969 and 1982, Lee pitched in the major leagues, mostly with the Boston Red Sox where he earned a hard-won reputation as arguably the most maverick athlete that city has ever seen.

Better pitchers took the mound but only one left-hander spent his downtime hanging with the iconoclastic George Kimball, late of this parish.

His zest for the counter culture explains why he was immortalised in song by Warren Zevon and They Might Be Giants, and profiled at length by both Sports Illustrated and High Times.

Of even more import, he also railed against his own team’s dearth of brown and black players and, much to the consternation of the more intransigent pockets of Red Sox Nation, loudly supported the federal judge who ordered forced busing to finally desegregate the city’s schools in the 1970s.

On the day in 1971 that astronaut David Scott dropped a hammer and feather on the moon as part of an experiment, Lee happened to pitch the Red Sox to victory over the Baltimore Orioles.

When reporters asked him to explain the meaning of the result, he responded with a question: “What do you guys think landing on the moon meant today?”

Somebody dubbed him Spaceman after that. The name stuck and it suited.

In a sporting world hallmarked by conservatism and lorded over by the strait-laced, Lee’s mercurial antics tormented the authorities, led to constant and costly clashes with his coaches, but always entertained.

On different days, he took to the field wearing a gas mask (to protest air pollution of course), a Daniel Boone coonskin cap, and a hat with a helicopter propeller whizzing around on top.

Hours after having the ligaments in his pitching shoulder torn in a 1976 brawl with the New York Yankees in the Bronx, he could be found propping up a Manhattan bar with Kimball, drinking shots and popping pills to dull the pain.

His cavalier approach may explain why earlier this summer, Spaceman, a biopic based on just two weeks in his extraordinary life hit the big screens.

“It is not so much that anyone objects to Lee jumping off motel balconies into swimming pools, or playing Frisbee games with bleacherites,” wrote Curry Kirkpatrick in Sports Illustrated in 1978. “Or making references to his own error-prone infielders as ‘guys who are lucky they can see’ and to former Yankee manager Billy Martin and the New Yorkers as ‘that neo-Nazi and his Brown Shirts’. These are run-of-the-mill nutty things to do and say. Mere rattles in the playpen of flakedom. Lee is not satisfied with such kid stuff.”

Indeed he wasn’t. Just a decade after that was written Lee made his first madcap foray into politics, the presidential candidate for the American wing of Canada’s Rhinoceros Party. Despite running under the slogan, “No guns! No butter! They’ll both kill you!” and proposing to flatten the Rocky Mountains so as to improve the weather in Alberta, he somehow failed to impact on George HW Bush’s ultimate victory over Michael Dukakis.

He had previous with the Bush family, claiming to have smoked pot with George W under the Tyrannosaurus Rex exhibit at Boston’s Museum of Science in 1972.

That revelation generated quite a few headlines earlier in this campaign but that he’s currently polling at just two per cent suggests he won’t be moving into the governor’s mansion just yet. No matter.

He has been a refreshing breeze at a time when national politics gives off such a rancid air, regularly using his heightened profile to castigate both Trump and Hillary. Then there’s his explanation for getting into the Vermont race.

In his Red Sox pomp, Lee had a Henry David Thoreau quote above his locker that read: “If a man does not keep pace with his companions, perhaps it is because he hears a different drummer.”

His creed. Then and still.

1 Jack Nicklaus’ Trump endorsement leads to avalanche of dismay
2 Six Nations - France v Ireland: Kick-off time, TV details, permutations, team news and more
3 Ireland, France or England? Who needs what to win the 2020 Six Nations
4 World Handicap System: What is it? How does it work? Will my handicap change?
5 2020 All-Ireland Senior Hurling Championship key dates
Real news has value SUBSCRIBE
Here is your handy guide to sport on television this week