Andy McGeady: Clermont’s lack of preparation is a warning

Seasons are rarely defined by one event, but all those small moments will add up 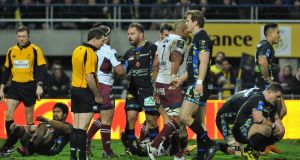 One hundred and eight years ago a 19-year-old Wisconsin kid named Fred Merkle stood on first base for the New York Giants. Neck and neck in a National League pennant race with the Chicago Cubs, the next play would be forever associated with his name.

It was September 23rd at the Polo Grounds, that great, long-departed horseshoe of a ballpark at the north end of Manhattan. Bottom of the ninth, tied one run apiece, the Giants celebrated thinking they had won the game courtesy of a hit that scored Moose McCormick from third base.

While the details of what happened next were contentious, the outcome saw McCormick’s “winning” run struck off and a tie declared. Johnny Evers, Cubs infielder, had convinced the officials that Merkle hadn’t touched second base before running from the field. The teams went on to finish the season deadlocked. That tied game was ordered to be replayed. The Giants lost, and that play would be uncharitably remembered as “Merkle’s Boner”.

There is rarely one moment that decides a game, much less a season. Instead, both are culminations of countless moments. Small decisions, actions and contests. They all add up.

Jarlath Regan recently hosted Brian O’Driscoll on his podcast “An Irishman Abroad”. The retired Ireland captain talked about his belief in process versus outcome. “I’m a big process person. I don’t really think about the end result, I just think about the moment and try and win that moment. It could be 80 moments in a game, and if you win all of them it’s pretty difficult to not have a good performance yourself and for that to have a knock-on effect to everyone else.”

One is reminded too of the British cycling coach Dave Brailsford’s emphasis on margin gains: breaking down each tiny element of performance and trying to improve each by one percent. They all add up.

Their water-carrier had trotted onto the field at the previous break in play – had he told the team what they needed? Did they forget – as suggested by France-based journalist Gavin Mortimer – that a losing bonus point in Europe only required them to finish within seven, not the five points needed in France? Had they concentrated their all on simply gaining more match points than Ospreys (who had already secured any tiebreaker over Clermont) and forgotten about Exeter?

With all four teams in Pool Two having had a chance to go through, the maths had been complicated. In the last five minutes of play, where various tie-breaker scenarios whirled in and out of view, they got very complicated.

Parra said afterwards they didn’t know what was going on at Sandy Park, but also that their failure wasn’t down to one play, or one day.

True. They had allowed two bonus points late in their home win against Ospreys and missed out on their own bonus point in Bordeaux (a day when Bordeaux had a man sent off on 51 minutes and for six minutes played with 13). Parra’s club president would echo Parra’s words a day later, saying his club had erred by focussing purely on winning the game.

A century ago Merkle’s manager, John McGraw, defended his man. After all, his Giants had lost other games that season. It wasn’t down to one play by one man in one game. Similarly, Clermont’s failure was not all down to one decision by one player on Sunday. But the gaps in preparation that lead to that moment of decision-making might be the clearest sign yet that things are not all well in the land of Les Jaunards.