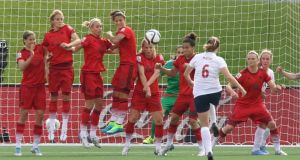 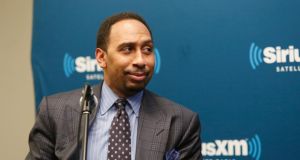 ESPN host Stephen A Smith is in trouble again after his latest offensive comments.

As part of SportsCenter’s ‘top ten’ plays last Friday, ESPN showed Norway’s Maren Mjelde curling an exquisite free-kick over the German wall at the women’s World Cup. While commentators in other media outlets accurately described her wondrous equaliser as Pirloesque, the men in this particular studio preferred to concentrate on some of the Germans turning their heads as the ball arced above them on its way to the top corner.

“They might not have wanted to mess their hair,” said Stephen A Smith. “It’s possible.”

For this calibre of interjection on a variety of the network’s roster of depressingly vacuous talking head shows, Smith is paid a reported $3.5 million (€3.1 million) a year. Nice work if you can get it.

Within hours of his comment, the 47-year-old pundit was being taken to task by his employers and there followed the obligatory apology, albeit on Twitter, where he claimed his comments were “flip” and “in poor taste”. From anybody else, such a mea culpa, however perfunctory, might have sufficed.

For Smith though, this is the latest in a series of unseemly outbursts. Witness his advice to women last summer when discussing NFL running back Ray Rice punching his girlfriend out in the elevator of an Atlantic City casino.

“Let’s make sure we don’t do anything to provoke wrong actions,” said Smith. “Because if I come, or somebody else come, whether it’s law enforcement officials, your brother or the fellas that you know, if we come after somebody has put their hands on you, it doesn’t negate the fact that they already put their hands on you. So let’s try to make sure that we can do our part in making sure that doesn’t happen.”

That especially offensive piece of counsel, and his even more tortured subsequent attempts at trying to justify those remarks, earned Smith a one-week suspension.

Between that controversy and this, he has continued to offer up a steady diet of ill-conceived bombast and blather.

As an African-American, he routinely charges others with racism while simultaneously evincing a rather prehistoric brand of sexism. Having initially cultivated a national reputation as a sports columnist with the Philadelphia Inquirer, he has morphed into the televisual equivalent of an internet troll.

When Terry O’Neill, president of the National Organisation of Women, called for NFL commissioner Roger Goodell to resign last season due to his mishandling of the league’s domestic violence epidemic, she was speaking as head of the country’s leading feminist group. A title that didn’t prevent Smith questioning her sanity and downplaying the scale of a chronic problem.

“I’m sorry, I think this woman is off her rocker. I think she’s lost her mind,” he said. “That’s right, I said it . . . why are we talking about the NFL as if it’s some cesspool for domestic violence? There’s a few cases. It’s being dealt with.”

For spouting that sort of headline-generating guff, Smith, and regular onscreen sparring partner Skip Bayless, epitomise so much that is wrong with ESPN these days. A network capable of producing seminal documentaries and ground-breaking live coverage now devotes way too much air time to bloviators, men (and a tiny sprinkling of women) paid lavish amounts to mouth off as contentiously as possible on topics about which they often know too little and care even less.

Over the past few weeks, Smith has been in rare form. He’s alleged that the Philadelphia Eagles’ coach Chip Kelly was trading away players because they were African-American, a claim slightly undermined by the fact he replaced most of those who left with other African-Americans.

Then, when the Golden State Warriors were in trouble earlier in the NBA finals against the Cleveland Cavaliers, Smith reckoned their white coach Steve Kerr was receiving an easy ride from the media because of his pigmentation. That would be Kerr the rookie coach on the cusp of leading his team to an historic title as the culmination of one of the greatest debut seasons in the history of the sport.

In an age when exaggerated opinion is valued over true reportage, ear-splitting volume trumps factual knowledge every time. In this dystopian environment, Smith has flourished, becoming the sporting world’s go-to shock jock, so practiced at being strident on cue that one newspaper has even dubbed him ‘Sir Loud’.

An increasingly tiresome schtick, it has, nevertheless, gained him such notoriety that he stars in television commercials alongside athletes, a testament to the reach of ESPN and the lucrative nature of modern infamy.

Along the way, he has also tried to style himself as confrere and confidant to the stars. When he spent time with Floyd Mayweather Jnr for a fawning profile earlier this year, it wasn’t so much an interview as an extended audition to be a member of the fighter’s posse. That he has regularly defended Mayweather’s horrendous (count the convictions) record of domestic violence also explains why, after the Mjelde brouhaha, the website TMZ ran the headline, “Stephen A Smith apologising to women . . . again!”

The problem in a nutshell.