Brain damage from tackling by high school players is not incidental, it is inevitable 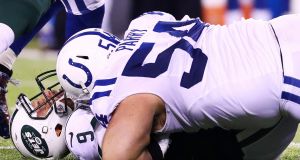 High school players will incur between 500 to 1,000 hits to the head during a season, the true cumulative impact of which may not be known or felt for decades

Cassondra Singleton didn’t want her son Aaron playing grid-iron anymore but, just a few days before the season began, she gave in to his pleading and relaxed the prohibition. Few mothers in north Texas can stand between a 15-year-old boy and his desire to don helmet and pads for the school team.

Five weeks ago he received a heavy hit in a junior varsity game that left him a little unsteady on his feet. Having walked off the field unaided, he began to complain of a headache on the sideline. A blood clot had formed in his brain and he died the next day.

In the ongoing national debate about whether high schools should ban tackle football altogether, it’s startling how deaths like Aaron Singleton’s (there are an average of 12 such fatalities each season) don’t seem to be invoked that often.

Even when Pediatrics, a medical journal, published a report this week in which it charged three doctors with evaluating the issue, the participants didn’t harp on about the spectre of those kids who go out to play and never come home.

“These principles recognise the obligation of physicians to their patients, in this case the population of high school football players and their parents, and the community at large, to provide their guidance and expertise on what is clearly a health problem...Pediatricians should advocate for the discontinuation of high school football programmes until, and more importantly, unless we can be assured that it does not have long-term detrimental consequences.”

Of the million or so kids who play for their schools each year, one in 14 will suffer a diagnosed concussion, a rate about 60 per cent higher than the next sport.

Depending on which statistics you believe, they will also incur between 500-1,000 hits to the head during the course of a season, the true cumulative impact of which may not be known or felt for decades.

Yet, Margolis was the only one of the three medical professionals to call for an outright ban. The others merely wanted stricter concussion protocols, improved coaching about tackling (in many American schools rugby is increasingly the instruction model in this regard), and greater availability of professional treatment on the sidelines.

The argument is clouded by both sides being able to constantly produce studies and to unfurl numbers backing up their contentions. For every doctor highlighting the obvious deleterious effect of repeated brain-shuddering blows (or having your bell rung as traditional machismo would have it described), there are others willing to testify football is no more dangerous than soccer.

“If we eliminate football, what sport is next and what is our threshold?” asked Dr Greg Canty. “Who is going to be responsible for defining ‘safe play’?”

This kind of thinking ignores one significant cultural and physical difference. Unlike their grid-iron peers, soccer players do not start doing off-season weight training and working to bulk up from the age of nine. Even without casting aspersions about steroids coming into play somewhere along the way (which evidence suggests is commonly the case), the average high school linebacker is a rippling mass of muscle bent on delivering mayhem.

These are 17-year-old boys who hit like overgrown men. Concussions and brain damage aren’t incidental, they are inevitable.

For school districts the issue is also ethical. Given their mission to educate and improve students, how can they justify spending large chunks of their budgets underwriting a sport that may be inflicting long-term damage on these boys?

Some Texan high schools splurge $500,000 a year on the football team and a couple play home games in purpose-built 20,000-seater stadia that cost $60 million. In a lot of these communities each match is an event that draws people together in a way far beyond sport. This is not something many of them are likely to give up.

Even those school districts that have already gone for the nuclear option and discontinued teams are finding that parents have merely redirected their energies to establishing club sides in their stead.

After a 20 per cent drop in participation numbers of younger kids between 2009 and 2015, coinciding with revelations linking the NFL with chronic traumatic encephalopathy, more boys have returned to the football fields of America over the past year. Against that background the best option would seem to be education rather than eradication.

“What is needed is an organised campaign much like the campaign on the dangers of smoking,” wrote Buzz Bissinger, author of Friday Night Lights, the definitive book that spawned the cult television show.

“If high school kids want to play football and their parents want them to play football, then they must be reminded of the risks. Over and over and over. Just as a smoker is every time he buys a pack of cigarettes with the warning label about lung cancer, heart disease, emphysema and complications of pregnancy.”

Bissinger has also advocated for signs in the locker room cautioning players about the risks, and for parents and fans entering stadia to be handed photographs showing what the atrophied brain of a former football players looks like. Radical. Drastic. Where we are now.