“It is a family business but not just the Ryan family, it's the Yamamori family”

While the three Yamamori locations in Dublin maintain their own personality and vibe, the same work ethic and sense of family is behind all of them, according to the Ryan family 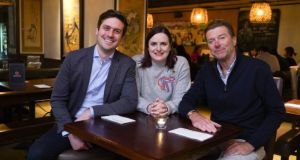 Left to right: Son Graham, daughter Julie and father Derek Ryan: “We don’t just want to provide food, we want to look after people - both customers and staff. People really love that feeling of being remembered and feeling cared about”

Dublin was a very different city when Yamamori first opened its doors back in 1995. “George’s Street back then was derelict,” says Derek Ryan, who had the single-minded vision to introduce Japanese food to the city. “There were trees growing out of the front of Dunnes Stores, and over half the street was empty,” he recalls, “Hogan’s hadn’t opened yet, but there was the Long Hall and The George, and they made up the nucleus of the street. I was around 36 at the time and people my age were going home when the lights went down on George’s St., they didn’t know what was going on after dark. It was the bohemian quarter and I felt like I had to be there. It was probably the best move I made.”

The premises that became Yamamori on George’s St. had been lying idle for nine months, with a string of failed Chinese restaurants previously occupying the site. The culinary scene in Dublin was limited at the time, Derek says, though a trip to London opened his eyes to the potential.

“I’d heard that Japanese food was taking off in London,” he says. “So I went to London one day, ate one Japanese meal in Soho, came back that night and decided to open a Japanese restaurant. It was a day trip that changed everything, and we did it on a shoestring. The first couple of years were very rocky but after that it became the party place of Dublin. Yamamori was where all the actors, artists, musicians came. I think they were attracted to it because it was different, and I gave everyone a chance there. I didn’t know what I was doing, but somehow got there.”

Right from the beginning, Yamamori was a family affair. “My first memory of Yamamori was the day that my dad got the keys, I was around six years old,” says Graham Ryan, Derek’s youngest child and current general manager of Yamamori. “We were in my grandmother's house and Dad came to pick us up. I remember he said that he had bought a restaurant and all the kids were very excited, then we all got in the van and drove down. I remember exploring the place and seeing what worked and what didn't, there was actually a pond in the back of the restaurant, a feature from the Chinese restaurant that used to be there, and I remember trying to see if there were any fish in it, that day is a very vivid memory for me.”

The desire to start in the family business was there from a young age for Graham. “When I was in school, it was strange that my Dad owned a restaurant. Most of my friends’ parents had jobs that seemed less adventurous to me,” he says. “I remember thinking that I would like to do what my Dad was doing, and I was always very happy to be in the restaurant as a kid, I was happy to be around him and learn things.”

Summer jobs turned into more serious roles after Graham left school, and a five-year stint working and living in Japan served as a way to garner experience in Japanese culture and cuisine. “Part of my job now is ensuring the menu is constantly evolving and we stay as the number one food experience in the city,” he says. “We are always bringing something new and unexpected, my favourite dish at the moment is the Black Cod in Saikyo Miso at Yamamori North. The cod is different from the kind we find locally, the flesh is very flaky and oily and it is baked in miso with the skin scorched. The dish is a delicacy in Japan and it is absolutely delicious.”

Graham’s sister Julie also watched the business grow from the early days, and picked up her work ethic from watching her Dad in action. “Like Graham I was involved from a young age,” she says. “My Dad always made the point that if either of us wanted new runners or clothes, we had to earn them. I started off as a teenager in Yamamori washing glasses, and when Yamamori expanded and we opened up our Ormond Quay location in 2008 I started working there, waitressing and working on the bar. Over the years I moved myself up the ranks, and then when our third location, Izakaya, opened up on George’s St. in 2011 I became a supervisor, and then a manager there. Around seven years ago I started to look after the office and HR side of things more, so I went to study and get a diploma in HR and stepped officially into that role.”

Each Yamamori location has its own personality, explains Julie. “They are like three children so of course I love them all equally,” she says, “we always joke about how Izakaya is where you meet someone first, then Yamamori North is where you take them on a date, and the original Yamamori on George’s St. is where you go when you’ve married them and had kids.”

“If I had to pick a favourite it is definitely Yamamori North on Ormond Quay,” she says. “It's just so big and open, and there is so much to it, between the restaurant, the whiskey bar, and it has our Tengu venue out the back as well, which is the place to be if you’re into the music scene. I love it there, it always feels homely to me, it is probably the one place I have worked the most out of all of them.”

While the three Yamamori locations maintain their own vibe, the same work ethic and sense of family is behind all of them, suggests Julie. “There's always a joke that goes around with a lot of the staff that I am the Yamamori Mommy, or the in-house therapist,” she says. “I really love the role I am in now, because I am a people person. I really enjoy connecting with people and uplifting them, and people tend to find it easy to open up to me and I enjoy getting to help them.”

“But I saw my Dad doing that for many years growing up,” she says. “He's always very welcoming towards people and seeing how he interacts with people just rubbed off on me. We have customers that have been with us right through the past 25 years, and we have lots of staff who will come back after travelling or working elsewhere, and seeing them return makes me feel very proud.”

“That attitude toward people has been there from the start, and it is what I want to continue,” she says. “We don’t just want to provide food, we want to look after people - both customers and staff, it is a family business but we always want to make them feel like it's not just Ryan family, it's the Yamamori family. People really love that feeling of being remembered and feeling cared about.”