Ireland’s Atlantic islands are the final frontier along the Wild Atlantic Way. We ventured to Clare Island to get a taste of this wild island life 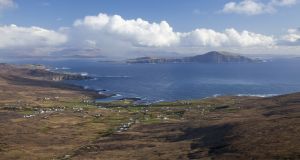 The Wild Atlantic Way has a final-frontier quality: the green fields, the winding country roads, the linear settlements punctuated by pubs, crossroads, churches and a scattering of bungalows. Kilometres of farmland and wilderness stretch in all directions, making it one of the most wild and free environments in Europe, and so far away from city life that you can truly switch off.

Dotted all along the Wild Atlantic Way – the longest coastal touring route in the world – are an assortment of islands, all with their own individual histories, culture and communities. Visiting anywhere along the mainland route is a prize in itself, but if you put in the extra effort to grab a ferry from the mainland you can open up a whole new selection of destinations. For those that have previously remained firmly on the mainland, these rocky outcrops open up nooks and crannies of Irish life you’ve never seen before.

Clare Island in Co Mayo is a 20-minute boat trip from Roonagh Pier where the ferry for the island departs, bringing you to one of the most isolated and yet most welcoming parts of the country. The warmth and hospitality of its residents makes it a wonderful place to launch an exploration of Ireland’s islands.

Cars are discouraged, so for visitors travelling its winding, narrow roads, walking and cycling are the best modes of transport

The short journey across Clew Bay brings you to Clare Island Harbour, with its arcing Blue Flag beach and the town’s main village and social life encircling it. Somewhere in the region of 160 people live on the island, with the main facilities focused around the town and harbour. There are two pubs – the Sailor’s Bar and Restaurant and the Community Centre, a convenience store and a heritage centre, which details the history of the island.

It’s in places like these that you’ll get to meet the locals, like barwoman Becky Tilston who, after a stint running a bar on a private island in the British Virgin Islands, found Clare Island and fell in love with it. Or meet her colleague, Megan O’Malley, an 18-year-old with a knowledge of the island formed by an entire lifetime living there.

Accommodation providers on the isand are also your guides, whether you choose one of the island bed and breakfasts, the Go Explore Hostel, or at the upper end of the accommodation scale, the converted island Lighthouse, perched on the craggy cliffs watching over Westport and Achill.

Like on the majority of Ireland’s islands cars are discouraged, so for visitors travelling its winding and narrow roads, walking, bike rental or getting a lift from a local are the best modes of transport to get around. A walking loop of the island can be completed in a few hours and on that circumnavigation you can see all the main sights: the 12th century Cistercian abbey, where the remains of pirate queen Grace O’Malley is believed to be buried, and the pirate queen’s castle located adjacent to the harbour. Ancient sites such as a standing stone, a number of fulacht fias and a Megalithic tomb, all dot the island.

RUGGED COASTLINE
The natural, rugged coastline of the island is perhaps its biggest draw, with the cove on the north-east of the island a perfect swimming and snorkelling spot. A ladder is built into the rocky outcrop to enter and exit the water and offers stunning views out towards Achill Island.

In the interior, you can hike up Knockmore Mountain, which takes around three hours all in, and rewards with stunning views out over the Atlantic and Clew Bay and back across to mainland Mayo. The island also attracts visitors for spiritual getaways at Macalla Farm, which runs yoga and mindfulness retreats, while Clare Island Adventures caters for coasteering, orienteering, raft building, archery and beach games for children.

But you don’t need to do much more than have a few conversations to appreciate the real natural resource of the island: its people. From the natives, to the blow-ins, to the visitors, the remoteness of the island means that it draws dreamers and free thinkers as well as those seeking a new adventure along the Wild Atlantic Way.

Those that visit the island all tend to share a desire to experience an Ireland that is based on traditional values and the opportunity to experience the wildness of the Atlantic, an appeal that could be applied to any of the islands along the Wild Atlantic Way.

Carl O’Grady, brother of ferry owner Brian, is the island’s Richard Branson, cooking up entrepreneurial schemes such as the first-ever Irish whiskey to be matured in the Atlantic Ocean – located in the hull of an old Clare Island ferry in the harbour – which will be ready for tasting in 2020; his friend Kenneth Finn is a Wexford-raised, Maastricht-trained architect, with a passion for the island born out of his college-commenced friendship with Carl, that led to him upping sticks and setting up home there.

It’s this rich tapestry of humanity that is the real culture of the island and the glue that makes the place tick. The community welcomes everyone who emerges off the ferry and invites them to experience what makes island life unique.

The islands of the Wild Atlantic Way are for escaping and – even if only for a fleeting moment – immersing yourself in the Irish wilderness and breathing in deep.

Exploring the Wild Atlantic Way islands could fill many holidays, with 26 accessible islands dotted along the western shore. Here are just five to get you started:

Located to the north of Clare Island, Achill offers the same beautiful landscape of County Mayo, but is more accessible, with a bridge connecting it to the mainland. Once on the island there’s a 40km Atlantic Drive that takes in the best of the island.

Perhaps the most-visited of all the islands, Inis Mór is the largest of the three Aran Islands, and offers visitors the chance to experience the prehistoric hill fort Dún Aonghasa, which is built right up to a cliff-face looking out over the Atlantic.

DON’T MISS: A cycle or walk around the island.

The largest inhabited island off the coast of Donegal, Arranmore is also in the Gaeltacht and lets visitors immerse themselves amongst speakers of Ulster Gaelic. The islands are renowned for their music and storytelling.

UNESCO World Heritage site Skellig Michael is 13km off the coast of Kerry. The island was featured in Star Wars: The Force Awakens, but has long been one of the standout Irish travel destinations.

DON’T MISS: The monastic beehive huts at the top of sea cliffs and reached via 600 stone steps.

The Blaskets are a magnificent example of the peril and beauty of island life. Celebrated in Irish literature, they were inhabited until 1953 when the last islanders were evacuated. They left behind islands of stark beauty.

DON’T MISS: The incredible beaches, uplands and the remains of the islanders’ homes.