The rugged coastline and enchanting lure of Donegal is a great example of the experience on offer all along Ireland's Wild Atlantic Way. Here are ten great stops along the route we think you shouldn't miss 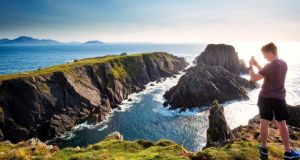 Malin Head is rugged and unspoilt. From Banba’s Crown, you will see Inishtrahull Island and its lighthouse, and further east, on a clear day, you can see the Scottish hills

Donegal is a jewel in the crown of the Wild Atlantic Way. It is a county that is alive with magical, majestic sights and a ruggedly beautiful coastline where you will find many of its most outstanding treasures. By its crashing North Atlantic waters you will find the warmth of local hospitality, dreamy beaches, delicious fresh seafood in cosy pubs as well as the rich language, music and culture that defines the soul of the Wild Atlantic Way in this, its most northerly part.  You have not lived until you have felt the scorch of sun on your back on a Donegal beach, rare as it might seem; or the warmth of a crackling turf fire’s warm embrace when you visit. Here are some of our Donegal highlights on the Wild Atlantic Way:

One of the best ways to see the coastline of the Wild Atlantic Way is from its islands. Arranmore island is an idyllic, Gaeltacht island near Burtonport harbour in the Rosses off the north west coast of Donegal, and is the largest inhabited island in the county. There are memorable ways of making the most of your trip to the island which include diving, deep sea angling, seal watching and the sea safari and marine heritage tour.

The stunning waters around Arranmore and the unique typography make this a world-class diving site and the nutrient-rich Gulf stream waters make it a popular playground for marine life. It is recommended for divers with some experience and all levels are catered for. On the sea safari you will see the stunning sea stacks and cliffs around the island, and maybe a dolphin or two if you are lucky. The island is popular for its tranquillity and scenic walks where you can drink in the Atlantic views and relax into the Wild Atlantic Way pace of life. And there’s no shortage of craic with six pubs and it is the only island in the country with a nightclub.

The majestic 19th century Glenveagh Castle is in the heart of the hauntingly beautiful Derryveagh mountains, one of five national parks on the Wild Atlantic Way.

Built by John Adair for his beloved wife Cornelia, it was designed as a “Victorian Camelot” and a summer retreat. After touring the astonishingly beautiful castle, make sure to visit the masterpiece of the estate; its gardens. It was for Mrs Cornelia Adair that the gardens were constructed. They are remarkable, especially when you see the surrounding wild bogland and moors from which they were created, the beautiful views of the lake and the original outdoor swimming pool. Glenveagh national park includes 16,000 hectares of parkland, home to a diverse range of wildlife including red deer and golden eagles.

A visit to Ireland, never mind Donegal, would be seen in the half-light rather than its full glory if you don’t visit the country’s highest sea cliffs, Sliabh Liag, a spectacular highlight of the Wild Atlantic Way and one of 15 signature discovery points along the route. Located in the south west Donegal Gaeltacht, these are the highest accessible cliffs in Europe measuring 1,972 feet (601 metres).

This height, along with the indescribably beautiful views across Donegal Bay, resembles the sort of natural expansive painting that humbly reminds you just how tiny you are in the world. If you’re an experienced walker make sure to brave the famous “One Man’s Path” to reach a superb vantage point of the cliffs, and the best of the views.

While you are in the area seek out the new local Donegal whiskey, “The Silkie”, from the Sliabh Liag Distillery, a new Irish whiskey company. They are building the first distillery in Donegal for more than 170 years in Carrick, on the landward slopes of the Sliabh Liag sea cliffs. They have already launched their first brand “The Silkie”, which is a blended Irish whiskey, and have commissioned An Dúlamán Gin Distillery in Carrick. An Dúlamán Irish Maritime Gin is distilled in small batches and to a recipe with a “touch of Donegal devilment.”

The views from Fanad Lighthouse are breathtaking and not surprisingly this is another signature discovery point of the Wild Atlantic Way. It lies on the Fanad Peninsula between Lough Swilly and Mulroy Bay, looking towards Ireland’s most northerly point, Malin Head. What is wonderful about this lighthouse, which is still in operation, and marks its 200th anniversary this year, is that you can now actually stay in there.

The newly refurbished self-catering lighthouse keeper cottages are one of the best ways to truly experience the Wild Atlantic Way and the scale and force of nature of the ocean that the lighthouse was built to watch over. There are three cottages you can steal away to for either a romantic break, family trip or with friends to truly embrace the raw Wild Atlantic Way experience. While there make sure and visit Ballymastocker Bay, frequently rated one of the world’s most beautiful beaches.

This is the most northerly point in the country and its spectacular scenery makes it obvious why it was used as a location for filming parts of Star Wars Episode VIII, with some of the filming on cliffs out from Banba's Crown, a headland where the Aurora Borealis or “Northern Lights” are often seen. The name Banba derives from a mythical queen of Ireland which adds to the magic of Malin.

Malin Head is rugged and unspoilt and its beauty belies its significant history; from the first telecommunication in Ireland at Lloyds Signal Tower, to the passing of the German Fleet at the end of World War One.

From Banba’s Crown, you will see Inishtrahull Island and its lighthouse, and further east, on a clear day, you can see the Scottish hills. Boat tours and walking tours are available locally.

Dunfanaghy's Horn Head, which juts out onto the Atlantic,is well worth the incredible views across Sheephaven Bay and one of the finest views you will find of Tory island.

Standing at the top of this spectacular spot in north west Donegal reminds you of why the Wild Atlantic Way is so special. There are lots of superb walks in the area. Venture on to the marvellous Marble Hill and explore this beautiful Blue Flag beach which is not only a joy if you have buckets and spades, but one of the most popular spots in the county for surfing and water sports. If you do opt for a surf take time out for a coffee at the Shack on Marble Hill beach and reflect on just what makes Dunfanaghy a place that is hard to leave.

Donegal Town is a buzzing, thriving centre rich in history and the ideal place to stop off while travelling north or south of the county. The River Eske runs through the town and a visit to Donegal Castle (above) is a must. Fully renovated, a tour of the castle and grounds is a great introduction to the lives of the 15th century Donegal chieftans who built it.

In the town centre you will find its heartbeat; the ‘Diamond’, with local businesses, shops and restaurants, and the perfect place to buy some of the world-renowned Donegal tweed in Magee Clothing. Ensure to take a short trip out of the town to visit Donegal Craft Village. It has fantastic contemporary arts and crafts with workshops on site occupied by exceptional artists working with everything from glass to wood to jewellery.

8. TRADITIONAL MUSIC AND THE GAELTACHT

You’ll find the Irish language spoken all along the Wild Atlantic Way and Gweedore in Donegal has one of the highest percentages of Gaeilge speakers in the country. The connection to this ancient, 3,000-year-old language has left a visible imprint on the locality and is a rich source of the music, heritage and culture of this area.

An unmissable stop on the Wild Atlantic Way is the iconic Leo’s Tavern in Meenaleck. The late Leo Brennan, father of musicians Enya and Moya Brennan from Clannad, was the inimitable proprietor of this famous pub and it is synonymous with Irish traditional music, attracting huge stars over the years. Leo’s still hosts regular music and trad nights and Moya herself is there with her event night “Clubeo” once a month for a wonderful night of talented songwriters and musicians, and usually a surprise guest or two.

This ancient stone fort sits on top of Greenan Mountain at the gateway of Inishowen at Burt and is a direct link back to the myth and magic of the Wild Atlantic Way. Believed to have been constructed in the 8th and 9th century, you will also find a small stone cairn close by that is said to be a burial monument from the early Bronze Age. It’s a windy spot but well worth the trouble to reach as the view from its stone walls is incredible. At least five counties lie stretched before you and you will get a fantastic view of the full expanse of Lough Swilly and Lough Foyle and the mountains and hills of Donegal on the horizon.

For more, see Grianán of Aileach

You don’t have to be a trainspotter to enjoy this gorgeous historical old rail track that has been reclaimed into a walkway and cycle trail from Burtonport (above) to Meenbanad in north west Donegal. It has been restored from the old narrow-gauge railway track line that was built to serve the excellent harbour in Burtonport in its heyday.

The path runs to about 10.46km, but it is important to note that it has some very steep sections. It is a glorious walk peppered with sparkling views of the offshore islands, Loch Waskel and woodland areas. There are lots of features from the original railway like gatehouses, pillars, rusty gates and embankments; the bittersweet scars of a bygone era in the county.