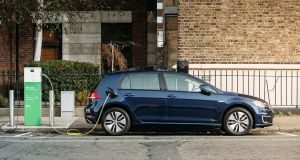 Paul Hand, senior press officer at ESB: “The driving range of EVs is improving all the time meaning that the vast majority of journeys made by Irish drivers can be completed on one charge”

Ireland’s electric car story has taken a few twists and turns over the years. From what looked like a promising start with some lofty ambitions from both government and manufacturers alike, the recession in Ireland stalled progress to a crawl. Finally, however, it seems there is a real sense of this technology about to take hold.

We spoke to Paddy Comyn, head of group communications with Volkswagen Ireland and Paul Hand, senior press officer at ESB, about what makes Ireland a suitable market for electric vehicles (EVs) and what Volkswagen has in store for us over the coming months and years in the space.

Ireland has always been regarded as having the potential to be an ideal test-bed for EVs given our size, technologically-minded population and our potential to generate electricity from renewable sources, he notes.

Cost and environmental considerations are other factors. The increasing price of petrol and diesel cars and the fuel needed to power them, as well as ever more challenging CO2 reduction targets at a European level, has added impetus to EV adoption. And with some of Europe's most generous incentives to acquire an electric vehicle including 0 per cent BIK, the EV option is now more appealing than ever.

The average person commutes about 25 kilometres to work. That's 50 kilometres per day. And the savings made on this commute are very significant

"The size of Ireland makes it ideal for an electric vehicle and as the technology develops this is going to become more apparent,” says Comyn. “We are very fortunate with the incentives on offer in Ireland right now for buyers and as the charging network improves driving between our major towns and cities it will become even easier. The e-Golf is capable of up to 300 kilometres on a single charge. But even driving it normally, a range of around 220km is very manageable which in Ireland is still a third of the length of the country.

[The e-Golf is on sale now and for more details on how to test-drive the new model, go to www.volkswagen.ie/electric]

“The driving range of EVs is improving all the time meaning that the vast majority of journeys made by Irish drivers can be completed on one charge,” adds Paul Hand, senior press officer at ESB. “Enabling the electrification of transport is a key part of ESB’s Brighter Future strategy and the company is committed to ongoing support and investment in this area. We currently have almost 1,100 public charge points across the island of Ireland, including fast chargers along main inter-urban routes. The infrastructure North and South of the Border provides public EV charging in most communities of 1,500 people or more. ESB is currently looking at developments in charging technology, including the feasibility of super-fast charging hubs. These hubs would cater for two to eight vehicles charging simultaneously and offer drivers higher charging speeds, resulting in reduced charging times and faster journeys.”

The Volkswagen e-Golf isn't a very frequent sight on Irish roads as yet, but this is likely to change in 2019.

“There has definitely been a cautious approach to this technology, but the stars appear to be aligning to make this technology start to make real sense for our customers,” says Comyn. “It is no secret that comparable diesel or petrol models can drive much further with a full tank of fuel and range always appears to be a huge psychological barrier for customers looking at electric vehicles. However, statistically, the average person commutes about 25 kilometres to work. That's 50 kilometres per day. And the savings made on this commute are very significant.”

Volkswagen estimates someone driving 15,000km per year can save around €640 on “fuel” compared to an equivalent diesel Golf and around €870 compared to the petrol-powered version over the same distance. That is, of course, before you consider reduced M50 tolls, with a potential saving of up to €500 per year, 0 per cent BIK if you have an e-Golf as a company car, and a €600 SEAI grant for the purchase of a home charger, where it is expected that the majority of EV owners will charge their vehicles.

Volkswagen is set to offer a new Executive Edition e-Golf to cater for the business user. This new model comes with the addition of 'Vienna' Leather upholstery, Sports Comfort seats, 17" Madrid alloy wheels, LED lights, tinted rear windows, keyless access, heated front seats, rear-view camera and the Active Info Display - and comes in at €49,495 before Government grants (which reduces it to as low a €39,495 for private buyers). Very importantly, it is still below the €50,000 qualifying cap for 0 per cent BIK.

There are other encouraging developments in relation to EV uptake in Ireland, according to Comyn. "What is particularly encouraging is ESB's recent announcement of their commitment to maintain and develop the electric vehicle charging infrastructure across the country. This, together with the installation in 2019 of a number of high-power charging stations from the IONITY manufacturer alliance, will mean that Ireland will increase its already impressive charging network coverage."

And what about the future of EVs for Volkswagen? “2019 will be very much about e-Golf, but we are also preparing to introduce the ID. range of cars in 2020, which will start with a five-door hatchback. The ID. will be a range of electric vehicles built on a bespoke platform, meaning that they will have been planned from the ground up to be electric vehicles. These cars will have ranges of between 330 and 550 kilometres with fast-charging of up to 125kW. We will release more news on the first of these models in 2019."

The e-Golf is on sale now and for more details on how to test-drive the new model, go to www.volkswagen.ie/electric