In the latest Virgin Media Business Insights Survey, a panel of Irish business decision makers was asked how they rate their growth prospects for 2017-18 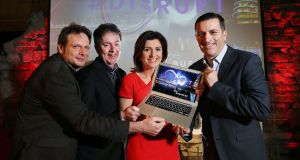 Irish SMEs believe that broadband and digital technology are essential for growth and profitability. This was a key finding of a research report prepared for Virgin Media by Amarach Research earlier this year. A panel of Irish business decision makers was asked how they rate their growth prospects for 2017-18 and 86 per cent said growth would be either good, or very good, with 74 per cent of them saying that growth into 2018 will be due to digital technology. The majority also plan to invest in digital technologies to fuel that growth.

“The most significant findings of the latest Virgin Media Business Insights Survey are those that point to the link between business and employment growth and digital technologies”, says Paul Farrell, commercial vice-president of Virgin Media. “The fact that so many businesses are confident about growth and will create new jobs over the next two years shows the strength of the economic recovery, and long may it last. Businesses are also telling us that the delivery of better customer experiences is becoming more and more dependent on digital. The availability of high speed broadband is also central to the relationship between businesses and customers.”

Indeed, nearly 90 per cent of respondents said their business wouldn’t exist, or would be a lot smaller, if they didn’t have broadband, with over a third saying their business would be less profitable. Consumers having broadband was also rated important by 77 per cent of businesses surveyed. The survey also revealed that businesses expect the online channel to account for 40 per cent of sales in 2017. In addition, the importance of digital skills was highlighted with 88 per cent of businesses citing IT capability as an important precondition when hiring new employees.

Virgin Media is playing a significant role in the provision of broadband to Irish business, according to Farrell. “Virgin Media Business is Ireland’s fastest broadband provider and one of the largest business to business communications companies in the country”, he points out. “Our competitive advantage lies in both our high capacity optical fibre network and the breadth of our product portfolio, which spans the complete spectrum of business communications. As one of the largest telecoms providers in Ireland, we have a very strong presence in Dublin, Cork, Galway, Limerick, Mullingar, Sligo, Athlone, Carlow, Kilkenny and Waterford and 17 other regional towns and cities across Ireland. We are committed to investing in our network, systems and people to provide high quality services to our customers.”

Virgin Media is also supporting the digital economy through its Voom entrepreneurship which is now entering its second year in Ireland. The competition sees businesses pitch their ideas to Richard Branson as they vie for a slice of a prize fund worth over €1.2 million.

The 2016 competition attracted thousands of entries which were whittled down to 160 – 10 per cent of which were Irish ventures.  Irish start-up FoodCloud took second place against extremely tough competition from both Ireland and the UK winning €25,000 for the company, a Virgin Media Business broadband package as well as mentoring and brand support.

Voom is an entirely merit based programme so the most innovative, disruptive and original business concepts are the ones that make it to the top and ultimately present their case to Richard Branson in person.

“Voom provides the golden ticket to propel your business onto a global stage and fast-track your way to success. Last year’s winners are testament to this”, says Richard Branson. “Launching a new business or going it alone takes dedication and determination, if you’ve got that in spades then grab this life-changing opportunity and enter this year’s competition.”

“It’s important that businesses of all sizes and stage of development are encouraged to trade online and to maximise the opportunities presented by the digital economy”, says Paul Farrell. “The overall picture revealed by the Virgin Media Business Insights Report and feedback from entries to the Voom entrepreneurship competition shows a confident business community growing sales at home and abroad, increasing employment, developing new products and services, and investing in digital technologies and online strategies to drive their potential. That’s really great news for Irish businesses and Virgin Media is determined to play its part supporting them in achieving their goals by delivering a top quality broadband service.”