Presenteeism is on the rise at work, but employers can help 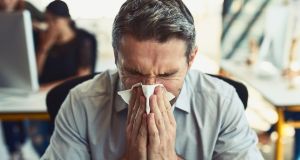 Research suggests the cost of presenteeism to Irish employers could run as high as €15 billion every year. Photograph: Getty Images

Just being there is never really enough when it comes to work, but sometimes being there can actually be the problem. Presenteeism, a phenomenon where people turn up for work even though they are sick, is becoming an issue in many Irish workplaces. People are afraid that not turning up for work will affect their career prospects or, even worse, put their jobs at risk.

However, these people are more than likely harming both themselves and their employers. Researchers in the US have found that presenteeism can cut individual productivity by one-third or more and that it can cost a business three times as much as the absenteeism of the employees who do ring in sick.

A study carried out in the Lockheed Martin Corp in the US some years ago found that employees who came to work sick during the year in question, with ailments such as allergies, headaches, lower-back pain, arthritis, colds and the flu cost the company $34 million.

More recently, research carried out among 2,000 employees across America found that while they were absent from work an average of four days per year each, they confessed to being unproductive at work for 57.5 days each – almost three months of working time. In addition, the same study found that the cost of presenteeism to American businesses was also 10 times higher than absenteeism. Absent workers cost employers around $150 billion a year while those who turned up not fit for work cost $1,500 billion a year.

With the latest estimates putting the cost of absenteeism to Irish employers at €1.5 billion annually, this research suggests that the cost of presenteeism could run as high as a truly staggering €15 billion every year.

Mindfulness at Work founder, Joanne O’Malley works with a variety of large companies as well as partnering with Vhi in offering solutions to their clients to help deal with this costly problem.

“In my experience, presenteeism is prevalent in organisations where long working hours are the norm”, she points out. “I have found that job insecurity contributes to it and leads people to go to work even though they are not functioning at all. We all know that there are organisations which have that long-hours culture and then there are others who genuinely want to take care of their people. I know of cases where employees are afraid to leave work in the evenings in some workplaces and where they can be sent home early for the good of their health in others.”

But she believes employers are not necessarily entirely to blame. “I have found that it can often be the people involved and it’s not the organisation’s fault”, she says. “They stay long hours at their desks just to look good and often admit that they are not productive. That’s a result of the environment we are all working in. Globalisation and technology are not going to go backwards and the pressure they are creating is increasing. People are just doing their best just to keep up, in my opinion.”

When people practice mindfulness at work interest and vitality go up, stress and anxiety go down

It’s an unequal struggle in many cases. “They have the idea that if they run faster and stay longer in work they will get on top of it”, O’Malley notes. “It doesn’t work and just leads to burn-out. Research shows that over 80 per cent of workplace absences are now stress-related in some way. It is important for people to understand how stress works. Most people don’t understand the effects of stress on our bodies. It promotes the production of cortisol and adrenaline which affect the brain. If we understand that it is a process that happens to everyone we can develop an awareness, and that will help us manage what’s happening to us much better.”

This is where mindfulness comes in. “The research shows that if people develop some mindfulness skills they are protective against the impact of stress and lessen anxiety. Happiness goes up. Optimism goes up. Productivity goes up. Cognitive processes improve. When people practice mindfulness at work interest and vitality go up, stress and anxiety go down. Communication, collaboration and relationships improve. These are skills people can acquire quite easily. That’s why a lot of employers are taking an interest in mindfulness.”

According to O’Malley there is expert help available from people like her and many others, for organisations which want to introduce mindfulness to the workplace in order to reduce stress levels and combat presenteeism. But it can’t be just a case of providing a few courses for employees, it has to be embraced by, and led from, the very top.

“The leaders set the tone and culture”, she says. “If you want to bring mindfulness into an organisation it is important to lead from top down. You can provide all the training you want but if the leaders and managers aren’t doing it then it is hard for employees to practice or engage with it. In some organisations, stress is like a badge of honour where you have managers saying they don’t have time for mindfulness. That doesn’t help.”

But more and more major organisations are getting the message. “A CEO of a major entertainment company spoke recently about how he saw it as his responsibility to set the tone and culture and help create an organisation where people can be at their best and be in an optimistic state. It’s about having policies which encourage people to take breaks, take exercise, eat healthily, have a bit of fun, and achieve greater work-life balance.”

And there are simple steps which organisations can take to create a supportive environment for employees. “Just offering a space where people can go if they are under a lot of pressure would be a start”, O’Malley says. “A space for mindfulness would also be positive. You have to allow people to take a breather. Really good leaders create places where people work hard but it’s not depleting them, where they are engaged in work, where they feel part of something bigger and they are not in fear mode all the time.”

The message is clear, employees being at their best rather than just being at work is vitally important and employers can reap real rewards by creating a workplace culture which discourages presenteeism and promotes wellness.

A note from Vhi about Rebalance

We know that when employees nurture both body and mind it can lead to happier employees and better business results. That’s why our health and wellbeing programme is focused on engaging  employees in a culture of wellbeing both in work and at home.

Our approach at Vhi is holistic and proactive, with programmes specifically designed to meet each employee’s needs. We offer services which are accessible by all, sustainable in everyday life and enjoyable too.

Wellbeing with Vhi, is all about two pillars; body and mind. In fact, the old adage of healthy body, healthy mind is more relevant today than ever as the two largest categories of work-related illness are musculoskeletal disorders and stress, anxiety and depression.

Our programmes are accessible to all (not just the superfit), which in turn leads to greater engagement and sustainability. Choose from our range of programmes, including trending topics such as diet and nutrition, fitness and emotional wellbeing.

If you’d like to find out more about Vhi Rebalance call 056 7775800 or visit our website to arrange for one of the Vhi team to get in contact with you.

A healthy workplace by design

The wellbeing audit: working from a solid baseline

Getting the balance right with wellness in the workplace