Shaping the future of Ireland’s cities

A major conference takes place in October, designed to generate fresh ideas about the future of Ireland’s cities 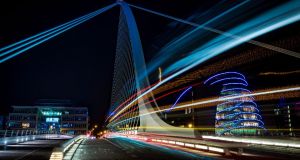 The challenges cities face will continue to grow. This includes everything from sustainability and energy use to safety and effective service delivery. Photograph: iStock

Urban Development – Shaping the Future of Ireland’s Cities, which takes place in Dublin’s Convention Centre, marks the inaugural conference of what Urban Land Institute (ULI) Ireland hopes will be an annual opportunity for international best practice to inform the development of Irish cities.

The half day conference brings together international leaders in urban development, as well as domestic practitioners and policymakers, to discuss topics such as city governance, residential development and the rise of ‘smart’ cities.

The keynote speaker, Martin O’Malley, is of particular interest to those with an interest in current - and possibly future - US politics. O’Malley, a 54-year-old Democrat who ran unsuccessfully for the US Presidency last year, is a former governor of Maryland and Mayor of Baltimore.

The third generation Irishman, whose grandfather came from the Maam Valley, was an early champion of so called “smart” or digitally connected cities and is uniquely experienced in the nexus where city governance and urban development meet.

For the first time in history the majority of us live in cities. We are seeing the movement of people to cities and the growth of megacities

He is currently chair of the advisory council of MetroLab Network, a group of more than 35 city/university partnerships focused on bringing innovation to US city government. An Obama White House initiative, it was launched in recognition of the fact that more than 50 per cent of people worldwide now live in cities, a figure projected to grow to nearly 70 per cent by 2050.

The challenges cities face will continue to grow. This includes everything from sustainability and energy use to safety and effective service delivery.

MetroLab’s aim is to see researchers, public officials, citizens and companies work together to develop effective solutions to these challenges, enabled by technology such as cloud computing, smart phones, high-speed networks and data analytics.

As Mayor of Baltimore, O’Malley pioneered the use of data-driven decision making, introducing CitiStat, a performance based management system that produced dramatic improvements in city services and efficiency. The city was ultimately awarded an Innovation in Government award from the Kennedy School at Harvard in 2001, and CitiStat went on to become a model for cities across the US. In 2009, Governing Magazine named O’Malley Public Official of the Year.

“Whether it is more mobility, greater access to education and skills for its people, better commercial performance and opportunity or being more sustainable, smart cities become better governed,” he says. The emergence of two key technologies enables this. “First is our ability to model ‘belief space’ with probabilistic certainty and the second is the cloud.”

Already we are able to summon up an Uber and watch where it turns on our smart phones, or punch a destination into a SatNav and find our way somewhere, he explains.

“But what if point A and point B wasn’t a one dimensional path on a map, but was eradicating childhood hunger, or restoring water in an urban river system, or any one of the urban challenges now facing us?” he asks.

“We now have an ability to create modelling of dynamic things, from the environment to the built environment. The ability to uplink what might previously have seemed like countless bits of information, to inform that model, is a big deal. Smarter cities are figuring out how to make greatest use of that, whether it is sensors for air or water quality, the strength of a bridge, or the use of predictive analytics to target interactions in human services. All these are the new horizons of our cities, making them more dynamic, better governed and more performance-managed.”

The challenges currently facing Irish cities, from traffic congestion to affordable housing to the consequent issue of rural depopulation, are not unique, he points out.

“For the first time in history the majority of us live in cities. We are seeing the movement of people to cities and the growth of megacities. That’s a global phenomenon that is not going to be reversed. The challenges are pretty much the same around the world, it’s about the wellbeing of the people, their ability to get around and not be stuck in traffic five hours a day, it’s about affordable housing, it’s about ensuring cities are inclusive and the free market alone won’t provide that,” says O’Malley.

Internationally ULI has more than 40,000 members, the vast majority of which are individual rather than corporate.  ULI Ireland launched four years ago. As elsewhere, it offers a unique space in which to explore development issues, according to its chairperson John Bruder, who is also managing director of Burlington Real Estate.

“I’m a chartered surveyor by profession and have been in the property industry for more than 35 years. I’ve seen more than my fair share of industry cycles in that time.  What attracted me to the ULI is that it is not an industry representative or a lobby group but research and education driven. It is also a not-for-profit. As such, it is of relevance to a very broad church of businesses, individuals and organisations with a strong interest in the built environment. That makes it a very potent organisation in Ireland, where the property industry has not always enjoyed the best press, and often for good reason. For me the ULI is a way to rise above all that, in an open and inclusive way, to try figure out how to do things better.”

Other speakers at this year’s conference include Lean Doody, lead consultant on smart cities at ARUP, Marian Finnegan, chief economist and director of research at Cushman & Wakefield, Owen Keegan, CEO of Dublin City Council and Conor Skehan, chairman of the Housing Agency.

“Very few organisations can provide that safe environment for both public and private sector to meet up and learn from one another in order to try and find better ways to do things,” says Bruder.

ULI’s global network is a valuable resource too for Ireland. “Members in Ireland have a fantastic network to tap into in relation to what leaders in the realm of urban development have done elsewhere in the world. It offers plenty of instances where best in class projects, approaches and solutions have been tried and tested in other countries, where members can learn from people who have done all of these things. We can learn from their experience without having to reinvent the wheel.”

While the challenge facing cities is global, there are Irish peculiarities too to be considered. “Our medieval cities have grown and evolved over hundreds of years and were never designed to meet the demands of the 21st century. We have to look for innovative solutions and be willing to try things which we would not have considered 50 or even 20 years ago,” says ULI Ireland organiser Andrew Kinsella.

“We believe the timing is right to promote a national conversation on the future of Ireland's cities,” he says. “It's a good fit for ULI and something ULI members are passionate about. The conference will be of value to anyone with a commercial or professional interest in our cities and of value to ordinary citizens who have an interest in the future of Dublin, Cork, Limerick and Galway.”