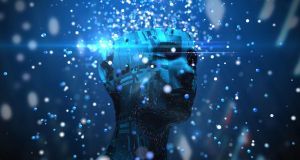 Each day an adult human makes about 35,000 decisions, from the mundane to life-changing. However, how does the human brain actually calculate the uncertainty underlying these decisions? Photograph: Getty / iStock

Researchers at Ulster University have published the results of their work on developing the first biological neural network model equipped with self-awareness, a form of metacognition. This breakthrough research could have important implications in providing insights into brain disorders related to distorted self-awareness, or the development of self-aware artificial intelligence (AI) machines.

The Intelligent Systems Research Centre (ISRC) at Ulster University’s Magee campus in Derry is the site of this pioneering research, which was recently published in the prestigious journal, Nature Communications.

For years, researchers at ISRC have been working on developing and applying biologically inspired algorithms that go beyond standard AI algorithms, leveraging the solutions nature provided to solving complex problems in computing and AI.

This includes utilising knowledge in brain sciences towards the development of superior and efficient computer algorithms or machines. The field of computational neuroscience helps to bridge these two areas of study by using computational models informed by biological features of the brain.

The model can replicate behavioural and brain activity data of humans and animals, seen in several previous studies. Overall, this computational brain modelling work is an unprecedented contribution to the field.

Dr. KongFatt Wong-Lin, a senior lecturer in the School of Computing, Engineering and Intelligent Systems, a member of the ISRC, and senior author of the published work, explains. “We make thousands of decisions every day, some of which are conscious, while others are seemingly automatic, such as driving your car. Every decision is accompanied by a level of confidence which requires self-awareness, however, it is unclear how the brain can perform such calculations. Lots of people have speculated about this, including philosophers,” he says.

“For the first time we have shown that we can create a neural network model, enhanced with some biological features, that can automatically detect in real-time when there is indecisiveness, giving us a degree of decision confidence or decision uncertainty,” Wong-Lin adds.

“For example, if you’re browsing two rather similar items in a shop but can’t decide which one you prefer, then you will have some internal conflict and therefore a very high level of decision uncertainty. When you have high decision uncertainty, studies have shown that certain parts of the brain’s activity increase, and our model was able to replicate that whilst also accounting for behaviour concerning choice.”

“We have developed a computational brain network model that can automatically detect indecisiveness on the fly, which may subsequently also lead to change-of-mind,” says Wong-Lin.

The research reveals the plausible brain circuit mechanisms underlying how we calculate decision uncertainty, which could in turn influence our actions, such as change-of-mind, he explains.

“In fact, this is the first time that a computational model unifies these two separate areas of research: decision confidence and change-of-mind.

“It’s not surprising when you think back about it, but we have clearly shown the relationship between decision uncertainty (or confidence) and change-of-mind. Importantly, when we used mathematical tools to analyse our network model, we showed that the mechanism of change-of-mind is due to the presence of a transient decision uncertainty-induced state which helps to override the initial decision,” he says.

This fundamental research will lead to many areas of application, not least in the field of AI. Wong-Lin and colleagues at Ulster University are now working with cognitive scientists and brain scientists to further validate and develop their computer model, while forming the early stage of developing conscious machines that are self-aware of their decisions and actions. This work could in turn make AI more intelligent and interpretable.

“Currently, the most popular type of AI algorithms, artificial neural networks (using black box algorithms), are being used to make important decisions, including medical diagnosis, and yet they are often difficult, if not impossible, to understand. There is no process as yet for identifying in real-time whether the algorithm was confident in the decision made.

“Now, we may potentially be able to glimpse into the black box algorithms and have some understanding of their inner workings,” says Wong-Lin.

Ultimately, this breakthrough technology could lead to the development of self-aware AI machines, or robots, equipped with higher forms of cognitions.

“In reality, that means we will know the level of confidence before the decision is made, which will allow the users to better trust the machines,” says Wong-Lin.

“Let’s take a self-driving car cruising suddenly into foggy condition. Due to the reduced visibility, the uncertainty level would be high and therefore it would be unable to make effective decisions. With algorithms similar to the one in the new model, controls could be put in place based on decision confidence level. For example the manufacturer could add an emergency signal for specific road conditions and automatically move the car to the side of the road - while explaining its decision to the passengers.”

For example, in some psychiatric disorders such as obsessive compulsive disorder, or addiction, there is dysfunction or distortion of a person’s self-awareness. This work could form the basis for studying distorted self-awareness, given our deeper understanding of metacognitive abilities.

For more information on our projects, or to collaborate with us, contact Ulster University at enquiry@ulster.ac.uk.