Our trip North: ‘I couldn’t believe how much it had changed’

Great value, fantastic sights and consistently high standards - tourists from the Irish Republic to Northern Ireland are being surprised at every turn 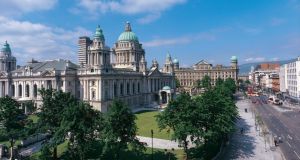 Most people in the Republic have already heard that the Northern Ireland tourist scene has changed dramatically but until you visit it’s hard to see just how good it is. The world-class museums, the rich local food and drink scene, the range of hotels and dramatic landscape all tell their own story. Awards have been won, records broken and an ever-growing number of repeat visitors. We asked three groups of tourists from the Republic to tell us about their trip to Northern Ireland.

THE DUBLINERS: Pauline and Pat McLaughlin

Despite both having studied at university there, it had been 15 years since Pauline and Pat McLaughlin had visited Belfast when they went on a short break this Spring. From the moment they walked in the door at the Europa Hotel they were glad they did.

“We got a lovely welcome. The staff simply couldn’t have been nicer,” says Pauline, a former nursery school teacher in her late 50s. Both she and Pat, a former president of Tallaght Institute of Technology, retired two years ago. “It’s just lovely to have the opportunity to travel,” says Pauline.

They drove from Dublin right to the front door of the storied city-centre hotel, where the valet service parked it for them as part of the package.

On their first night they visited two of Belfast’s most celebrated pubs, Kelly’s Cellars and the Crown Saloon. Next day they took a bus tour. “We already knew the city well but it was great to see places we didn’t know, like Titanic Belfast, where we had lunch. The best bit was a guided tour of Crumlin Road Gaol. The tour guide, Harry, was really entertaining and we found out loads about famous former inmates.”

That night they enjoyed a meal at Meat Locker, one of a number of restaurants owned by local chef Michael Deane, owner of the Michelin-star restaurant, Eipic. “But for us the most memorable meal was a special offer we got from one of the bus tour pamphlets for lunch at The Five Points Pub on the Dublin road in Belfast. For £3.50 we got a pint of Guinness and the most delicious Irish stew, it was terrific value.”

Last year the couple went on a short break to Northern Ireland’s northern coast, another first,  “which was just beautiful”, what struck them on both breaks was just how friendly everyone was. “Whether it was hotel staff or taxi drivers, people couldn’t have been nicer. We’ll have to think about where to go in Northern Ireland next.”

Our view on their trip: Belfast is fast becoming one of Europe’s most exciting cities, from its Michelin-starred restaurants and great nightlife to a phenomenal Titanic history. There’s a palpable buzz about the city and a fantastic line up things to see and do and places to visit. Crumlin Road Gaol dates back to 1845 and closed its doors as a working prison in 1996. After extensive renovations, the Gaol re-opened for public tours which recently received five-star status.

Farmer Nigel McHugh from Killeshandra in Cavan remembers visiting his aunts in the small village of Millisle on the coast above Strangford Lough in Co Down for a week every summer as a youngster. So when he, his wife Brigid and their 10-year-old daughter Isabella were planning a weekend break, they decided to revisit his childhood and head north.

Bangor was their first port of call, where they spent a happy Saturday afternoon “browsing and wandering”, he says. “It’s a lovely old seaside town with a Victorian vibe which we really enjoyed, so we stayed for a meal before heading on to Donaghadee, where we had booked to stay.”

He booked online and was pleased with the results. “We stayed in a two-up-two-down traditional house that had been completely modernised. It was really nice,” he says.

The town itself is very picturesque, with a little harbour and lighthouse. “While we were there we went out to dinner and a few drinks at Grace Neills, one of the oldest pubs in Ireland, and the food was lovely.”

Next day he took his trip down memory lane by stopping off at Millisle, before heading down the Ards peninsula. “It was just gorgeous. Every few miles you’d come around a bend and find another little beach or cove.”

Their drive took them past Portaferry. “All of a sudden the water runs alongside you like a fjord - when you get to the end, you take a seven-minute ferry trip across to Strangford, which saves 80 miles of driving.” From there the family drove on to Newcastle, another seaside town with a great beach.

After a night in a B&B there it was time for home, but with a promise to go back. “When you’re from Cavan and you’re thinking of the beach you’re used to either going west to Bundoran or east to Bettystown. You don’t think to go north, but that’s what we’re going to do next - maybe stay in one of the caravan parks we saw on the Ards Peninsula, because it was just so beautiful.”

Our view on their trip: Designated as an Area of Outstanding Natural Beauty, Strangford Lough combines stunning scenery and picturesque villages and towns. Stately homes and stunning gardens are prominent in the area, largely due to the sub-tropical micro-climate around the Strangford Lough area. Spend an afternoon at one of the two National Trust properties in the area also, Mount Stewart House and Gardens or Castle Ward.

THE MOTHER AND DAUGHTER: Anne Hyland and daughter Caragh

Anne Hyland was gifted a short break from her grown-up children. When the time came to take it, she and daughter Caragh drove to Belfast for a hotel package. “We stayed at the 10 Square Hotel on Donegall Square, which was really central and perfect for all the shops,” says Anne. Hospitality is something she has a keen interest in, as a former guest house and caravan park owner.

“What we couldn’t get over was the friendliness of the place, in every shop and restaurant we went into, staff seemed genuinely interested in us,” says Anne.

As part of the hotel package they went on a Black Cab tour of places like the Shankill and Falls roads. “It was fascinating to see all the murals, and to hear the background to it all from our taxi driver who was really interesting, entertaining and balanced,” she says.

A particular highlight was Titanic Belfast. “My father was born the day it went down so I’ve always had a fascination with it and it was terrific.” Having been given a list of restaurants to visit by a friend who lives in Belfast, the two did their best to visit as many as possible. “We did everything from Tex Mex to Chinese, but our favourite was Made in Belfast.”

They also hit the shops. “My legs were aching we walked that much but there was still so much we didn’t get to see.”

In many ways what was most enjoyable about the visit was how much the city had evolved in the 30 years since she last visited for a tourism conference. “I couldn’t believe how much it had changed. The whole trip was so enjoyable. Before I went people were saying it was so far away - but it’s only just up the road.”

Our view on their trip: For first-time visitors, what’s really exciting about Belfast is that you can experience first-hand the city where HMS Titanic was built and take the Titanic Experience - recently crowned the World’s Leading Tourist Attraction at the World Travel Awards - where you will be transported through nine galleries, each telling the story of the ship’s past. Most people will tell you that it’s worth the trip alone.

For lots more events and places to visit in Northern Ireland visit www.discovernorthernireland.com