From the lakes of Fermanagh to the mountains of Tyrone, there’s plenty of outdoor entertainment in these diverse, neighbouring counties of Northern Ireland 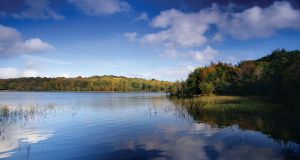 Fermanagh’s earliest settlers lived around the twin Upper and Lower lakes of Lough Erne, which cover a third of the county.

According to County Fermanagh legend, a graceful Lady of the Lake has been seen gliding through the mists and islands of the tranquil Lough Erne, carrying with her wild flowers and signifying good times ahead. But whether or not you spot the mythical maiden on your visit to this beautiful lake complex, you can be assured of a richly rewarding experience.

A trip to Fermanagh can easily be combined with a visit to neighbouring County Tyrone, where the wild and untouched Sperrin Mountains contrast starkly with the peaceful waters of Lough Erne. From fishing and watersports, to history and craftsmanship, there’s plenty to entice you to these diverse counties.

Fermanagh’s earliest settlers lived around the twin Upper and Lower lakes of Lough Erne, which cover a third of the county. You’ll see what are believed to be pagan stone idols on Boa Island, early Christian carvings on White Island, and the ruins of a key monastic settlement founded in the sixth century on Devenish Island. The lakelands can be explored on foot, by bicycle, kayak or even by luxury cruiser. A good place to finish a day’s exploring is the wooded Lusty Beg Island, whose Island Spa offers massages, facials and Irish seaweed baths.

The best known of Fermanagh’s extensive caves are the Marble Arch Caves. These limestone stuctures were undisturbed for thousands of years until 1895, when two explorers ventured, by candlelight, into the unknown. Today, they are considered one of Europe’s finest showcaves, and a guided tour of them takes in subterranean rivers, huge caverns, and a fascinating array of stalactites and stalagmites.

About 1km from the road entrance to Marble Arch is the Cuilcagh Mountain trail (pictured above). The wooden walkway, which was built to protect the blanket bog under foot, climbs up to the summit plateau and rewards with picturesque views.

Set on an island in the Fermanagh Lakelands, Enniskillen is just two hours and 15 minutes from Dublin, and a good base for exploring the surrounding area. It’s home to the seventeenth century Enniskillen Castle on the banks of the River Erne. This site, originally built on by the ruling Gaelic Maguires, now contains the Fermanagh County Museum and the Inniskillings Museum, which tells the story of Enniskillen’s two British Army regiments (the Royal Inniskilling Fusiliers and Royal Inniskilling Dragoon Guards).

At the other end of Lough Erne is the village of Belleek, home to Belleek Pottery. Its museum contains pieces dating back to the distinctive brand’s establishment in 1857. The factory tour shows visitors how techniques from more than 160 years ago, and tools from craftworkers’ forefathers, are still being used today.

In County Tyrone, the unspoilt Sperrins stretch from the Donegal border in the west, to Lough Neagh in the east. Designated as an area of outstanding natural beauty, the Sperrins can be explored on foot or via a series of scenic driving routes. In the southeast of the range, near Cookstown, you’ll find the Beaghmore Stone Circles. These Bronze Age ceremonial monuments were discovered during peat cutting in the last century and include a dozen small cairns which held cremation burials.

A trip to Tyrone isn’t complete without a stop at the Ulster American Folk Park, an immersive experience which follows the trail of thousands of emigrants from the thatched cottages of Ulster to the log cabins of the American Frontier. Along the way you’ll meet costumed characters bringing history to life, and imagine the emigrants’ passage on a full-scale sailing ship complete with creaking timbers and rough berths.

You’re guaranteed to get your adrenalin pumping with a trip to Todds Leap in County Tyrone. There are more than 100 acres of ‘mud-infested land’ as your playground, with activities including blindfold Land Rover driving, paintball and ziplining.

At the award-winning Watermill Restaurant in County Fermanagh, chef Pascal Brissaud serves up ‘Frirish’ cuisine – Irish food with a French twist – such as salmon fillet with a celeriac and leek fricassee, and a platter of local and French cheeses with tangy fruit chutney.

For a delicious meal in an atmospheric setting, try the Brewer’s House in Donaghmore, County Tyrone. The gastropub and restaurant is housed in an 18th century building and the herbs on the menu are sourced from its own vegetable garden.

With the current exchange rate, even the most luxurious of accommodation represents excellent value. The five-star, 120 room Lough Erne Resort in Co Fermanagh (pictured above), played host to 2013’s G8 summit. It is also home to two championship golf courses: the award-winning Faldo Course and the Castle Hume Golf Course, and a golf academy with state-of-the-art facilities. The resort’s Thai-themed spa also offers a Golfer’s Tonic treatment to soothe aching muscles. Rooms start at £55 per person sharing.

Another option with a stunning backdrop is the four-star Killyhevlin Lakeside Hotel and Lodges in Enniskillen. For those who don’t want to leave their pets at home, there are two pet-friendly bedrooms. There are also 14 self-catering lakeside lodges. Hotel rooms start at £45 per person sharing.