In the first in a new series called ‘The Story of Home’, in association with Ulster Bank, we meet Kildare designer Garvan de Bruir who has taken a very personal approach to the challenge of making his home (and workplace) his own

In a new series ‘The Story of Home’, in association with Ulster Bank, designer Garvan de Bruir talks about his studio-home in Kildare 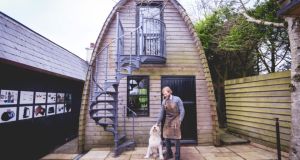 Garvan de Bruir outside one of the self-builds that make up his studio-home in Kildare. Photograph: Declan Devlin

Garvan de Bruir has built an extraordinary series of buildings as his home in Kildare town. Crafted on a narrow strip of land behind his parent’s house, he has forged a group of buildings that bring his home and work life intimately together.

They are a beautiful collection of properties that are under constant evolution as his passion for his work allows each building’s function to overflow into his home life. Built entirely of natural materials, he set out to create spaces that directly reflect his work as a designer and craftsman.

Having originally trained as an architect, de Bruir’s style as a designer is now forged from leather, conjuring incredible beauty from this strong pliable material. His trademark approach has pushed his design identity into what is often described as a masculine range of luggage, furniture and, more recently, fashion items that include leather jackets and ties.

Sitting in his main living space, a long kitchen-cum-sittingroom that has a bed tucked away out of sight, he talks with passion of the materials he uses and their efficiency. But he is also humble about the design philosophy behind them, claiming that many designers turn to nature for inspiration in their work. It’s a philosophy that allows him to bring simplicity to what he does, he says.

“If nature were creating a living space for humans it wouldn’t work to a rectangular box shape with four sides and a pointed roof,” he explains. “Nature would create a cocoon that protects, warms and is efficient in its energy use and has many functions. That’s all I’ve tried to do here,” he says.

He has certainly built a home that’s unique, but it has an unorthodox appearance. The light and shade inside his main living space is fantastic. It’s cast softly off the walls of the room and the large leather-topped table at its centre. But the materials of those walls aren’t covered or painted and this was a deliberate design decision that will have a niche appeal.

“Usually we’re very much encouraged to cover our building materials. We put chalk-board and paint and wallpaper between us and the materials we use to hide them. I wanted to celebrate the wood I used in this building.” That wood is a type of chipboard material called OSB (oriented strand board) available relatively cheaply and produced in Ireland. It’s a great material to live within, he says.

He describes how it holds the heat from his stove incredibly well and radiates it back almost immediately. The wood is warmed from the sun outside in a really natural way also, he explains, and having used a lot of insulation the building is really very heat efficient. It stands on stilts on a strip of land that was previously considered of little use so the creation of this main living space with its curved roof and all wood construction is a small triumph in using small spaces.

In the kitchen the same wood is used in his kitchen cupboards as on the walls but the hinges are simple pieces of leather, held in place by six metal studs. They are ridiculously simple in their construction but very sophisticated in their use, operating just as well as any plastic and metal hinge we might have in our homes.

Leather is used like this throughout, as wine bottle holders, containers and heavy drapes that are held open by rolls of more of that same leather. As society rushes forward to constantly modernise we’re in danger of losing a lot of the skill of older crafts he says, as he runs his hand across his leather-topped dining table.

“It’s such a strong material. It can be soft and pliable but also can be used as if it is a wood, holding rivets and be multi-layered. I use the leather on this table just like it’s an old farmhouse table made of wood. I let cups burn it and liquids stain it. It’s robust and becomes stronger and more attractive with age.”

Aging matters in de Bruir’s work. Everything he builds he designs to last he says, letting him imagine it being passed on to a future generation. He takes a satchel in his hand and traces the shape of the single piece of leather that it is forged from, outlining the reason why it matters that it is designed this way.
It’s not cut into single sections and pieced together in the way that a mass-produced bag might be. It’s crafted to be shaped and functions in the way that leather does naturally. It folds and holds its shape as a bag according to the natural fibres of the material. And this is crucial to de Bruir, he says.

His buildings have curved roofs, two of them internally like the underside of a boat, the wooden rafters meeting at the apex as if they are one single piece. It seems to be a wonderfully calming and comfortable space to live and work in. But it’s not for everyone. He’s lucky to have had the land to build on, he says. Most people fit their lives inside more conventional builds in urban areas and design their homes to work with that. It’s that challenge of making a place your own - you succeed by working with what you have, he suggests.

These days de Bruir has his mind set on the next stage of his home build. He has found a nearby site with an unusual, possibly awkward footprint on which he hopes to build the next stage of his home. “I need to think practically about how it will be used, how my life might change in the future and design for that. I also need more workspace so I expect to see my workshop breaking through into this room and my living area moving to the new building. It’s a constant evolution.”

About The Story of Home series

The Story of Home is a six-part weekly print, video and online editorial series, in association with Ulster Bank, that explores the idea of home through the eyes and work of six inspiring Irish designers.

We are all writing our own story of home and, to help inspire you, we’ve turned to a group of people who have made design for the home the core of what they do.

As well as Garvan de Bruir, the series will also include the stories of Jennifer Slattery, Shane Holland and Orla Reynolds, among others. One of the first steps in creating your own story of home is getting a mortgage and, according to Debbie Boyle, a mobile mortgage manager with Ulster Bank: “In this series we want people to consider the design of their homes at the very earliest stage, like Garvan de Bruir, so that we can help them build a home that reflects their own story perfectly.

“We want to make that process as easy as possible and provide the ‘help for what matters’ at this time in their lives. Our customers have busy lives and I know from talking to them that they want flexible
arrangements that match their lifestyles.

“We now open branches on Saturday mornings and Thursday evenings for example, or our mobile mortgage managers can meet you in your home or office. We can even do this by video chat if it makes life easier.

“We want to help you start your Story of Home.”