The Story of Home, in association with Ulster Bank, travels to Killarney to meet furniture designer Tricia Harris 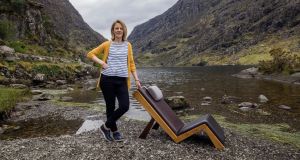 Furniture designer Tricia Harris with her chair the Lazy Lounger in The Gap of Dunloe, Killarney. Photograph: Don MacMonagle 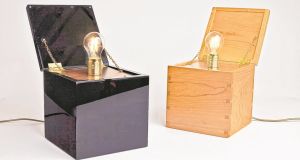 The Jack in the Box lamp

Despite the wilds of Kerry dominating the landscape of her youth, its influence doesn’t often make it into the strong bold shapes that define the furniture that Tricia Harris creates. She works primarily in wood to create pieces that are bold and surprising and while there is often a sense of nature in the unexpected curves and turns of wood she crafts, she seeks to put a much more practical energy into her designs.

The sharp lines and delicate finishes belie the invention that is at the heart of each piece and she says she loves to watch people come upon her work for the first time as they discover the function she has carefully woven into each piece. Based in Dublin, where her studio and shop in the city’s Chocolate Factory is her base, she is most creative in her family home in Killarney. The calm of the hills and lakes that surround it create what she describes as an almost meditative space for her to work and simply make.

“I think you have to leave a place to truly appreciate its beauty,” she says as she looks out across the Killarney lakes from her parent’s home outside the town. “Killarney is a great place to grow up, surrounded as it is with so much natural beauty. The lakes, the mountains, the Gap of Dunloe. I love to work here,” she explains. “It’s peaceful and there’s space to think and design. It’s a refreshing change from life in Dublin.”

She has become a designer, she says, but at heart she is always a maker and, while her career trajectory now sees her handing over this part of her work to manufacturers, she is always drawn back to the workshop.

Her first workshop was in her father’s shed when, as a teenager, she would disappear for days on end. Her eyes lowered to the job in hand she would emerge, she says, when it was time to eat, with what her mother would describe as “that glint in her eye that says there’s a project in progress.”

Harris loves the luxury of bespoke hand-made design. She hopes to create pieces that become heirlooms and while being attractive to look at serve a very practical purpose too.

She has a surprising position about the emergence of big retail design brands like Ikea who have come to dominate furniture sales here. Rather than see them as a threat she celebrates the design education they have brought to Ireland. “Instead of the poorly-made drab flat-pack furniture we used to buy you can go up to a shop like Ikea and buy a really well-designed, well-considered piece that is attractive and will work in your home. Buyers are being introduced to a sense of design and that’s a great thing. Consequently there’s a push back against the so-called throwaway society. People are starting to buy less but buy better.”

Some of those people will go on to buy handmade Irish design in the future and their homes will benefit, she says. People are happy to mix pieces too, she suggests. “They’re more design aware and will buy a piece because it is well made and will last and become something that can be handed down to the next generation. Often they are realising too that custom-made doesn’t necessarily mean it is more expensive.”

It’s a positive spin on an unstoppable march forward by international design brands.

Harris demonstrates a confidence in her work that is refreshing. Two of her best-known pieces are based on designs that came to her while studying at the Letterfrack furniture design college in Connemara. The Lazy Lounger emerged from a project where she set about creating a chair “just for me. Something that would allow me to look at the view or just relax. I set out to create something that didn’t have to be just four legs and a back and that design has been successful for me.”

She has updated it since and offers it with different finishes but the central design remains the one that she discovered in Letterfrack. Similarly with her Jack-in-the-Box lamps: these elegant and surprising desk lamps emerged from an initial design that she created during her first year in college.

Simple in their function they have a complicated construction, housing a bulb that moves out of the box like a Jack-in-the-Box as the lid is lifted. The prototype design has evolved into a range that is polished and impressive.

Letterfrack was a great experience and a great place to learn, she says. It’s such a wild and beautiful place and remote from everywhere else and this creates a really strong sense of community, she continues.

Community is at the heart of where her thinking around home lies. “People go through different stages in their idea of what a home is: from it being simply a house as a child, to being about the town you are from when you leave it. Then the country you’re from when you go abroad – but ultimately our attention comes back to a physical home again and we need to reimagine that.”

With so much urban sprawl we need to think again about living in more vertical spaces and living with more shared spaces, she says. In Letterfrack and in her studio in the Chocolate Factory in Dublin, shared creative spaces have generated great diversity and creativity in how people live.

“I think we need to be less individualistic about how we live and who we live with. Younger and older people could share spaces in a really healthy way if we’re creative about it. Ireland is such a creative place and we should bring this creativity into our homes.”

About the Story of Home series

The Story of Home, in association with Ulster Bank, is a six-part weekly print, video and online editorial series that explores the idea of home through the eyes and work of Irish designers.

We are all writing our own Story of Home and, to help inspire you, we’ve turned to a group of people who have made design for the home the core of what they do.

“We aim to take the stress out of the process by being available to meet people at a time and place where they feel totally at ease.”

Byrne says he regularly meets clients at their kitchen table or wherever they feel most at home and the outcome is usually a warm and fruitful conversation. A mortgage application should never be a chore, he says.

“My role is to make it as easy as possible and this goes way beyond completing a few forms.

“What is particularly enjoyable is that I manage the process right through to completion of the purchase of that dream home and get to hear the lovely sound of keys jingling on that very special first day in your new home.”