Do you know how much you’ll save by switching health plan?

Sponsored by The Health Insurance Authority 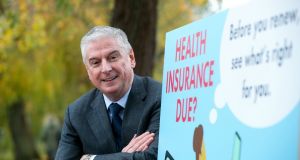 Hundreds of thousands of people in Ireland could be paying way over the odds for their health insurance because they don’t shop around when their plans come up for renewal. That’s the message from the Health Insurance Authority which is advising policy holders to check their current plan to ensure they are getting value for money from their health insurance cover.

The Authority has launched an advertising campaign with the message “Before you renew, see what’s right for you” to encourage policy holders to actively review their current health insurance cover and get information on plans and prices before they renew policies for 2017.

“With average premiums in 2016 at €1,174 per person, health insurance is a significant annual cost for many families,” says Health Insurance Authority chief executive Don Gallagher. “One of the ways in which health insurers compete is by targeting different demographic groups of consumers with insurance plans at different levels of cover. In our community-rated health insurance market any customer, irrespective of age or health status, is entitled to avail of any plan offered by any insurance provider.”

The community-rated health insurance market effectively means that people are not penalised because of their age or state of health when it comes to insurance costs. However, it is clearly more profitable for companies to target younger lower-risk age groups when designing health insurance products. This means that people should pay particular attention to their renewals to ensure that their plan still meets their particular needs.

“The range of insurance plans on offer is changing and becoming more competitive all the time,” Gallagher explains. “Personal and family circumstances also change and this can change the level or type of health insurance needed. Someone who hasn’t reviewed their level of cover, and the price they are paying, in the last three years is unlikely to be getting the best value they can for the cover they need. Switching health insurance product or provider is a very straightforward and easy process. Also, people should know that there is no additional waiting period for cover to take effect when someone switches their health insurance to another provider for a similar level of cover.”

Despite the clear benefits of shopping around, research conducted on behalf of the HIA in 2015 revealed a fairly low-level of switching. Just 24 per cent of policy holders have switched provider at any time since taking out private health insurance. For those that have switched, the main reasons given were cost savings (65 per cent) and the level of cover available (23 per cent).  Seventy per cent have made no change in the level of cover they have in the previous two years, and 80 per cent had no plans to change their cover in the next 12 months.

“People tend to be fearful of change even though they might not know what they’ve got in their current plan in the first place,” Gallagher points out.

He also notes that Irish people are quite attached to health insurance. “The statistics show that in 2008 2.3 million Irish people had private health insurance. Despite the recession that only dropped to 2 million and is now back at 2.1 million. People might go to a basic plan but won’t drop it altogether. There is a fear of the unknown; it’s all about peace of mind. People want to know that if they or their loved ones have a medical emergency that they will receive the best possible care at a reasonable cost.”

But overcoming resistance to change could pay handsome dividends.

For example, a family of two adults and two children, with a plan that provides public hospital cover, a semi-private room in a private hospital and day-to-day benefits paying roughly €4,500 could reduce their premium to €3,000 if they moved to a plan with a €150 hospital excess, that’s a saving of 33 per cent for a very small change in benefits.

Similarly, a single person in their 30s with a plan that provides public hospital cover and a semi-private room in a private hospital could reduce their premium from around €1,400 to €1,150 by just switching insurer to save almost 18 per cent, or to save 35 per cent by increasing the excess from €125 to €250, bringing their premium down to €900.

“Increasing the excess amount is a form of self-insurance,” Gallagher explains. “If people indicate that they are willing to pay an element of the bill the insurance companies will view them as a lower risk and charge a reduced premium. More people should consider this as a means of lowering their health insurance bills.”

He is keen to dispel one of the myths which has grown up around health insurance and that is the notion that risk equalisation rules are somehow driving up the cost. Risk equalisation is intended to ensure that insurers with the highest-risk customers are not penalised as a result. It works by collecting a levy on every health insurance policy – currently €403 but due to increase to €444 from April 2017 – and then distributing this to the insurance companies in direct proportion to the risk they bear.

“This year the levy will total €650 million out of a total market of €2.4 billion and 100 per cent of that will be transferred back to the insurers,” says Gallagher.

“The insurers who are net contributors as a result of the levy will claim it is too high while the beneficiaries will say it is too low,” says Gallagher. “That is only natural but we believe the system works quite well.”

When it comes to shopping around for the best value, Gallagher advises people to consider the level of health insurance cover they need for themselves and their families, the cover they have under their existing policy and how much they are paying. “They should then check to see what else is available from their current health insurer and from the other insurers and be prepared to switch plan or provider to secure savings and get better value.