Monica Lewinsky: ‘We are all so much stronger than we can ever imagine’

In this extract ahead of her keynote at Talent Summit 2019, Monica Lewinsky considers cyberbullying, unwanted fame and human resilience 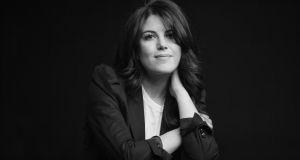 Monica Lewinsky: ‘We need to frame the human stories on either side of cyberbullying, to strip away the screens and digital posturing and create a narrative steeped in empathy.’ Photograph: Damon Winter / New York Times

Monica Lewinsky is a keynote speaker at Dublin's Talent Summit 2019. The event has become one of the most respected talent conferences in Europe – perhaps because of its mission to create better working lives in the changing nature of work. This year’s theme is “The Talent Revolution: Leading Change”. It’s about people as the future of work and the driving force behind activating that change, for better or worse. The conference will explore the working world through traits that are uniquely human on one hand and technological on the other.

Monica Lewinsky’s story, in many ways, reflects this juxtaposition of humanity and technology. In this extract from the foreword to Shame Nation she outlines how we need to frame the human stories on either side of cyberbullying and create a narrative steeped in empathy.

In 1998, when I first became the subject of worldwide shaming, few people could imagine how that would feel – or what the long shadow of consequences could look like. Back then, literally overnight, I went from a completely private person whose world was family, friends and co-workers to a globally known figure, relentlessly mocked and vilified. I stepped (or was pushed, really) from a comfortable, anonymous existence into a maelstrom of wild rumours and cruel jokes. And the nascent internet played an important role in that storm. In fact, the report that launched this story first broke online in one of the very first online news blogs. All of this was unchartered territory, where there was no rules and no boundaries.

As an advocate who has travelled all over the world speaking about this issue, I have had the vantage point of hearing from countless people about their struggles on this topic. Today, sadly, many people can identify with my experiences of being shamed by millions of people – millions of strangers; 38 per cent of adults confirm they have been cyberbullied in the last year. And those numbers are continuously increasing.

Tragically we have come to a point where we needed to coin a new word – bullycide – to adequately describe the onslaught of suicides, especially among young people and children.

In 2014, after a decade long self-imposed retreat from public life, I authored an essay for Vanity Fair titled “Shame and Survival”. In it I reflected:

No one, it seems, can escape the unforgiving gaze of the internet, where gossip, half truths, and lies take root and fester. We have created, to borrow a term from historian Nicolaus Mills, a “culture of humiliation” that not only encourages and revels in Schadenfreude but also rewards those who humiliate others; from the ranks of the paparazzi to the gossip bloggers, the late-night comedians, and the web “entrepreneurs” who profit from clandestine videos.

Yes, we’re all connected now. We can tweet a revolution in the streets or chronicle achievements big and small. But we’re also caught in a feedback loop of defame and shame, one in which we have become both perpertrators and victims. We may not have become a crueller society – although it sure feels as if we have – but the internet has seismically shifted the tone of our interactions. The ease, the speed, and the distance that our technology affords us can also make us colder, more glib, and less concerned about the consequences of our pranks and prejudice. Having lived humiliation in the most intimate possible way, I marvel at how willingly we have all signed on to this new way of being.

Shame culture doesn't make value-judgements on one's actions, but instead, more insidiously, it tells people that they, as human beings, are unworthy

There is, painfully, a sad lack of empathy and compassion in our cyberworld. People rush to make rude and (sometimes) violent commentary they would never utter in a face-to-face situation. These insults and threats never go away, living inthe internet ether forever, they are easily accessible to potential employers, potential relationships, and anyone in the mood to do a Google search.

But society is slowly acclimatising to this “brave new world”. Gradually we are developing new methods for coping with online harassment and curbing cyberbullying and shaming in all forms. These include legal recourse against the perpetrators as well as counselling and support for those victimized by online harassment.

Activist and support groups have sprung up globally. The concept of digital resilience has been appropriated in this space to look at ways our social behaviour and emotional responses can be reshaped so that we – especially young people – are able to bounce back when cyberbullying and online harassment occur. But ultimately, as a society we can – and must – do better to help protect others online, be mindful of our own clicking behaviour, and remember compassion. As an advocate in the antibullying space, I think I summed up my thoughts best in an interview with Guy Raz for NPR’s TED Radio Hour on why I ultimately have so much faith in our ability to make progress:

‘The most important thing that I’ve learned is that we are all so much stronger and so much more resilient than we can ever imagine. I think it’s so important for people to understand that. It doesn’t matter what your experiences of struggle or level of trauma is. We are more resilient, and have a well of compassion for others and ourselves, which can help us bounce back from any kind of situation.’

Shame culture doesn’t make value-judgments on one’s actions, but instead, more insidiously, it tells people that they, as human beings, are unworthy. We need to frame the human stories on either side of cyberbullying, to strip away the screens and digital posturing and create a narrative steeped in empathy. Let’s begin . . .

Excerpt taken from the foreword for Shame Nation by Sue Scheff