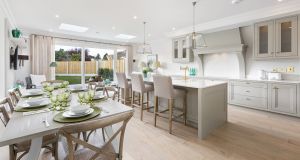 Ask leading interior designer Helen Turkington where most new housing schemes fall down, and she’s got a quick answer. “The developers’ time gets so taken up with planning issues, building schedules and architectural specs, that the design mechanisms of how a house will actually work for those living in it and the practicalities of creating a functional interior space are often left too late in the game,” Turkington states.

“That makes it really hard to backtrack on simple structural decisions, that could have made the space so much more liveable for the owners,” she adds.

Their latest development is Stone Park, a small, well-manicured enclave of just seven luxury family homes. Sure to attract families looking for premium turnkey residences, it consists of three four-bedroom semi-detached houses, all 1,819 sq ft, an exceptionally large three-bedroom house, also at 1,819 sq ft, and two three-bedroom duplexes at 1,399 and 1,318 sq ft. There is also one sizeable ground floor three-bedroom apartment at 1,649 sq ft, with its own private garden.

Stone Park combines an exceptional specification with many considered touches from its expert development team.

“I got stuck into the final details from the start of the build,” says Turkington. She had a long list of non-negotiables, including, “9ft high ceilings to give a sense of volume and space”. It has worked: the homes feel large and roomy.

“Proper utility rooms with plenty of storage, a place for everything – including washing powder – and nooks to stow away baskets of dirty laundry”, were also on Turkington’s list. Utilities also feature a washing machine and tumble dryer.

Classic painted kitchens feature quartz worktops and there is a generous Miele appliance package. Luxurious extras come as standard too, such as the brass hardware and mixer tap in the kitchen.

Contemporary bathrooms feature high-quality tiles and stylish chrome fittings and towel rails. Double vanity units and twin sinks in the master bedroom were also a must, as was a large bath and shower. Pressurised shower systems are fitted in the en suites with a mixer tap and hose in baths.

Light engineered beech flooring, in a wide plank, runs throughout. This automatically gives a more spacious feel according to Turkington. Soft neutral paint shades are featured in the homes, with plaster cornicing details in the living room, kitchen and hallway.

Extra high, custom made doors feature on the ground floor to complement the ceilings, and homes feature high-quality joinery throughout. Karl Cullen Fitted Furniture in Wexford can take the credit for the bespoke wall panelling, beautifully crafted closets and the Hamptons-worthy hardwood kitchens.

“We designed these with lots of foresight as to how people actually live today and there are lots of functional extras like concealed pantries in the kitchen, or a place to store a hairdryer in in the closet,” Turkington says.

Thoughtful design has made for homes that are supremely liveable. “When I initially walked through the shells of the houses, I requested walls be moved so the spaces would be put to better use – shaving a foot or two off the hallway meant we got a better sized family bathroom, and added a few more feet to the master bedroom, which meant more space for the walk-through closets,” explains Turkington.

The electrical specification in Stone Park was also carefully considered. “It drives me nuts when sockets are in the wrong places or when houses are not pre-wired for intruder alarms and multiple TV/broadband zones – anyone with kids or for the throngs of us now working from home 24/7, will know how vital these are,” Turkington points out.

“I made sure they are in all the right places and I was adamant there was a place to charge a phone by the bed and couch or in the kitchen. I’m also a stickler for good, flattering lighting especially in the dressing areas and the bathrooms, so all the lighting schemes are five star hotel standard. I really believe it’s the little things in our home that make a difference to how we experience living in our environments every day,” she says.

Comfort and security are top of mind here. Homes are A3-rated, featuring Rationel alu-clad windows, excellent levels of insulation to walls, floors and roof as well as an innovative A-class air-to-water heating system, which provides energy-efficient hot water and central heating. The ground floor features underfloor heating, and the heating system on each floor can be thermostatically controlled using wall-mounted controllers.

Outside, all homes boast large rear south east facing gardens, some up to 60 feet in length. Landscaped gardens and cobble lock driveways feature to the front.

Located on the settled and aptly named Trees Road, right in the heart of leafy Mount Merrion, new owners can look forward to becoming part of this long established and closely-knit community, which is within proximity of some of South Dublin’s finest schools including Blackrock College, Mount Anville Schools, Oatlands College, Loretto Foxrock and many others.

Bustling Stillorgan village with its many shopping and leisure facilities, bars and restaurants is a stroll away as are UCD Belfield and Deer Park. The M50 and city centre are equally accessible and Sandyford Business Park, Dundrum Town Centre and Blackrock village are also nearby.

Above all Stone Park offers owners a chance to be part of a new chapter in Irish housing, one in which the intricacies of day-to-day living in a home are not an afterthought. Rather, they are at the forefront of the brief.

To book an appointment to view Stone Park, contact Ed Dempsey & Associates on 01 288 0004, or visit www.eddempsey.ie