Wild waters: the lesser-known life of whales and dolphins along the Irish coastline

Pádraig Whooley is sightings co-ordinator for the Irish Whale and Dolphin Group. Here, he selects five images from the IWDG archive that reveal the abundance of life just beyond our reach in Irish waters 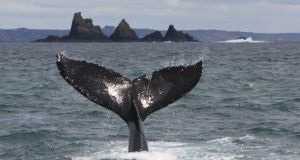 The tail fluke of a humpback whale near the Stags off the coast of west Cork. Photograph: Pádraig Whooley

Rural Ireland expresses its identity through the natural beauty of its landscape. It may be a mountain ridge, a stunning skyline or a discrete and understated piece of wildlife. The Irish landscape is incredibly well documented and people travel from every corner of the earth to experience it.

But what about our waters? What do we really know of the ocean and sea that surround us? Pádraig Whooley has spent decades documenting the wildlife of the Irish Sea and the Atlantic Ocean and, in particular, their most intriguing dwellers: whales and dolphins.

Whooley (pictured) is the Irish Whale and Dolphin Group’s sighting co-ordinator, his involvement going back to the group’s first public meeting in 1992. He has travelled extensively in search of whales and dolphins and spent many years carrying out systematic land-based watches in search of whales and dolphins in Irish waters and this body of work highlights the importance of the south coast of Ireland as a rich and vibrant feeding ground for large whales, such as fin and humpback whales.

He continues this surveillance work through the IWDG Large Whale Project, curating the Irish Large Whale Photo ID catalogues, which contribute to the global understanding of these magnificent creatures. Whooley is an advocate of sustainable whale watching in Ireland and delivers IWDG whale watching courses on Cape Clear Island in Cork, as well as contributing to natural history publications and wildlife documentaries.

“It’s wonderful to know we live in a country where our most interesting wildlife is our marine wildlife,” he says. “The south and south western coasts, along the Atlantic fringe, are brimming with incredible wildlife.”

“This photo wasn’t actually taken by me. It was the Irish Air Corps who thankfully worked with us when we contacted them. Members of the IWDG were on the Celtic Mist, on their research boat, about 100 kilometers or so off the Porcupine Seabite.

"The researchers woke up to the sound of the whales blowing and came out to see them about 100 meters away. They contacted the Air Corps, as they knew they were in the general area. Looking at the photograph, it would have been great to get a wider span so you could see the research boat, just to add a bit of scale to show how large they are. These are such iconic animals, one of the most iconic in the world. You have to go out very far to find them. So it was really special to get such a brilliant image of them.”

“These are the most frequently observed cetaceans in the south and southwest. You’ll find them here almost 12 months of the year. This picture was taken off the coast of west Cork, near Kerry. It’s great when you come across common dolphins in a boat; they ‘bow ride’ alongside the boat, which gives you a great opportunity to get a side-on shot.

"Normally with marine animals you’re shooting them from above, but when these dolphins jump up alongside you, you have an opportunity to shoot the face, and see the eyes, which really gives them a sense of character. They’re very accommodating for researchers in that way.

“Fin whales are the second largest species of whale and in fact creature on the planet. They can be up to 23-meters long. What’s amazing is how incredibly fast they are; you get a bit of a sense of that speed in this image, with the whips of the water alongside them. Old sea men called them ‘the greyhounds of the sea’.

"And they come in incredibly close to shore. You can see Youghal in east Cork in the background. Anyone there would have had a brilliant view, with binoculars, of those whales. It’s the best way to see fin whales, from the shore. Fin whales are fairly common to Irish waters. You can see them all along the south, even going as far up the coast as Wexford. And you’d find them all the way from summer to autumn or mid-winter.”

“This was just of the Skelligs in west Kerry, which is the best place to see humpbacks in recent years. It’s a real experience to see as they have such an extensive behavioral repertoire; they’re quite gregarious animals. And it’s great because sightings are increasing here in Ireland. It was once very rare to see them.

"We can identify individuals by their tails, and we now have a catalogue of 78 individuals that we recognise in Irish waters. Because they’re creatures of habit we’re seeing individuals return year after year. Marine tourism is increasing as a result; people want a real experience, and Ireland is well situated to accommodate such tourism. Irish waters are being sought out as rich feeding grounds, and so there is a conservation threat. It’s important not to over fish and threaten their food supply of sprat or sand eels and herring. If that happens, they’re likely to leave.”

“These are the most widespread of all dolphins. They are actually dolphins, not whales. You can tell because they have a central dorsal fin. Whales’ dorsal fins are further down their back. I went to British Columbia 20 years ago to see killer whales, because they’re so hard to find. I was amazed when I came back here to find them. Sightings of any kind of apex predator are very rare. You might see one every couple of years if you’re out searching every day.

“There’s a group of killer whales that go between here and Scotland and we’ve seen them a few times. Actually, in 2001 a family of three essentially moved in by Cork harbour for the summer and autumn. Thousands of people saw them. But ultimately they’re just passing through Irish waters. We get about 12 reported validated sightings per year, but there’s huge scope for confusion. It’s only the adult bulls that have the recognisable dorsal fin, and so many people confuse their sighting with another dolphin species, the Risso’s.”

Reporting sightings and strandings are incredibly important to the conservation and understanding of these animals in Irish waters. There are hundreds of citizen scientists that report sightings via the IWDG website (iwdg.ie), which supports their recording scheme. This is divided into two areas: the sighting scheme and the stranding scheme.

Reported sightings are validated by the IWDG, giving value and meaning to every sighting reported. Anyone interested in getting involved is encouraged to join the IWDG and give a greater voice to influence conservation and protect these beautiful animals in our waters.

SSE Airtricity: Together we can power a greener Ireland

Join SSE Airtricity and get 10 per cent off electricity and gas, plus up to €180 credit. See www.sseairtricity.com/ie/home/products/electricity-and-gas/ for more information.