‘Learning and earning’ a big pull factor for young adults and job changers, while grants offer incentive to employers 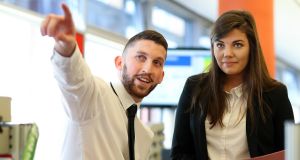 Ireland lags behind its European neighbours when it comes to apprentice uptake.

In just a few short months, the jobs market has changed dramatically – and perhaps even irrevocably. Those seeking to continue their education or considering a post-Covid career change are now being encouraged to consider an apprenticeship, where study and work experience are combined to provide the apprentice with a defined path to their chosen career.

Minister for Further and Higher Education, Simon Harris recently came out in support of apprenticeships, decrying the “obsession” he said persisted around “funnelling” students from the Leaving Certificate to university.

“We want apprenticeships to be seen as a real way of getting a career you may wish for,” says Harris.

That career could be any of the 56 different apprenticeships that are on offer across the education sector. More than 18,000 people are currently undertaking an apprenticeship in one of a diverse array of occupations, including healthcare, construction, horticulture, engineering, and finance.

Maria Walshe, acting director of communications at Solas, says the conversation around apprenticeships has changed, “the ship is turning”. There is, she agrees, still work to do in communicating the sheer breadth of opportunities this pathway offers, which many people simply aren’t aware of.

While the craft apprenticeships such as plumbing, electrical, and motor mechanics, are more popular than ever with registration figures increasing consistently, over the last four years, apprenticeships have undergone a significant expansion programme across 13 different sectors including engineering, construction, IT, logistics, and sales, finance, biopharma, and property services are just some of the newer offerings, with more being added .

The damage wrought on the labour market by Covid-19 has had a savage and disproportionate impact on young adults. Apprenticeships thus provide an opportunity to follow a defined career path, “learning and earning” at the same time.

An attractive incentive for employers was offered by the Government via the Apprenticeship Incentivisation Scheme, announced in the July stimulus and extended in the recent Budget, which offers financial support to businesses willing to take on an apprentice. Employers who register a new apprentice before June 2021 receive a grant of €2,000, with an additional €1,000 for every apprentice retained.

Employers are key to the success of the national apprenticeship scheme, Walshe says. “An apprenticeship starts with a contract of employment with an employer. The apprentice will then be working with that employer on the job, learning the skills of the trade. There is also an off-the-job element where the apprentice is in a learning environment, be that in a training centre, college or online.”

As apprenticeships are aligned to particular careers, they offer a unique opportunity to both learn and train on the job, Walshe explains.

“Apprenticeship gives the opportunity to study and gain experience whilst in a job. You finish an apprenticeship ready to work in a particular job. It’s unique for an education route, you are learning for a specific career.”

According to Walshe, apprenticeships now “transcend” both further education and high education, with many third-level institutions getting in on the act. For example, University of Limerick has introduced an apprenticeship programme that offers a level 10 doctorate in engineering after four years. The National College of Ireland also offers several apprenticeships in financial services such as insurance, while a number of level eight honours degree apprenticeships are also available.

“It’s not about just having something to do if you don’t get into college,” Walshe says. Indeed, an apprenticeship offers much in the way of employability, she adds, saying “for example with the Insurance Practitioner Apprenticeship you come out at the end not only with an honours degree, but you also have three years’ work experience.”

School leavers, traditionally steered towards third-level education, are now being actively encouraged to consider apprenticeships as a viable post-secondary option, and Walshe says Solas has worked closely with the Institute of Guidance Counsellors to ensure the apprenticeship route is adequately communicated to those approaching their Leaving Certificate.

Apprenticeships shouldn’t be pitched against third-level, Walshe stresses. “What we want is when parents are having those discussions around the kitchen table that they look at all the options and not focus on one particular route - there are multiple routes now. It’s not about whether it is further or higher education, you can achieve both of those.”

Indeed, this type of learning will suit many would-be students better, she adds. “Some people do better in this mixed environment with the hands-on experience coupled with the education piece.”

But it’s not just school-leavers who are increasingly drawn to apprenticeships. A significant proportion of apprentices will be those seeking a career change, and this decision may have been catalysed by the coronavirus pandemic, says Walshe. “So many sectors have been badly hit, and a lot of people may be considering a possible career change, or maybe see it as the chance to switch career into something they truly love.”

You can find out more about the options available at www.apprenticeship.ie