Enter the dark and dazzling world of Patrick Melrose 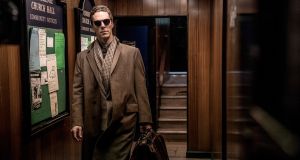 Benedict Cumberbatch on playing Patrick Melrose: ‘The hardest task was containing that amount of hurt and pain, having to go to a place where that was coursing through his veins’

If you haven’t read the books by Edward St Aubyn, the blistering trailer for Sky’s new original production Patrick Melrose will leave you in no doubt that this is a tale like no other. “Trainspotting for the aristocracy” goes some way to describing this new drama, but even that still falls short – this is a unique and original story.

Taking on the eponymous role for the silver screen is Benedict Cumberbatch, and from the get-go it’s clear the character could be played by no other – Cumberbatch’s caustic English wit and impeccable timing makes him utterly watchable, as he masterfully depicts a man whose life is falling apart due to a horrific and abusive childhood at the hands of his monstrous father and complicit mother.

As the showbiz fable goes, Cumberbatch once named the character of Patrick Melrose as the one he would most like to play having read the “extraordinary” books; the dark but dazzling drug addict at its core is a meaty role he was thrilled to finally get his teeth into.

“The appeal of the character through those shifts from an innocent child, to a terrified, self-destructive 20-year-old to a sober thirtysomething to a husband and father – to an orphan . . . what a great canvas to play with,” explains the Oscar-nominated actor. “He’s addicted to drugs and near suicidal, but also incredibly funny and brilliant.”

Indeed, the laughs are frequent, but this is essentially a tragicomedy of Grecian proportions – the books cover mental illness, suicide, abuse and addiction and the adaptation does not shy away from depicting each of these in their most raw form.

Cumberbatch (who worked closely with former addicts to perfect his “shooting-up” technique) admits he often found tackling the dark subject matter difficult and says there were a couple of “weird days at the office”. “The hardest task was containing that amount of hurt and pain, having to go to a place where that was coursing through his veins and tipping him towards chaotic, self-destructive behaviour.”

This is not a series to dip in and out of, as the dense story arc paints a vivid picture of Patrick Melrose’s life from his tortured childhood, to his self-destructive twenties, to the sobriety and fatherhood of his thirties. It’s also not a series made for binge watching; the show has an unconventional approach, with each episode of the five-part series based on a different book by St Aubyn.

Visually and tonally each is markedly different, and like five individual films, you will appreciate the week between episodes in order to fully process each one.

Adapted by David Nicholls (One Day), directed by Edward Berger, and co-starring Jennifer Jason Leigh, Hugo Weaving, Blythe Danner and Allison Williams, among others, the show has significant heft in terms of talent and pedigree. It was also executive produced by Cumberbatch himself, and he admits it was initially something of a juggling act.

“You have to wear different hats at different times. On some occasions I found that a little bit confusing, but mainly I was more of a producer in prep and pre-production, helping whenever my acting allowed to assist with putting the production team together to the cast. Then you let everyone else take over.”

The original books are slightly atypical in that they were both critically acclaimed and found a huge audience – they are widely regarded as one of the major achievements in English literary fiction.

Any screen adaptation of a popular tome or tomes must take care not to alienate devotees, of which Patrick Melrose has many. Of course, Cumberbatch is well-used to portraying iconic literary figures but much like with Sherlock, he hopes to bring Patrick Melrose to a new audience. He says viewers are in for “an unexpected treat”.

“I hope they’ll be really entertained by some extraordinary material rendered by some of our most loved actors, young and old, and shot in a novel and beautiful way.”

Benedict Cumberbatch may be the marquee name, but Patrick Melrose has a stellar supporting cast.

Given the subject matter, it’s clear from the off these are not sympathetic characters. Yet Academy Award nominee Jennifer Jason Leigh and Hugo Weaving give showstopping performances as Patrick’s parents.

Leigh is a revelation as troubled alcoholic mother Eleanor. Under the control of her abusive husband, and in deep denial of what is happening between son and father, the role is a complex one.

Eleanor is portrayed at two different stages of her life – as a relatively young mother and then towards the end of her life. “Physically it was very challenging. She’s a different age in every episode and I had the flexibility and desire to make it real,” says Leigh.

Hugo Weaving (The Matrix) is compelling as the brutal David, Patrick’s father and is hugely convincing as he weaves his sadistic control over his family.

Weaving describes the character of David as, “a monster, he’s absolutely monstrous but he’s a human being – and there are monstrous human beings in the world.”

Patrick Melrose begins on Sunday, May 13th, at 9pm and on demand on Sky Atlantic.