No turning back: why the switch to an electric car is forever

Once they’ve gone electric, most drivers say they would never go back to diesel or petrol

Liam has worked out the total running costs of his car at €6 a week or €300 a year. “I drive about 500 kilometres per week and I have calculated that it costs me 1.2 cent per kilometre for that," he says. 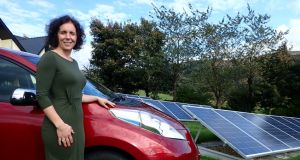 Clodagh Carthy: `I am saving €50 a week on running costs. I reckon the car will pay for itself over five years. I get about 140 kilometres from an overnight charge costing €2’

It seems that the most difficult obstacle for a motorist to overcome when making the switch to an electric vehicle (EV) is their own mindset. With the range of vehicles available on the market now standing at 19 but growing all the time, grants and subsidies worth up to €10,000 making them price competitive with petrol or diesel equivalents, and annual running costs of just a fraction of the internal combustion option, the choice should be an easy one to make.

That’s certainly the opinion of Clodagh Carthy who says she made the switch for purely practical, economic reasons. Having lost her husband four years ago, the mother-of-three is extremely cost conscious when it comes to managing the household bills.

“I put solar panels in the garden back then to save on electricity,” she says. “Although I am selling some electricity back to the grid, I thought it would make more sense if I could use that excess power myself for charging an electric car.”

She had been driving a 00 reg Ford Focus, and had planned to change it in 2017, but made the move earlier than anticipated following in-depth research into EVs.

She describes her decision to purchase a used Nissan Leaf in January of this year as “pretty much an impulse buy.”

“I sat down with a friend one evening and we did our research and when I looked at the Nissan Leaf I found that the savings would make it worthwhile to buy straight away.

The car has met or exceeded all her expectations so far. “From the moment I sat into it I loved it. The smoothness of the drive, the great sound system, it seems to just cruise along the road. It’s also great at taking off at traffic lights and that’s really good for getting onto roundabouts and motorways as well.”

While the environmental benefits are appealing, her main motivation in buying the car was financial. “I am saving €50 a week on running costs,” she says. “I reckon the car will pay for itself over five years. I get about 140 kilometres from an overnight charge costing €2. It suits my driving needs perfectly. I think electric vehicles are becoming a no-brainer for people now.”

Kieran Flynn is another for whom finance was top of mind. He has been driving Mitsubishi cars since 1990 and made the switch to a Mitsubishi Outlander PHEV (plug-in hybrid electric vehicle) two years ago. This combines the best of both worlds in a four-wheel-drive electric vehicle with a range of more than 50km with a petrol engine which kicks in whenever it is required.

He first came across the car in July of 2014 when invited to a demonstration by his local Mitsubishi dealer in South Dublin. “They had three demonstration vehicles in and they sold three cars and another two later in the week. The car is excellent. I had two Outlanders before this and the PHEV performs exactly the same as them.”

Well, not quite. Fuel economy is dramatically improved. “I get 1,200 kilometres for 37 litres of petrol. When you add in the cost of overnight charging the cost per kilometre varies between 4 cent and 8 cent depending on the type of driving involved. The real advantage of the car is economic.”

The environmental benefits come as an added bonus. “Doing my bit for the environment is good as well. I collect military vehicles as a hobby and they are not the most eco-friendly, so driving a PHEV is good in that regard.”

He wouldn’t consider buying a petrol or diesel car again and is now driving his second Outlander PHEV. “I got a very good trade-in on my first PHEV so that’s not a concern either. The car is absolutely excellent and I’d never go back.”

Liam Brady is also on his second electric vehicle having recently changed from a Nissan Leaf to a BMW i3. For him, the environment, and the technological innovation involved, were key considerations.

“I have always loved new technology and gadgets”, he says. “I knew about electric vehicles and I knew how good they were. I did a lot of research on them and figured they would suit my lifestyle perfectly. I would typically drive 70 kilometres a day to and from work from Navan to Ashbourne and I knew that an EV would be perfect for that. I’m also quite big on the environment. EVs have zero tailpipe emissions and even with the overall environmental cost of manufacture they are still very good.”

He bought the Nissan Leaf in 2014 and, like Clodagh Carthy, found it met all his expectations. “It was so reliable and cheap to run. The acceleration is fantastic – it’s fully automatic and you have full revs from zero kmh. It’s so nice to drive and so much fun.”

He upgraded to the BMW i3 partly owing to frustration with the public charging infrastructure. “You very often find that the public chargers are blocked by ordinary cars parked in the spaces and there doesn’t seem to be much enforcement to prevent that. You frequently find that the chargers are not working or broken and something needs to be done about that. I’ve been caught out a few times with that.”

The BMW comes with a range extender which is a small petrol tank and electric motor which effectively doubles the 120 to 130km electric range of the vehicle when needed. It should be noted that this is not a normal car engine but an electric motor powered by petrol instead of battery.

He has worked out the total running costs of his car at €6 a week or €300 a year. “I drive about 500 kilometres per week and I have calculated that it costs me 1.2 cent per kilometre for that. I was spending €50 a week on diesel before I got the Nissan Leaf.”

That’s a pretty compelling financial argument. “I can safely say that once you have an electric vehicle you would never go back to a petrol or diesel car.”

For more information about electric vehicles and the grant available visit www.seai.ie/evgrants