Making the change to life in the electric lane 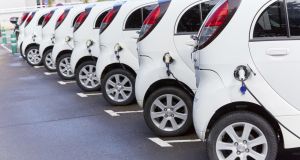 According to the SEAI, a new electric vehicle will cost 74 per cent less to run than a comparable new diesel engine car. Photograph: Getty Images

If you’re cursing the cost of your long commute, there is one dead cert way to save and still rack up the miles. From VRT relief to sustainable energy grants, the benefits of being an electric car owner extend far beyond simply being environmentally friendly. These generous incentives, coupled with low running and maintenance costs, mean more car buyers are starting to look at electric cars as a viable alternative to petrol or diesel.

If you decide to go electric, the Sustainable Energy Authority of Ireland (SEAI) are offering substantial grants of up to €5,000 for new vehicles. The VRT relief available for electric car owners bumps up the savings by another €2,500 to €5,000, depending on the car in question. That means that those purchasing a new electric car can save between €5,000 and €10,000. Subsidies are also available for installing an at-home charger.

And that’s before the everyday running costs are considered. According to the SEAI, a new electric vehicle will cost 74 per cent less to run than a comparable new diesel engine car. Charging the vehicle at a public point remains completely free. The cars also qualify for the lowest rate of car tax, at just €120 a year.

Another big boon for commuters is reduced toll charges – full electric cars avail of 50 per cent cheaper tolls, while hybrid models get a 25 per cent discount. The Dublin Port Tunnel also offers significant discounts during off-peak hours. These savings are capped at €500 annually, but for regular commuters it’s a more than welcome saving.

It’s therefore not surprising that, according to the SEAI, the majority of their electric cars are purchased in the commuter belts around Dublin and Cork. Nicky Deacon fits this bill. Commuting from Courtown, Co Wexford, to Dublin for nursing college four times a week meant that the mature student was spending a minimum of €60 per week on diesel.

“I hadn’t planned on changing my car until I’d qualified [as a nurse] in two years’ time, but back in April I kept reading about how diesel was going to become obsolete and my car had quite high mileage. It coincided with our wedding anniversary and we said we would go look at cars and I fell in love with it there and then.”

The object of Deacon’s affections was the new Hyundai Ioniq, and she says going electric was the best motoring decision she has made. “I bought the car where I had bought my previous car, and I had a good rapport with the guys in the garage, who were really helpful. I had a test drive and just loved it.”

Deacon admits, however, the grants and subsidies played a big part in her decision. “I wanted to buy while these generous grants were in place. I got over €10,000 towards the cost of the new car – meaning what should have been €40,000 really only cost me €30,000. The home charger grant of €600 was also great.”

“Commuting to Dublin four days a week meant I was doing about 1,000km a week, which was costing me around €60, as my car was quite economical. But now using my home charger means it costs me max €8.80 a week, or I can use the charging network which is completely free. The road tax is also so cheap and half the cost of [that of] my old car. It’s a no-brainer.”

Moving from diesel to an electric vehicle means a complete change in driving mindset, adds Deacon. “It’s super cool to drive and it’s a completely different way of driving. You can drive it in sport mode which is really zippy, but if you feel it’s tight for charge you can just drive it in eco mode, which means you’ll get a few extra kilometres out of it.”

For most drivers, range is their biggest concern when thinking of going electric. Being stranded on the motorway is not something anyone wants to sign up for, Deacon admits. Yet she has been pleasantly surprised at how quickly she has adapted to managing her charging.

“I get roughly 200km out of a full charge – a little bit more in summer actually, it goes up to 230km with the warm weather. I was a bit panicky at the start but once I got my home charger I knew I’d be ok. I am also really lucky that there is a charging point in my village, I can plug it [the car] into charge and then walk the few minutes home, before returning to a fully charged car.”

The car is technically Deacon’s, but she admits the whole family have been using it. “The unwritten rule is that whoever is going the longest distance uses the electric car. It makes more sense as it’s the cheapest, if not practically free. I am finished college for the summer and my husband has been using it going to work.”

The low running costs extend to maintenance – instead of a typical service, electric cars just need a brief “health check”. “It’s just basic stuff like wipers and tyres that need a look, there is so much less that can go wrong.”

Deacon reckons she would have gotten an electric car eventually, but is thrilled she did so sooner rather than later. “This is the future and we all just need to get on with it. Diesel cars are going to be banned from major cities soon enough so it’s something we all need to think about. My two teenage boys are all about being green and eco-friendly so my carbon footprint was something I had on my mind.”

Up to 40 electric vehicles are available on the Irish market and qualify for an SEAI grant. These include models from: