Charting the drive towards electric car dominance on Irish roads 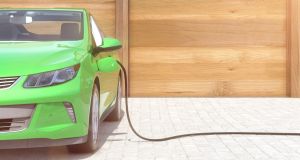 By 2020, standard EVs will have ranges of 400 to 500km. That’s very suited to Ireland’s size. Prices will also continue to fall as volumes build.

Deteriorating air quality in major cities across the developed world, coupled with rapid advances in technology are combining to create the conditions where electric cars will take over the roads from their internal combustion counterparts.

This changeover will likely be led by the auto industry, according to Graham Brennan, EV programme manager with the Sustainable Energy Authority of Ireland (SEAI).

“Probably the first important step towards reducing vehicle emissions occurred a number of years ago when the car industry agreed to cooperate with the EU on emission targets,” he says. “They got together and said they had to get the average CO2 emissions down to 95g per kilometre by 2020.”

That resulted in the mass shift to diesel cars over a relatively short period of time. Brennan explains that diesel engines have a natural advantage over petrol when it comes to CO2 emissions. In simple terms, engines that run hotter have better fuel efficiency and therefore produce less CO2 emissions.

This worked well, to a point. Evidence of an unintended side-effect began to emerge after a number of years. “Cities around Europe are experiencing increasing levels of air pollution and smog,” says Brennan.

While countries based their vehicle taxation on CO2, a climate change gas, this favoured the diesel engine. Meanwhile, the performance of cars in the real world was being ignored. The toxic gases such as nitrogen oxides (NOx) and carbon monoxide which affected the air quality in our cities was on the rise.

Smog is caused by NOx and soot. It turns out that diesel engines can emit far more of it than their petrol-powered cousins.

The cure has almost turned out to be worse than the problem and cities like Stuttgart in Germany are already imposing diesel bans on days when smog and air particulates rise above certain levels.

Going back to petrol clearly isn’t a solution given the climate change implications, and this is where electric vehicles (EVs) come in. “The electric car is a get-out-of-jail card for the industry,” says Brennan. “Necessity is the mother of invention. We are now in a situation where we have to achieve zero emissions from cars, in cities at any rate. The technology to do that now exists.”

In the first instance, the development of high energy density batteries is increasing the driving range per weight of battery.

“The IT revolution led to the development of much higher energy density batteries,” says Brennan. “Early generation lithium batteries offered three times the energy density of lead and now with improved chemistry and battery design that has reached eight or nine times.”

The cost of batteries will also come down, he predicts. “As EVs become more popular, increased production volumes will naturally reduce the costs of batteries.”

Add to that the increased efficiency and reduced size and weight of motors and the combination becomes irresistible.

“Modern electric motors are highly energy efficient operating in the ranges of 85 per cent to 95 per cent depending on RPM,” says Brennan. “And that’s topped off with regenerative breaking which makes the car more efficient still. The latest motors are now using super-magnets which make the electric motor lighter and more powerful than their forerunners. Today’s 270kW electric motor would sit easily on a coffee table – it would take a full 2.7-litre turbocharged petrol engine to deliver that much power and consider the size of that.”

These advances will quickly lead to a situation where EVs are the natural first choice for motorists. “They are already very attractive from a cost point of view. The Government grants from SEAI and VRT relief have reduced the price considerably and running costs are already 75 per cent lower than diesel equivalents and falling.

By 2020, standard EVs will have ranges of 400 to 500km. That’s very suited to Ireland’s size. Prices will also continue to fall as volumes build. It will not be very long before EVs will be at the top of everyone’s list when it comes to buying a new car.”

There are now more than 40 types of electric cars available on the Irish market.

You can find all the information you need, including a list of almost 150 retailers where you can test-drive an electric car, at drivingelectric.ie

SEAI grants and VRT relief worth up to €10,000 along with lower running costs, low rates of car tax, and other savings have combined to make 2018 a bumper year for electric car sales.

Senan O’Connor of Vantage Point Video made the change in January and says he hasn’t looked back.

“I clock up 20,000 miles a year and spend about €2,000 on fuel. By switching over to an electric car and using my home charger and public chargers I now spend about €400 per year on fuel for the same mileage.”

Senan opted to go for the Nissan Leaf. “I don’t have what you might call a conventional commute. I live in west Cork and my job takes me all over the country filming events. I go out on long trips, probably one every fortnight or so. I’ve done several long trips of over 600km in a day, even doing 1,200km once.”

For most drivers, range is their biggest concern when thinking of going electric. Making some small changes to how you drive and a little forward planning, O’Connor claims, is all that is needed to overcome it.

“I’m deeply involved in motorsport and some of that experience has come into it. Just like a rally driver has to manage the amount of fuel they carry, you find yourself adopting a strategy for managing your fuel. Eventually it becomes routine. Just like with your petrol car you build in stops along the way and you get to know where all the best coffee is too.”

Senan reckons electric cars will become the norm, and that motorsport and car enthusiasts will be the ones to lead the way;

“At the start of the year, I turned up to cover a motorsport event in Co Clare in the car and we were all joking about it. The second time, there was a noticeable shift in their attitudes. People knew more about electric cars and were more open-minded.”