Redbreast whiskey: the craft behind its world-leader status

For many, Redbreast is regarded as the essence of Irish whiskey. Not only is it one of the most-awarded Irish whiskeys in the world, it also ranks as the biggest-selling pot still whiskey globally too.

Defined as a traditional-style Irish whiskey with a huge influence from the Spanish oak sherry-barrels in which it is aged, the triple-distilled Redbreast harks back to the late 1800s when Irish whiskey was the biggest-selling spirit in the world. It hasn’t deviated from its production style since, cultivating a cult following among whiskey lovers.

Irish whiskey has been experiencing a huge rise in sales and popularity in recent years and Redbreast has been one of the main beneficiaries - largely because experts define it as the true and quintessential style of Irish whiskey.

Gerard Garland holds the title of Irish Distillers whiskey ambassador, a role that involves championing Irish whiskey and its production process. With 15 years experience in the drinks industry, his understanding of the brands, the stories behind them and how the whiskey is made, make his knowledge unrivalled.

Here’s his essential guide to Redbreast:

Describe the flavour of Redbreast
“Triple distillation is at the heart of Irish whiskey and we use onion-shaped copper vessels called pot stills, which are ideal for distillation. Each distillation, refining and collecting the purest distillates, results in a final spirit that has a clean and spicy flavour.  But it’s the exposure of the spirit to copper and the contribution of the unmalted barley that creates desirable congeners. These give Redbreast a wonderful pepperiness, followed by a creamy mouthful. It’s like a buttery or creamy mouthful on the centre of your palette.

“You’re also getting an explosion of fruit flavours like raisins and sultanas, even a hint of cinnamon. You also get that aged-oak flavour, which is a pleasant robust feel, and there’s a balance of tannins there as well because of the wood barrels – that adds a nice dryness. Then there are other compounds like vanillin, which gives you that little vanilla hint. Overall Redbreast has a Christmas cake character that is its real signature – but for all-year round enjoyment.” 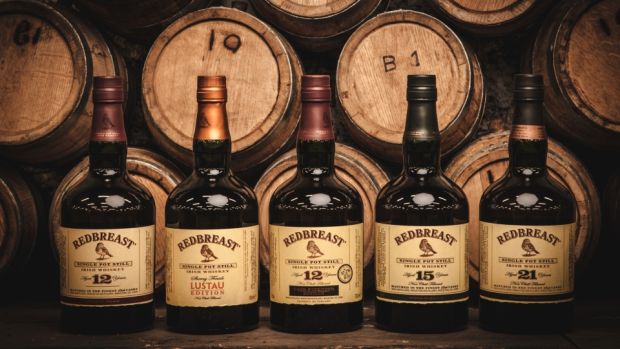 “The 15-year-old is made with the same component whiskeys, the same wood, and the same barrels as Redbreast 12-year-old and 12-year-old cask strength. The difference is the substantial aging in oak barrels for 15-19 years. This mellows out the whiskey, leading it into a fresher flavour with hints of lime and citrus, leaning towards greener berries than the sultanas of the 12-year-old. The flavour becomes mellow with the succulence of fleshy fruits. The longer interaction with the wood gives you this change in flavour and complexity.

“The 21-year-old is slightly different because it’s the oldest and richest style of Redbreast pot still whiskey. It has huge levels of depth, flavour and taste due to the complex and elaborate aging process of at least 21 years.”

What’s the difference between single malt and single pot still whiskey?
“Pot still whiskey is unique to Ireland. The whiskey is made from barley but it’s not a malt whiskey because it has the inclusion of unmalted barley as well as malted barley. This gives it an extra dimension - the creamy mouthful, the peppery spiciness - which is not in any other whiskey in the world.

“So, malt whiskey is made the same way but made of 100 per cent malted barley, it gives you a different taste; in Ireland we use unmalted barley as well as malted barley in the mash bill.”

What type of barrels are used to age Redbreast?
“We’ve been using American oak to make barrels in Ireland right back to the 1820s because we had no oak trees - we’d chopped them all down.  Now we source our American oak barrels from Kentucky and Tennesse.  A law in the US says you have to use a brand new oak barrel every time you make bourbon or Tennessee whiskey. That means they have to make a brand new oak barrel for every aging of either Bourbon or Tennessee whiskey and then they have to get rid of the old barrels. These American barrels produce very sweet whiskey with a sugary and white pepperiness taste.

“Redbreast is aged in Spanish barrels from a relationship with a cooperage in Jerez, Spain. The barrels are made from wood from trees in a woodland in Galicia. It’s totally controlled. The sawmill and the cooperage staff know how the barrels are meant to be. And there is a relationship with the sherry houses. Through that we’ve learned only to use Oloroso sherry barrels for Redbreast because only that variety provides the correct taste.”

Where did the name Redbreast come from?
“Irish Distillers was formed in 1966 because there were some 80 distilleries in the 1880s in Ireland, but come 1966 there were only three left in the Republic - all the others had gone out of business. But there were other companies like W & A Gilbey who were bonders and importers of sherry and Cognac. They were importing barrels of port and sherry from Spain and Portugal and what happened was there were a lot of barrels left over after consumption.

“These companies went up to John Jameson’s distillery with their empty barrels, filled them with whiskey, and aged them in their own wine cellars in Harcourt Street. They were bottling Redbreast on Drury Street, Dublin 2, right up to 1984.

“Originally they had a whiskey called JJ&S Liqueur by W & A Gilbey. That stood for John Jameson and Son Liqueur. It was a bit of a mouthful to say, so, in 1912 the chairman of Gilbey’s named a couple of his whiskeys after birds - because he was a member of the Royal Ornithological Society. And one of those was the Redbreast, which was the only one of the whiskeys to survive to today.”

What’s the best way to drink Redbreast?
“Pot still Irish whiskey, even though it has a robust, peppery mouthful, is also incredibly smooth, due to its triple distillation and because it has extra ageing. It’s a product that is recommended to simply drink neat in a nice glass.”

Redbreast is produced by Irish Distillers at the New Midleton Distillery. For more see singlepotstill.com