Redbreast Lustau: an old friend with a new whiskey perspective 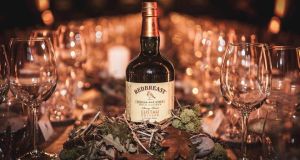 In September of this year, Redbreast Whiskey launched their Lustau Edition, the fifth permanent expression of their much vaunted label - a collaboration between Redbreast, Irish Distillers and the Bodegas Lustau in Jerez, Spain.

Lustau is seen as the premier sherry producer in that region of Iberia and the late Manuel Lozano, their former chief wine maker who died suddenly earlier this year, was regarded as one of the foremost experts in the production of fortified wine. The head blender of Redbreast, Billy Leighton, struck up a bond with Lozano, and together they collaborated on the cask selection for Redbreast’s 12 and 15-year-old vintages. The idea for Redbreast Lustau came from this collaboration and a desire to further marry the flavours of Redbreast and Oloroso sherry, the fortified wine that flavours the preferred casks for use in production of what is regarded as the world’s leading single pot still whiskey.

“Redbreast’s dominant flavour profile comes from the Spanish oak barrels that are used to mature Redbreast. The barrels are seasoned with sherry for two to three years and are then brought to Ireland, filled with Pot Still Spirit and aged for a minimum of 12 to 15 years,” says Irish Distillers whiskey ambassador, Gerard Garland. “The Spanish oak becomes incredibly dominant from a flavour profile and it’s literally the character of the oak that you are tasting. The sherry has long since faded away, and the idea of creating the Lustau Edition is to celebrate the sherry wine that is used to season our casks – Oloroso sherry.”

This production process tweaks the final flavour of the whiskey, by changing the maturation period from 12 to 15 years to nine to 12 years of age, then finishing it for one year in the Oloroso barrels. This method ensures the Spanish oak is less dominant and enables the sherry wine characteristic to come through.

“Lustau is finished for a final year in a Spanish oak barrel that has been specifically seasoned with Lustau Oloroso sherry in Bodegas Lustau in Jerez. You really get that sherry character to the fore of the palette, as opposed to Spanish oak,” says Garland. “This makes the sherry taste fresher, because it’s younger and not dominated by the rich heavy, raisin, dusty, oak character that you get in a 12-year-old, it’s lighter in style but has a higher percentage of alcohol - you have 46 per cent alcohol as opposed to 40 per cent - and that also affects the flavour.

“Lustau has a lovely gingerbread character to it. The barley character as well as a the fresh sherry character, combined with the pepper and spice of traditional pot still whiskey almost gives a ginger richness; to the fore of the palette you can get a soft tannin character that you would get from a grape as opposed to the rich wood tannins. It has the white grape character of the Palomino Fino grape – a bittersweet character. It’s a lovely contradiction to the silkiness of the unmalted barley.”

Launching a product of such variation from the much-loved and respected taste of Redbreast carries its own risks in terms of deviating too far from the norm and the celebrated path but in the short time Lustau has been on shelves and in glasses it has made an immediate impact with the public. “It’s been incredibly well received,” says Garland. “The acid test for me comes from distinguished groups such as the Celtic Whiskey Club or the Irish Whiskey Society and those groups have found it a hugely accessible whiskey that they say is like looking at an old friend with a new perspective.”

The expert reaction to the Redbreast Lustau Edition

Jimmy Redmond, owner of Redmond’s of Ranelagh, one of Ireland’s premier off-licences, sees the fifth Redbreast as superb addition to their canon.

“Lustau is a wonderful edition, it’s a marriage of two premium brands. Lustau has always been revered as a really high-end sherry and to marry it with Redbreast is a perfect match,” says Redmond. “From a taste preference, I prefer it after it’s been in the glass for a while, when a lot of the really pungent favours at the start have subsided and you’re left with a really delicate style. You taste the classic Oloroso style in the sweeter fruits coming through. It’s full, smooth and complex on the mouth. The Lustau is a perfect mid-point between the 12-year old edition and the 21-year-old edition.”

Jim Rafferty, manager of The Dylan Whisky Bar in Kilkenny – which was named Best Whiskey Bar in Leinster 2016, has seen an overwhelmingly positive response to the launch of Lustau. “The reaction has been fantastic, especially at this time of the year as it is very Christmassy,” says Rafferty. ‘With regards the nose of it I get strong almonds and orange, the same flavour you would get from Cointreau – that orangey feeling and cloves and sultanas. On the palette it’s creamy and milky like chocolate and honey. The Oloroso sherry flavour then brings out walnuts, poached plums, apple and crushed cinnamon.

“It’s very popular not just with the older clientele, we’re finding that it’s very popular with the early- and mid-twenties whiskey drinkers. The expansion of the range is great for single pot still whiskey and Irish whiskey in general. Plus its price point would be very good as well.”

The distinctness of Lustau from the rest of the Redbreast editions has marked it out on its own in terms of taste and that is its defining character, according to Will Murphy of the South East Chapter of the Irish Whiskey Society. “What I like about it is that it’s completely different,” says Murphy. “It’s more of a buttery finish –as I would call it - as opposed to the normal Redbreast because of the sherry finish. You can tell straight away when you taste it that the distillers are going down a different route. I’ve yet to meet anyone who doesn’t like it.”