A story of Irish whiskey

There is a rich history behind some of the leading names in Irish whiskey, according to Irish Distillers' archivist Carol Quinn 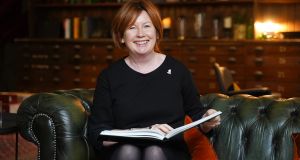 Archivist Carol Quinn on Jameson whiskey: “I really can't think of another product indigenous to Ireland that is so well received all over the world.” Photographs: Conor Mulhern

“I found this wonderful history that was quite literally all around,” says archivist Carol Quinn, who began sifting through the paperwork of Irish Distillers seven years ago. “It was in ledgers, and books, and documents, underneath people's desks, up on shelves, in grain stores, and in the cooperage.”

One of the most illuminating finds for Quinn was seeing how esteemed Irish whiskey was worldwide in the 19th century. “I was surprised when I looked at the export records from the 1860s and 70s and I saw sales to Brazil, Mauritius, Panama, Honduras, Australia, New Zealand, and Canada. I don't think there was another product from Ireland at that time that had such a worldwide reach, and it wasn’t being sold cheaply in shebeens or taverns. It was an expensive product for the connoisseur, so if you were somebody at that time who was used to drinking champagnes or cognacs, you also had Irish pot still whiskey on your shelf.”

But the 20th century saw the market for the product systematically collapse. “It went from these very high levels of global success through the 19th century to actually being almost wiped out entirely,” explains Quinn, “and it was nothing to do with the distilleries or the quality of the product. It was all to do with external political circumstances.”

The outbreak of World War I stopped trade to many countries involved in conflict, and coupled with a threat to merchant vessels from submarines the export of Irish whiskey was effectively strangled. But the end of the war did not see things return to normal for long. “In 1919, the first year after the war, Jameson had its best ever year of production, which was really unfortunate because the following year is when Prohibition hits in America,” says Quinn.  “America was a very influential market. The bootleggers, who immediately set up as soon as Prohibition was announced, called their moonshine ‘Irish whiskey’ because people were used to paying more for Irish whiskey than for other drinks.”

The bootlegged moonshine was a far less appealing product, suggests Quinn. “It was rotgut, and people were paying a premium because it was marketed as Irish whiskey, but reports from the time suggest it tasted awful and that put a huge dent in the reputation of the drink.”

“Back home in Ireland as we head into the 1930s, there is a trade war with Britain that saw a cut-off for exports to all the territories associated with the British Empire. So one half of the market was lost through Prohibition in America, and the other half - exports to Britain, India, New Zealand, Australia - were lost through trade embargos,” she says. What followed was a domino effect of distilleries in Ireland shutting down, and as World War II started, international exports were once again effectively stopped.

By the 1960s, following decades of crisis, the market for Irish whiskey was decimated, with only two distilleries, John Power & Son, and John Jameson & Son, operating in Dublin, alongside Midleton distillery in Cork.

“Just to illustrate how bad things were, Midleton, which we consider to be the heart and home of single pot still Irish whiskey, was only distilling for three weeks a year. So you have these three firms in competition, and they're all family owned and family run, and they're known to each other.” While the economy stabilized through the 1950s, the market for Irish whiskey failed to reestablish itself globally, and domestically remained a niche and dwindling product.

“The three firms realised they have to do something incredibly radical or they are going to be wiped out,” explains Quinn. “So they begin secret talks in Tourin House in Waterford, the home of Shane Jameson, a direct descendant of John Jameson. He invited the other families under the pretext of a country house weekend, because they don't want reporters or anybody else involved. They don't even know if an agreement is possible, because there's a lot of pride in each of these individual firms and nobody wants to be the family member who signs off on the family business. But the situation is that desperate and that dire. So after two years of negotiations, they reach an agreement and they shake hands together. In 1966, they form Irish Distillers with the express function of saving the Irish whiskey category, preserving it until such a time as there's a renewed interest in the product.”

The archives detail that the alliance struggled initially. “The first few years are incredibly rocky,” says Quinn. “There's distrust between the different firms, and a lack of understanding by the different workforces. Plus there is still a lack of money, a lack of marketing expertise, and a lack of interest externally for Irish whiskey.”

The first step toward recovery was setting up a new distillery in 1975. “That’s New Midleton, and it is built to a really superior technical design with the idea that it would be able to produce the different styles of whiskey that had traditionally been produced by the three firms, but in one location,” says Quinn.

“They worked really hard with this and took in a lot of external consultation, which all pointed to the fact that people’s tastes had changed, single pot still whiskey seemed a little daunting and consumers were looking for a lighter whiskey blend. They were advised to put all the effort behind one brand, and the brand that they considered to have the best chance of success was Jameson.”

While the demand for traditional single pot still whiskey remained low, and production was focused on Jameson (a blend of pot still whiskey and grain whiskey), the distillery did keep producing single pot still whiskey in the background through the 1980s. “There was no market for it,” says Quinn, “but they just had this belief that its day will come. Jameson's popularity opened the door to the other brands when the time was right. Midleton Very Rare was launched in 1984, and that was a real luxury Irish product. People thought it was mad, they had forgotten that Irish and luxury could be used in the same sentence. But the game changed totally in 1988, when Irish Distillers merged with Pernod Ricard - overnight that provided the one thing that Irish Distillers were missing - a worldwide distribution network.”

Since then the market for single pot still Irish whiskey has grown through popular brands like Redbreast. Crafted at Midleton. In August this year, Redbreast 12 Year Old was awarded the highly coveted World Whiskey Trophy at the International Wine and Spirit Competition.

“That brings us to where we are now, at the crest of a wave again,” says Quinn. “I really can't think of another product indigenous to Ireland that is so well received all over the world. Due to the success of Jameson and Redbreast, we're in a fantastic period for Irish whiskey, I think that is reflected in the wider range we produce and also in the new entrants who are coming onto the scene. It is a product with such a history, and that came so close to extinction. I think it’s a story that Irish people should be rightly proud of.”