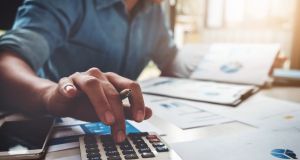 The USC was introduced in 2009 in an effort to broaden the tax base and bring in more revenue. Photograph: iStock

While better than expected exchequer returns should offer a little more room for manoeuvre, all the indications had been that Finance Minister Paschal Donohoe would have €233 million available towards tax adjustments in the forthcoming budget. At the same time, recent Brexit developments mean he has decided to commit very little, if any, of these funds on budget day.

However, it is possible that he could come back to look at tax cuts before October 2020 and, if past behaviour is any indication of future actions, we can expect the Minister’s next move to involve fairly minor or even negligible tweaks to personal taxes in order to spread the largesse around.

However, this may not be the best approach to take in the context of Brexit and other disruptions to the global economy. “The Minister and his predecessor have been doing the same thing again and again over the last four budgets,” says PwC tax partner, Pat Mahon. “He has trimmed the USC slightly and made adjustments to the middle bands. Those changes spread very small savings across many individuals, but he has spent about €2 billion in total on these slight changes over the years.”

Mahon believes the money could be better spent by making a cut to the headline 40 per cent rate of income tax and that our ambition should be to ultimately get the aggregate top rate of income and social taxes down below 50 per cent. “This would send out a very positive message to potential FDI investors that could help develop further employment opportunities in this economy post Brexit,” he contends. “Drip feeding tiny amounts doesn’t really deal with a headline tax rate that is far higher than in most countries near to us.”

Such a move would also go some way to addressing the exceptionally high proportion of tax paid by higher earners, he argues. “We run the risk of going back where we were in 2009,” he says. “There is a significant concentration in the amount of tax paid by higher earners. Fifty-one per cent of all income tax is paid by just 7 per cent of taxpayers. That covers those earning over €100,000. In all, 84 per cent is being paid by those earning €50,000 or more. That means the great majority of income tax is being paid by just 27 per cent of income earners.”

It is in this context that Mahon calls for the Minister to make a strategic move with the funds available to him. “The USC was introduced in 2009 in an effort to broaden the tax base and bring in more revenue,” Mahon notes. “Back in 2010, 946,000 people were exempt from income tax. In 2019, 941,000 are exempt.

The number of people in employment is higher so we are not comparing like for like exactly but the direction of travel is clear. At present, 35 per cent of income earners are exempt from income tax and 28 per cent are exempt from the USC. A further 20 per cent are only paying the USC at up to the 2 per cent rate and a significant number of those don’t pay income tax.”

He fears this makes the public finances very vulnerable to any slowdown in the economy. “You have to ask where the revenue is going to come from in future,” says Mahon. “If the Minister takes the view that there will be no fall in employment and wage and salary rises will continue to generate increased revenue, that’s great. But if the number of people earning €50,000 or more falls back, we risk returning to where we were in 2009 which led to the USC being introduced in the first place. It would be unfortunate for the Minister to have to look at broadening the income tax base again.”

The optics are important as well. “If we are trying to attract people from the UK and other countries to create employment opportunities here and to potentially replace some jobs that may fall away because of Brexit, the aggregate 52 per cent rate of income taxes keeps coming up time and again,” says Mahon.

“It stands out particularly in relation to the UK where taxpayers don’t pay the top rate of 47 per cent until their earnings reach £150,000. There is a big disparity there. Across the OECD countries, Ireland has among the lowest tax takes from people on average earnings. The concentration of the tax take on such a small majority of higher earners is inconsistent with the approach in most of those countries.”

Another cause for concern is the planned increases in employers’ PRSI. “It rose to 10.85 per cent last year, it is currently 10.95 per cent, and a further rise to 11.05 per cent in 2020 is already on the statute books,” he says. “This is a tax on employment and is a cost borne by employers. Any increases could have a negative impact on hiring decisions, and the Government needs to be very careful about that. We certainly wouldn’t like to see it increased any further and we believe it would be a positive move if the Minister halted the scheduled 2020 increase.”

This is especially the case given the anticipated fallout from a hard Brexit. “The Government has said it could result in up to 50,000 job losses,” he says. “That would certainly impact the tax take and any employment tax increases must be looked at in that light.”

The Minister should instead focus on measures which can have a positive impact on employment, he argues. “The Government has been drip-feeding small cuts for four consecutive budgets and all the indications are that the Minister is considering doing it again at some point in the near future. There is an opportunity to send out a very positive and confident message in advance of Brexit, and the headline rate is the place to start. These actions could leave us less exposed to future bumps in the road and would send out a very clear statement of confidence to companies looking to invest in Ireland and create further high value Irish job opportunities.”