Gender pay gap reporting should be seen as an opportunity to demonstrate an organisation’s commitment to diversity, equality and inclusion, says Kathryn Brady of PwC Ireland 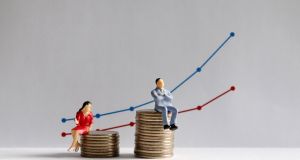 Kathryn Brady of PwC Ireland: “The gender pay gap is the difference in average hourly pay of males and females in an organisation regardless of role or seniority. It is not the same as equal pay.” Photograph: iStock

The gender pay gap has emerged as a hot boardroom topic in recent years. The realisation that equal pay for equal work was not on its own enough to guarantee true gender equality in the workplace has driven campaigns across the world for mandatory reporting on the overall gender pay gap in organisations.

This would reveal far more about the culture and values of an organisation than mere compliance with equal pay legislation.

“The gender pay gap is the difference in average hourly pay of males and females in an organisation regardless of the nature of the work, role or seniority” explains Kathryn Brady, director, People and Organisation with PwC Ireland. “It is not the same as equal pay and the two terms can sometimes be confused. Equal pay is the direct comparison between women and men’s pay for the same work. A company that pays men and women doing the same roles, exactly the same, could still have a gender pay gap if, for example, more of the lower paid roles within the organisation are filled by women. The gender pay gap is a simple measure of a more complex issue.”

Those complex issues include organisational, culture and societal biases. “There are several factors at play,” says Brady, “some within the control of organisations and some outside of their control. And sectors vary. When it comes to under-representation of women in senior roles, in the UK, where gender pay gap reporting has been mandatory for two years, the financial services sector has the highest gap. Another factor is educational occupation segregation. The health and caring occupations are seen as mainly female while technology and engineering are viewed as more male. This comes back to the traditional view of male and female roles which tends to be reinforced by society.”

Gender pay gap reporting is seen by many as one means of combating the issue. “Reporting won’t solve it, but it will highlight it and that can only help,” says Brady.

A Bill to introduce mandatory reporting here in Ireland is slowly making its way through the legislative process and “while the Bill does not give an indication of a commencement date we would expect it to become law in 2020. The exact details of the required reporting are not yet defined but the draft legislation requires employers (both public and private), to disclose details of pay and benefit differences for their male and female employees under various categories” says Brady.

Of course, companies need not wait for the legislation to pass and can make disclosures voluntarily, as PwC did in July 2019 when it became the first of the Big 4 professional services firms to do so in Ireland. The firm’s gender pay gap stood at 5.7 per cent, significantly lower than the national average of 13.9 per cent.

“We are a purpose led and values driven firm,” Brady adds. “We believe in transparency and communicating our gender pay gap is a natural step for us on our diversity and inclusion journey.”

According to Brady, considering gender pay gap now in advance of any requirement to do so is something all organisations should consider. “Mandatory reporting is coming, there is no question about it. Taking action now to prepare for it makes sense. Gender pay gap reporting requires input and support from various areas of an organisation, so identifying and involving these stakeholders as early as possible is key. Having enough time to gather the data is also important. Poor quality data was a challenge for UK employers, so maximising preparation time will ensure that organisations are confident in the accuracy of their data. In the UK, it is estimated that as many as 1 in 6 employers may have reported their gender pay gap figures incorrectly. In addition, of the 10,000+ organisations to report in the UK over 300 restated their original figures.”

Analysing an organisation’s gender pay gap now in advance of mandatory reporting is also important to understand why the gap exists.

It is an opportunity to improve diversity, enhance corporate reputation, strengthen the organisation’s brand, and become more attractive to talent

“The overall number is only one thing, slicing and dicing the figures to really understand why the gap exists is key. While the gender pay gap is not going to reduce overnight, there are some simple steps that organisations can take to improve it.

“Companies can have a gender focus in all recruitment activities with the wording of, say, recruitment ads being more open and inclusive. Another area is not asking candidates what their current pay is, that only exacerbates the problem as you can be benchmarking against other organisations’ poor practice.”

Flexibility is another issue. “If people can work from home, or for example late into the evening, that can help. Organisations should have structured, flexible working policies.”

And while virtue is its own reward there are also definite benefits for organisations which engage in looking at their gender pay gap now. “It’s much more than just a compliance exercise,” says Brady. “It is an opportunity to demonstrate that the organisation is engaging proactively with the gender pay gap. Being open about it can be a positive. It is an opportunity to improve diversity, enhance corporate reputation, strengthen the organisation’s brand, and become more attractive to talent.”